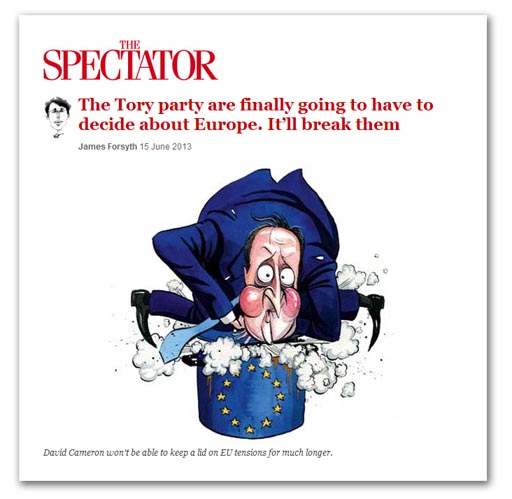 It is interesting that Tory commentators, as in "teenage scribbler" James Forsyth, are allowed to dissect the strategy of their beloved party, yet whenever one seeks to do the same with UKIP, I get blitzed by angry e-mail and a desultory few comments on the forum complaining that I'm being horrid to the saintly Farage.

Such an attitude renders UKIP more like a cult than a political party, and there is a well-known tendency of failing leaders to promote mass suicide, every one of them convinced that they are following the one true way – rejecting any other voice which might offer a different viewpoint.

Strangely though, from being a respected and venerable party, David Cameron too is beginning to take on the mantle of a cult leader, marking a remarkable convergence between the Tories and the UKIP wannabes, to the extent that it becomes increasingly difficult to tell them apart.

As the UKIP leader seeks to talk less and less about "Europe" in order to become electable, and Mr Cameron talks more and more about "Europe" in order to become electable, they begin to merge in the mind's eye. Man becomes pig and pig becomes man. They talk the same, sound the same and look the same, even down to the incipient double chins and the corpulence that comes of eating in too many fine restaurants.

But the "teenage scribbler" Forsyth doesn't quite see it that way. His intellect does not allow him to deal with more than one idea – or party – at the time. So, without looking at the interaction between UKIP and the Tories, which will define the next few years, he tries to define the next few years, using the Tory party as the pivotal point, doffing his cap occasionally to the Labour party and Mr Miliband.

The result, a trite, superficial dirge, is what passes for top-flight political analysis these days, which is possibly why so many senior politicians and their aides are ill-informed and never see things coming, until they rear up and bite them where it hurts.

Where Forsyth really has a problem though is that, in speculating about what might happen in the event of an EU referendum under Cameron's watch during the next Parliamentary term, he is attempting to dissect the unknowable. This leaves him to evaluate scenarios which can't even begin to look credible without factoring the wild card that is UKIP.

We end up, therefore, with blather – as we so often do in the legacy media. It may be quite well-written, and marginally entertaining, but it is still blather – self-referential and introspective.

The culmination of the Forsyth thesis is that he believes that it is "good news for Cameron" that Tory "unity" on Europe will probably hold until 2015 – not that you need any great brains to work that one out. There are, he says, are only a handful of his MPs who can't sign up to his "strategy" of renegotiation followed by a referendum.

After that, says the scribbler's scribbler, the Tories will not be able to put off the "big choice" much longer – whether we stay in or leave. Whichever way it goes, adds Forsyth, "there'll be those who can't accept the decision. EU membership will have split the Tories just as the Corn Laws did".

That, of course, is exactly the scenario that Farage is hoping for, but no one seems to want to look further than that point. But, as I posit on our forum, that is just when it starts to get interesting.

The Farage scenario has his party gain some MPs at Westminster, but that would – inescapably - be against the background of a heavy defeat of the Tories, putting either Labour or a Lib-Lab coalition in office. Maybe then, the Tory party does split, fulfilling the Forsyth prophesy.

The thing is, what happens then? One Tory faction, inevitably, goes over to join the Lib-Dems, strengthening the government. In the Farage scenario, the "rump" joins him, and they form a right-of-centre opposition.

Once again, we have to ask the question, what then? Short of an "in-out" referendum which is unlikely with Labour or the Lib-Labs in office, we stay in the the EU. In 2020, we face another general election. Then a weak Tory rump allied with UKIP fight a Lib-Lab alliance strengthened by Tory defectors. And what are the chances of the "Tor-IP" party winning the election then?

That much, though, is but one scenario. There are others. And outside the self-referential claustrophobia of the Spectator claque and the chattering classes in general, it may not be entirely surprising that there are other capable people out there doing their own analyses. This blog is by no mean the only place when the net is being cast wider, and thought are deeper.

Analysis, though, can change the future. Ambitious politicians – assessing the odds in a scenario that Farage does not dare to tread, and Forsyth doesn't have the wit to – have already worked it out. The "Tory split" meme is a one-way trip to nowhere – a free pass for the Left for the next generation.

Stepping aside from this for the moment, we see the French air traffic strike in progress over EU Single European Sky plans. This highlights the fact that the EU is far more than just about trade – we are talking about a scheme that aims to revolutionise air traffic control throughout Europe.

The other thing, as we pointed out, is that the Commission is right in pursuing its objectives. When the United States controls the same amount of airspace, with more traffic, at almost half the cost, something really must be done.

That the Commission has so far been unable to implement its plans also says something of the inadequacy of the EU construct, but it also says that, if we are to achieve what for the UK are laudable aims, we need a relationship with "Europe". To that extent, we need to redefine the language. We are not seeking to leave, Europe – we are seeking to redefine the relationship.

Here, in terms of his overall objective, there is actually nothing between Cameron and our objectives. As we have observed before, where we differ is how to achieve that desirable aim. And here, it seems to me that the gap is not unbridgeable. More to the point, it could provide the starting point for a Tory renaissance.

Thus, we have a different scenario where, with the help of Farage's party and the "UKIP effect", the Tories fail to win the next election, putting into place a weak Labour or Lib-Lab administration. But instead of "splits", under a new leader, the party unites behind an realistic plan to redefine our relationship with "Europe". UKIP – having done its job, melts way into oblivion.

That then brings us to 2020, when a resurgent Tory party storms to victory. Within days, the UK is sending off an Article 50 notification to Brussels and we are on our way out of the EU. Some years later, maybe, we will finally get a Single European Sky, in which the UK will play a full and active part.

The funny thing is that clever-dicks like Forsyth will never even see it coming.