EU politics: a seat at the "top table"? 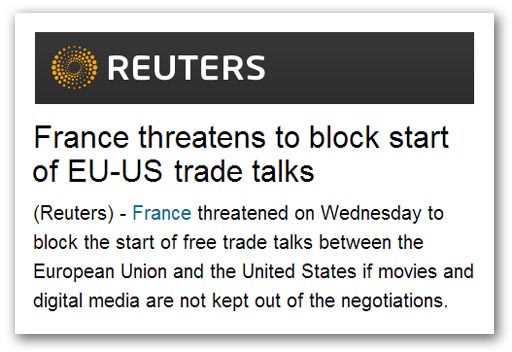 There are few things more attractive to the UK government than the idea of a nice juicy trade deal with the United States. But, as we have seen, Mr Cameron prefers to throw his lot in with the EU and negotiate at the "top table" in order to get one.

However, we just happen to know that trade is an exclusive EU competence and, as a result, we don't even get a seat at the negotiating table. We have to follow the time-honoured procedure of agreeing a "common position" between all 27 member states, which the Commission then takes to the top table.

And here we are, two days before the start of the internal EU talks to determine that "common position", and France throws a strop, demanding that films and digital media be taken out of the negotiations of it will block the "common position", which it can do, and thereby prevent the talks going ahead.

As a nation outside the EU, of course, we would have the power to deal directly with the EU, on our own behalf, and work to a mutually agreed agenda, without third party interference. But here we are, supposedly at the top table, and we can't even decide what goes on the real top table.

This really does make a mockery of Mr Cameron's ambitions and pretensions. We find that, although he and all the other member states – bar one - would be happy to go ahead, the Commission rolls over and starts making concessions to France. It, and it alone, is threatening to block progress.

The Commission says it is prepared to give member state – i.e., France - a much greater say in negotiations on film, TV, radio and Internet markets. But even then, that is not enough.

An official at French Trade Minister Nicole Bricq's office in Paris says: "Our position is clear. There will not be any negotiation over culture. We want culture to be purely and simply excluded from the talks". Thus, a veto is on the cards.

And here we can see just at the first hurdle, we already have trouble, The United States sells far more music, movies, radio and television programs to the European Union than it buys from the member states. Its net surplus for the sector averaged €1.5 billion a year from 2004 to 2011.

Now wait for agriculture, and see what happens. Do we remember the "banana wars" and remember how long they took to resolve? For sure, the 20-year dispute was with Latin America, but there were US interests behind it, and those delayed the settlement. And now, we are to have the complete range of agricultural products thrown into the pot.

Basically, a trade deal with the US always was going to be difficult – but it might just be possible between the US and the UK. But to reach an accord between the EU and the US is nigh-on impossible. Thus, because Mr Cameron wants to be at the wrong table, and mistakes it for a top table, he would condemn us to failure.

The thing is, why does he think us so stupid that we won't realise this?