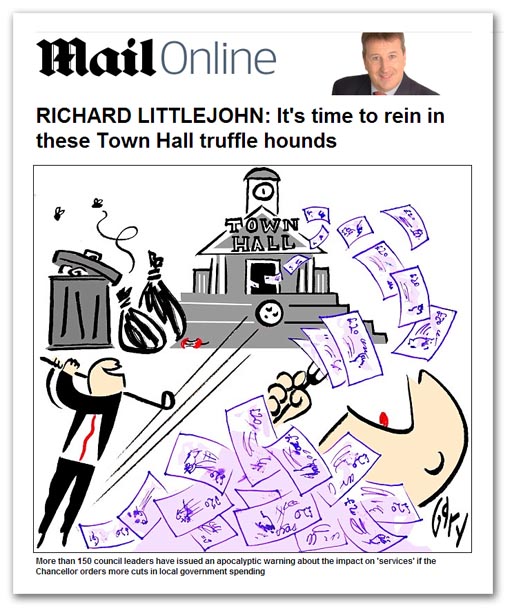 Councils in Britain are responsible for Ł114 billion of taxpayers' money – more than double the defence budget – says the Daily Express, then going on to complain about "waste" and "perks" amounting perhaps to several hundred million, as recorded by a Channel 4 Dispatches programme.

This is all very well and good but, if local authority spending was as low as a mere Ł114 billion, I wouldn't begrudge them a few hundred million bunce.  As it happens, the latest figures (2011-12) give us an annual expenditure of nearly Ł162 billion, close to four times the defence budget and nearly Ł50 billion higher than the Express figure.
To our surprise, though, that figure of near Ł162 billion actually represents a cut from Ł172 billion in 2010-11 and Ł168 billion in 2009-10. Pathetic though the cut is, representing about six percent on a historic peak, we have local authorities whinging about the scale, claiming they have taken a 33 percent cut in central government funding since 2010.

The low-circulation Observer then translates this into a generic cut, giving the casual reader the impression that there have been swingeing double-figure cuts across the board, instead of a paltry six percent reduction in overall spending.

What we are not told either is that the cut represent only a relatively modest clawback from a situation where the total government grant of nearly Ł24 billion in 1997-98 more than doubled to reach just short of Ł58 billion in 2010, the last year of the Labour administration.

What has not been properly explored is the way that, as central government has reined back its grants and imposed limits on Council Tax, local authorities have upped their charges for a wide range of local services, and developed new revenue generation schemes of dubious legality. Thus, by 2009-10 we saw that "sales, fees and charges" plus "other income" almost matched Council Tax, a situation that has continued ever since.

Yet, while even the Guardian is beginning to realise that there is something amiss, with local authorities using traffic fines as a means of revenue-raising, the media have not joined up the dots. Councils are making up for the drop in government grants and a freeze on Council Tax by upping their revenue-generation activities.

Entertaining though it might be to have the likes of Littlejohn huffing and puffing about "waste and perks" – and rightly so – no one seems to be looking at this development, and pointing out that revenue-generation has become a vast new industry, gouging billions from the pockets of the public.

I suspect that one of the reasons for the lack of coverage is the delay in producing statistics, with the latest volume only published a few days ago, covering only the period until April 2012 – more than a year ago.

But even this tells you that local government accounts for 23 percent of "total managed expenditure", making councils responsible for nearly a quarter of all public spending. This is serious billions and, after deducting the "non-grant income" - i,e. local revenue generation -it amounts to a Ł135 billion cost to local and central government taxpayers, or Ł2,544 per head in 2011-12.

Not anywhere though, will you get serious reporting or any evidence that the national media begins to understand what is going on in local government. All it can manage is the occasional cheap shot round the fringes, in this case picking up on Ł262 millions-worth of expenditure over six years - less than Ł50 million a year for an operation which spends nearly Ł500 million a day.
Scrutiny at all levels is needed but here we have the media chasing the trivia and missing the big picture. It needs to follow both.