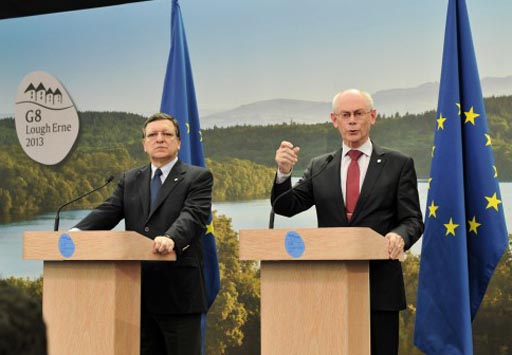 Noted by Autonomous Mind and Facebook is an article with links in perfectly with my earlier piece on the US-EU trade deal.

The article is in the Canadian Globe and Mail which tells us that the latest "Canada-EU trade deal" is threatened by infighting. This is the Comprehensive Economic and Trade Agreement (CETA), which was launched in June 2009, almost exactly four years ago.  It is still nowhere near completion, and they think the US-EU deal is going to take a mere two years?

And there I was last night, writing of the US-EU deal, "As time goes on and the talks begin to stall, optimistic stories will be replaced by tales of delays, bad feeling, and political infighting – all focused on the failure of the EU to close the deal". Now we see reported that, "Canadian trade negotiators are running up against bureaucratic infighting among European Union officials".

The Globe and Mail is retailing that that Canadian prime minister might have to return home empty-handed after week-long negotiations, after EU officials backed away from earlier commitments.

In more than one instance, the Canadians feel they had locked down agreement with the Europeans on a topic, only to see that consensus unravel because directorates in the EU bureaucracy hadn't signed off on the terms. They say this has happened in negotiations over trade in services, slowing the momentum of the talks.

"The EU side seems increasingly incapable of getting its act together to close a deal", one Canadian source says. "The various competing directorates within the EU are fighting each other, which is leading to erratic moves such as backing away from earlier commitments – actions that are on the verge of bad faith. The EU has to demonstrate it's serious about cutting a deal".

And now, bang up to date, we see a picture from the G8 summit and, from behind their wheelie bins, we see the real power behind the group (above), with Van Rompuy and Barroso delivering their end-of-summit joint statement.

"Together with US President Barack Obama", they said, "we launched the historic negotiations for an unprecedented Transatlantic Trade and Investment Partnership between the European Union and the United States". There was not a mention of Mr Cameron.

Despite the attempts by the likes of Caroline Spelman to talk up the Conservative leader, that statement reflects the reality. It is this pair, not Mr Cameron, who will be running the European end of the negotiations, and we'll soon be seeing exactly the same dynamics about which the Canadians are complaining.
At the moment, the talks are in the honeymoon phase. But, by 2015, when they are supposed to conclude, Mr Cameron will be facing the general election and his mind will be elsewhere. The talks will have entered a trench warfare stage, and we will hear little from the Conservatives, as the supposed deal will be nowhere in sight.

The following year will be the US general election and, as the implications for different states become apparent, presidential and Congress candidates will be briefing against the aspects of the deal in the "loser" states, in favour of "American jobs" and local pork. This will add layers of complexity and make settlement an impossibility.

By the end of that year, as have the Canadians now, the Americans will have fallen out of love with the EU. President Obama will be out of office and Mr Cameron will be long gone. Even Van Rompuy and Barroso may be gone, but whoever is left will be talking to themselves.