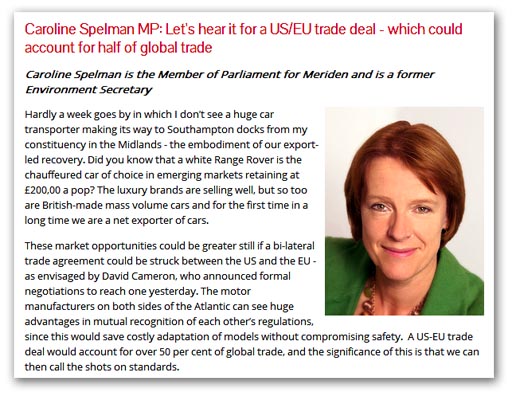 Caroline Spelman, former environment secretary, writes in Conservative Home, praising the US-EU deal. And, to argue the utility of our membership of the EU, she chooses to focus her attention on the car trade and the advantages of mutual recognition of each other's regulations, via the deal.

A US-EU trade deal would account for over 50 per cent of global trade, and the significance of this, she says, "is that we can then call the shots on [vehicle] standards".

Frankly, I don't know what is sadder or more alarming – the fact that we don't call the shots on standards any more, or that a former environment secretary doesn't know this. But, as we pointed out in an earlier post, vehicle regulation is an exclusive competence of the European Union which, in turn, is an active player in the automotive global harmonisation process through the UNECE and the World Forum for Harmonization of Vehicle Regulations (WP.29).

This, we also learn through this Commission Working Document, and in particular page 5, which tells us:

Active participation by the European Commission in activities related to the 1958 and 1998 [UNECE] Agreements is crucial to ensure that EU interests are taken into account. Therefore, European Commission services continuously increase their involvement in the Geneva technical legislative process, in particular by working within WP.29 and its subsidiary bodies in order to ensure harmonisation between UNECE Regulations and EU legislation. This is particularly important since Regulation (EC) No 661/2009 on the general safety of motor vehicles (the GSR) repealed numerous EU Directives and replaced them with UNECE Regulations.

Generally, the European Commission and the EU Member States take part in the preparatory work of the UNECE working parties. If it becomes obvious at this stage that further discussions between experts are necessary, an informal working group may be set up within a working party with a view to making progress in the development of the Regulations. This may occur where there is a rapid development of complex new technologies. The European Commission is attentive to ensure its active participation in those informal groups where sensitive and important issues may be dealt with. Following on from the work done at this stage, a vote by the European Commission at WP.29 in favour of adopting any UNECE Regulation, or an amendment thereof, is preceded by the adoption of a Decision according to which the authority to vote in favour is granted to the European Commission. This is done in accordance with the procedures set out in the Council Decisions on the accession of the EU to the 1958 and 1998 Agreements. As a result of this, the European Commission exercises the right to vote in WP.29 on behalf of the EU and its 27 Member States.

As it stands, the United States, although a founding member of UNECE, does not apply the vehicle harmonisation agreements. Thus, UNECE Regulations are not recognised in the US and vehicles exported to the United States have to undergo type approval mandated by the Federal Government.

In the unlikely event that there is an US-EU deal agreed, what will then happen is that the US will work through the UNECE/WP.29 process, on the basis of existing agreements. Then, the regulations will be agreed between the big players - the Asian countries, including Japan and South Korea (with India an equally important player), the United States and the EU, all of which will have seats at the top table.
The UK. of course, will not have a vote, much less a seat. It is represented by the EU and, as we see, the EU votes on standards, on behalf of 27 (soon to be 28) Member States. Thus, we do not now "call the shots on [vehicle] standards" and we will not ever "call the shots", as long as we are members of the European Union. To "call the shots", we have to leave.