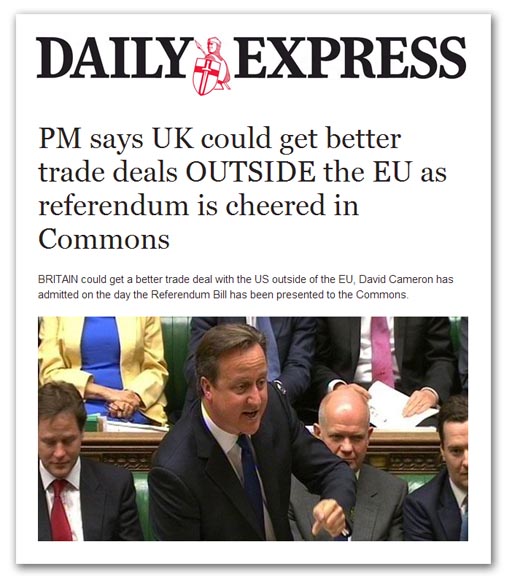 The piece itself is accurate enough and reflects the Hansard account, where a question was asked by Tory eurosceptic David Nuttall. He wanted to know whether Britain could have secured a better trade deal with the United States if the European Union had not been in charge for the past 40 years.

The negotiation on the so-called Trans-Atlantic Trade and Investment Pact (TTIP) have yet to begin in earnest, and Mr Cameron acknowledged that: " … if Britain wanted to leave the European Union we could and then we could make trade deals with every country in the world and that is a path open to us".

This answer hardly suggests that we would be better off out and, furthermore, it was only one of two questions addressing this same issue, the other having been asked earlier by Lib-Dem Martin Horwood. He had reminded Mr Cameron of his closing remarks at the G8 summit when he had said, "If Britain weren't in the EU you would not directly benefit from an EU/US trade deal", then asking: "Is it right that Europe means jobs?" The prime minister had responded thus:

The point I was making—I hope the hon. Gentleman will quote me in full—is that if Britain were not in the European Union we could reach our own trade agreements with different parts of the world, but I believe we benefit from being part of the single market, and obviously part of bigger negotiations where we have a huge amount of heft in delivering these deals. The EU-Korea deal has been positive, and I think the EU-Canada deal will be positive and completed very shortly. The EU-US deal obviously has more potential than all the others put together.

This is far more in tune with the strategy which is evolving from the prime minister. The stakes are summed up by Wall Street Journal, which has the EU's leadership embracing the EU-US deal in an attempt to demonstrate that the European project still has something positive to offer its citizens beyond recession and grinding austerity.

For Mr Cameron, though, this is far more than just a trade deal. It is central to his campaign to reconcile the UK to its membership of the EU before the promised referendum, the paper having him betting that a successful TTIP will substantially reduce the pressure on him to deliver a comprehensive renegotiation of the terms of British membership before 2017.

For the Express - the only national newspaper currently to favour withdrawal from the EU – to misrepresent Mr Cameron's position is to do the eurosceptic community no favours. For, as the WSJ is keen to point out, he would have it that the UK could not only never secure such a deal on its own, it would be a major competitive disadvantage if it were to put itself on the outside.

Says the WSJ, "already, Switzerland, Norway and Iceland, whose membership of the European Free Trade Association is often held up by euroskeptics as a model for future British relations with the EU, have expressed concern at the potential economic consequences of being left outside a potential trans-Atlantic free trade zone".

Such is the message EU supporters have been assiduously trying to convey, and indeed the EFTA countries have indeed been expressing their concerns. But recently, when EU trade Commissioner De Gucht and Icelandic Foreign Minister Skarpheđinsson met to discuss this very issue, De Gucht was quick to stress that the potential benefits of TTIP "will be especially true for its closest trading partners - for example: those already operating on the internal market through the EEA Agreement".

In this respect, Commissioner stressed that Iceland was in a unique position, being both a candidate country (although not any longer) and an EEA member, promising to keep Iceland closely involved in developments in negotiations with the US.

As to Switzerland, another EFTA member but not a member of the EEA, the Swiss government has been there before, having in 2006 decided not to enter into negotiations with the US mainly because of the difficulty in liberalising agriculture and the limited benefits in other areas.

Acknowledging that there is "discrimination potential" for Switzerland in the TTIP, the Swiss government now concedes that it needs to assess the economic price of keeping a highly-protected agriculture with the political internal price of a liberalisation. Given that it could reduce its own barriers to US goods, it regards the negotiation of a free trade area with the US leading toward the opening of agriculture to the EU, which would lead to it joining the TTIP.
In other words, it is being readily conceded that being outside the EU is no bar to the EFTA countries joining TTIP, or benefiting from its provisions. And the entry price will be the same for all countries, in or out of the EU - the same traumatic "liberalisation" that most EU member states are having to undergo.

These issues, even the Economist admits, are likely to cause problems. Lobbies are as powerful as ever, it observes: farmers will block anything.
As problematic, a battle over subsidies to two aircraft manufacturers, Boeing and Airbus, could yet erupt into outright trade war. And in such tough times, how could an Ohio congressman give up the "Buy American" rules in government procurement, or a French MEP abandon protection for geographically unique brands, like champagne or Roquefort?

These issues, and others, it is asserted are likely to make the TTIP "porous and shallow", reducing the overall benefits of the deal yet also making it easier for EFTA countries to join.

Inasmuch as TTIP is a regulatory partnership, looking to enhancing cooperation for the development of rules and principles on global issues of common concern, and there is already complete convergence between EEA countries on these issues – which can only continue as TTIP agreements are fed into EU law - it then becomes inconceivable that EFTA/EEA countries could be excluded. As long as they are part of the Single Market, to do so would be trade discrimination, about which WTO might have a view.

And there is the effective battlefield. It is not, as the Express has asserted, that we could forge better deals outside the EU. The point is that being outside the EU does not exclude us from participation in deals such as TTIP or, for that matter, the EU's Single Market.

In fact, there is a broader agenda here. TTIP is widely regarded as a mechanism for by-passing the stalled WTO Doha Round talks. Far from additional countries being regarded as tiresome and difficult add-ons, broadening of participation will be actively sought.

Already, there is talk of adding Canada, Mexico, Switzerland, and Norway, which would add nine percent to the global trade coverage. South Korea would be a natural and strategically important participant, since it already has free trade areas with the EU and the United States and negotiations under way with China.

Thus, on this side of the Atlantic, for Mr Cameron to claim that TTIP benefits (such as they are, and such as will materialise) are dependent on membership of the EU, and belong exclusively to EU members, is absurd. Free trade is for the benefit of all - not a political plaything.