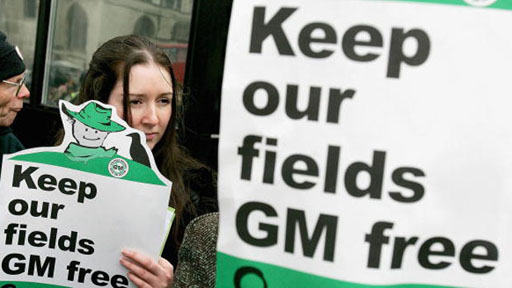 One recalls the hilarious sixth episode of Yes Minister where Sir Humphrey was offering advice to the hapless Bernard on how to guide ministers to making the "right" decisions.

Not quite in "courageous" league was this week's speech by Owen Paterson on the benefits of genetically-modified foods. Such issues do not decide general elections. It can be said, though, that the decision certainly was "controversial".

Whether this is in the Sir Humphrey sense remains to be seen, but it has polarised opinion, coverage ranging from the laudatory Spectator and the gushing Tory Diary to the downright hostile Daily Mail and the predictably sniffy Guardian.

What none of the commentators seem to have picked up in the Paterson speech, though, is his critical analysis of what amounts to a complete regulatory failure on the part of the European Union.

If one wants British researchers and farmers to be able to develop the latest technologies so that they can reap the economic and environmental benefits, and Mr Paterson does, then they are not permitted to do so by the EU. Put to him in a later interview in Conservative Home that he is "reduced to the position of a lobbyist", Paterson admits that "this has been a European competence".

The European Commission is well aware of its own failures, having recently commissioned a detailed report on GM legislation, which retails that:

Although there may be a general consensus that the legislation's core objectives are still relevant, it is harder to argue that they are being met in the way that was originally envisaged. The regulatory framework is not functioning as had been anticipated and certain objectives are being met "by default" rather than through due process. For example, the environment and human health are being protected from potential adverse risks of GMO cultivation not by the screening out of "unsafe" products, but instead by the absence of decisions one way or another on cultivation applications.

Nevertheless, the essential problem is one of the Commission's own making. Before a GM crop can be planted in the territory of any member state, it must complete the "market authorisation" procedure, which is processed centrally by the Commission after a risk assessment by the European Food Safety Authority.

Lacking the flexibility of these additional provisions, the Commission is locked into its centralised system of GM authorisation. This requires the approval of a regulatory committee staffed by member states officials, and – in the event of non-agreement – the qualified majority of the Council of Ministers. It is this system which has created the logjam. Only one GM crop has been approved for cultivation in the last 14 years.

The lack of progress has led to proposals, as long ago as 2009, for explicit inclusion of socio-economic factors in the decision-making process or providing member states with the right to declare areas within which approved GM crops could not be cultivated (a choice that might, presumably, be based in part on ethical considerations).

Despite the need to resolve this issue, there has been no movement on either of these proposals, and GM developers are now abandoning the European ship and taking their business elsewhere. Paterson wants to see this change. He asserts that "we must find a way to allow fair market access for products which have undergone a rigorous case-by-case safety assessment".

Under the current regime, a British Secretary of State has to work with various allies, get alliances, but even that is not working. With GM, we have an issue where there are very strong feelings in some member states. Paterson recalls a recent poll from Germany where 98 percent of people were opposed to GM crops. "You have to really respect that", he says.
But that does not take us any further forward. As long as we are in the European Union, British ministers do not make decisions on such issues. It matters not whether you like their decisions or not - they are simply not allowed to make them.