Norway: "We do not need Brussels to tell us what to do" 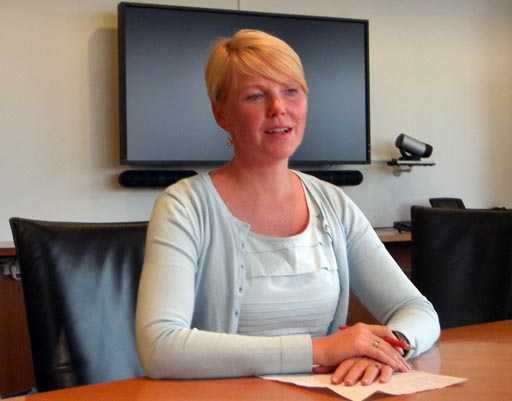 Anne Tvinnereim (above) is an unusual politician by any standards. Now state secretary for the Ministry of Local Government and Regional Development, at the age of 15 she was catapulted into politics to fight the "no" campaign on European Union membership. One way or another, she has been in politics ever since.
Her portal into the fray was Norway's Centre Party – a political grouping that could roughly be equated with Britain's Lib-Dems, except that the comparison doesn't even begin to do it justice.

From its agrarian base in 1920, as a Farmers' Party, it has transformed itself into a true champion of localism, committed to the decentralisation of the state. Having broken free of its founding ideology, since 2009 it has shared power with the Labour Party, in a Red-Green coalition.

From the very first, in 1972, the Centre Party has been opposed to membership of the European Union. And to fight the 1994 referendum, the entire "no" campaign was led by Anne Enger Lahnstein, then leader of the Centre Party.

Following the referendum, young Anne Tvinnereim joined the Party's Youth Organisation's Political Committee and has since climbed through the ranks. She became a member of the Party's Central Executive Committee in 2000 and leader of its youth organisation, also becoming a Council member of "No to the EU" in 2001.

The year 2003 saw Anne as deputy member of the Party's Central Executive Committee and in 206, she was appointed as political adviser to the Norwegian Ministry of Transport and Communications, becoming state secretary in 2011. With a general election due in September, she is looking forward to the fight against a resurgent Conservative Party.

We met in the penthouse conference room of the stylish offices of the Ministry of Local Government, overlooking the very spot where Anders Breivik had detonated his bomb, almost exactly two years ago (below). This provoked a moment of sombre reflection. That he was one of us, a Norwegian, shocked us all, said Anne, in a pause for reflection.

Down to business, a confident Anne, radiating warmth and friendliness, instructed us that she was a politician, speaking strictly for her Centre Party. She could not give us a professorial dissertation on the state of Norway and nor could she speak on behalf of the Norwegian government – her answers would be "partial". And indeed they were, direct, to the point, reflecting her strongly-held political values.

Our interest was the intervention of Norwegian politicians in the British debate EU membership debate, and especially the comments of Espen Barth Eide, Norway's current foreign minister in the coalition government, of which Anne Tvinnereim is a member. 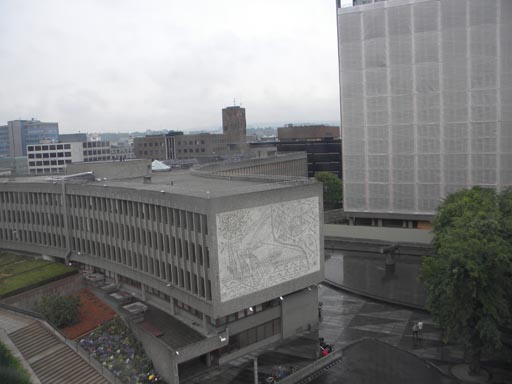 Back in December last, Eide (pronounced eider, as in the duck) had told the BBC that UK should assess the advantages of staying in the European Union, rather than consider leaving. Oslo, said Eide, had "limited scope for influence", telling BBC Radio 4's The World This Weekend that, "We are not at the table when decisions are made".

"We are a coalition government", Anne explained. Eide could say such things in his capacity as a party politician, but that did not mean the Centre Party agreed with this position. It did not. His comments and the many like them from EU supporters, had caused much debate in Norway. His was not the majority position of the people.

Anne hotly disputed the claim that Norway had no influence over EU law. "It is true that we are not there when they vote", she said, "but we do get to influence the position". Explaining the simple facts of international relations, she told us, "Most of the politics is done long before it [a new law] gets to the voting stage". The Norwegian government, Anne said, tries to influence legislation at an early stage, so we "totally disagree" with Eide's position. "He does not represent the Norwegian debate".

Asked why Eide should make such statements, Anne explained at length, clarifying an often confusing position. People like Eide, who support the EU, she said, haven't given up. There may be no chance of Norway joining in the near future, but they are looking ahead, perhaps to twenty years, when they hope that the situation will change.

Not only do they want the EU to succeed, they need the UK to continue with its membership of the EU. If the UK did leave, it would weaken the Norwegian europhile position and vastly strengthen the "no" campaign, especially if Britain joined EFTA. They are protecting their own position.

"Would Norway want Britain in EFTA?", I asked.  "After all, Norway is the biggest, most powerful current member of this trading bloc. Wouldn't it lose out if a much bigger, more powerful UK joined?"

"Of course not", Anne exclaimed, looking at me as if I had uttered something about the Pope not being a Catholic.  "It would be in the Norwegian interest to have Britain in EFTA". If one could speak in capitals, she just did.

Britain would be very welcome on EFTA. In fact, if Britain left the EU and joined EFTA, "that would be fantastic".

The point was that Norway had joined the EEA, in order to be part of the Single Market. This had brought many economic advantages. But there were disadvantages – no one disputed that. And there were concerns about democracy and the "democratic deficit" in the relationship with the EU.

But Anne and her colleagues did not regard the current EFTA/EEA agreement as the end state. With Britain alongside, she said, we would be that much more powerful, and would be able to negotiate a better deal.

She was very conscious that Norway already had a veto and was able to block EU law, the so called "right to reservation", but she wanted to go further. She would like to see the EEA agreement changed, so that EU proposals no not automatically become law.

Would she like a situation where the whole EEA, including EFTA members, decided on what became law, I asked. "Yes", she said, but it would need Britain to help get such a change. We need Britain in EFTA.

As to joining the EU, this is not even a question worth entertaining. Anne Tvinnereim, Minister and a politician who is going places, would not hear of it. She was very, very conscious of Norway's heft on the international stage.

She had had dealings with foreign affairs as Senior Executive Officer in the WTO Section at the Norwegian Ministry of Foreign Affairs for a year in 2005-6 and became First Secretary at the Royal Norwegian Embassy in Maputo, from 2007 to 2011. Norway's weight at the United Nations, we would not want to give up she says.
Already, they find that Sweden, which as a member of the EU has to vote with the common position, informally asks Norway to represent a different position because it no longer has a voice. And to lose our independent voice over the Arctic, she says, would be a disaster.

And there was the "d" word. Our politicians tell us that leaving the EU and becoming like Norway would be a "disaster". Anne Tvinnereim thinks not. For her, joining the EU would be a disaster. Britain leaving, and joining in EFTA would be "fantastic".

This, we like to feel, is the authentic voice of Norway. Young, fresh, vibrant and forward-looking, this is a country that knows what it is and where it wants to be. Outside the EU, it is looking for equal partners.

"We do not need Brussels to tell us what to do", says Anne. And how could we disagree?