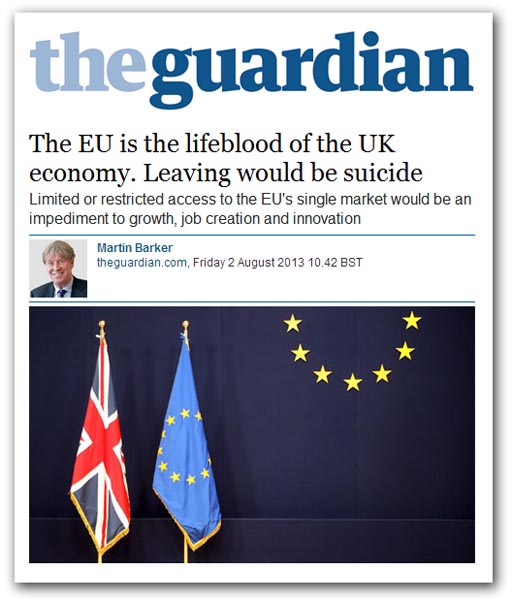 Having spent a week discussing real politics, and exploring the leading edge of issues relating to the EU, one comes back to earth with a leaden thump, to find that the debate in the UK has barely moved. It is still relying on the unchanging myth that participation in the Single Market is dependent on membership of the European Union.

Thus do we get in the low-circulation Guardian today the tedious, ill-informed lament that leaving the EU's would be "suicide" as this would limit or restrict our access to the this mystical Single Market, which has assumed epic proportions.

The thoroughly dishonest claim is based on propaganda from the British Chambers of Commerce (BCC), fronted by Martin Baker, owner of Rowan Precision Ltd, in the heart of the industrial West Midlands. He has been manufacturing precision turned parts for over 25 years, for sectors including aerospace, medical, defence, lighting, automotive, scientific instrumentation, electronics and telecommunications.

Strangely, from one who is preaching such woe, only fifteen percent of his products go to EU customers. Nevertheless, Baker argues that expansion of the EU single market has "opened up a lot more doors for us, providing us with many more opportunities to export". Without the single market, he says, "my company simply wouldn't have the same work turnover as we presently do".

Even if one conceded Baker's point in its entirety, though, it would seem that we must accept the entire corpus of European political integration, and all that that entails, just so that his firm can enjoy a fifteen-percent enhancement on its turnover. And one does not have to be hard line to assert the obvious: that is far too high a price to pay.

That there are problems with EEA membership, and that this is by no means the perfect solution to our trading relationships with EU member states is a given. And that is where the debater lies, in how we can develop a firm, stable relationship without having to buy into the integration agenda.

But that is very much a different debate to that on offer from the likes of the Guardian, the British government and europhiles in general. They would have the debate confined to the simplistic question of "in-out", with no discussion of alternatives or suggestion that there might be different was of achieving Mr Barker's objectives.

And the point here is that, if the trading arrangements that Mr Baker needs can be protected, then he and his kind have no locus in the greater debate. Business, as we have said before, has no business, in telling us how we should be governed.

What emerges from all this, though, is that if the europhiles played is straight, and had a fair debate, they would lose it. You would get a situation like Norway, where over 70 percent of the voters rejected the idea of membership, so much so that the issue was not even on the political agenda.

Thus, what we are seeing is the core tactic of the europhiles. They are attempting to shape and control the debate, excluding the wider issues from the discussion because they demolish their case.

And once again, we see the almost total reliance on FUD. Never mind that, with the opportunity to renegotiate a new trading arrangement alongside Norway and the rest of EFTA, which would be a far better deal than we have at present. Our minds much be focused on leaving the EU, in the most negative of terms.

Take the fear away and the very tenor of the debate changes. And that is why the europhiles love their FUD. It is the only thing that can work for them - they have nothing else on offer.