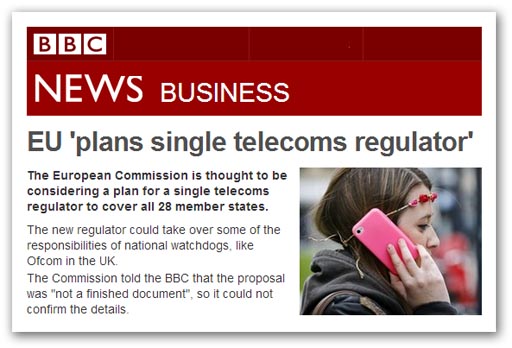 First you take an industrial sector and weaken the national system of control. Then you impose a clumsy and inadequate system of regulation and watch it fail. Then, to "improve" the system, you offer an EU-wide regime with its own regulator to impose standardised controls over the entire industry.

By this means, you have engineered another leap forward in integration, the slow, salami-slicing approach pioneered by Jean Monnet which he called engrenage.

And here we see it in action with the telecoms industry, where the European Commission is now in the final stages of a plan to install a single telecoms regulator to cover the industries all 28 member states.

The new regulator will take over some of the responsibilities of national watchdogs, like Ofcom in the UK, the aim being to remove "national divergences" by moving away from the status quo of 28 national regulators.

This is being dressed up by Neelie Kroes, the EU telecoms commissioner, as a means of creating a single market in telecoms products, permitting different national telecoms companies to get access to all 28 member states, with a right to sell services to customers outside their own national areas of operation.

British telephone users, domiciled in the UK, could thereby have contracts with Belgium Telecom, while Dutch users could have their contracts with Deutsche Telekom - arrangements prohibited under the current regimes.

But that would mean that service providers would come under the control of different regulators simultaneously, in their country of origin and in the additional countries where they would also be allowed to sell services. European telecoms regulation would thus be reduced to a state of total confusion., says the Financial Times.

It would call for 28 national authorities to play umpire on each other's turf, representing not only a regulatory farrago but a travesty of accountability, especially if authorities' closest sympathies lay with operators who speak their own language. It would worsen the erratic regulation that is already the industry’s chief gripe.

Thus, the idea of a single telecoms regulator for the EU becomes a "logical step", and the idea of national control over a major industry sector withers on the vine, especially as the Commission is canny enough to force through price cuts which will make the deal attractive to consumers.

A system which started in the 1950s with the coal and steel industries thus spreads it net wider, to encompass yet another economic enterprise. This brings the EU one step closer to the day when it has effective control over the entire economic activity throughout the whole of the EU, from which political control stems.

Monnet was clever enough to realise that this slow-motion process would eventually pave the way to political integration and, although there is likely to be resistance at first, especially with mobile telephones where national governments have reaped huge windfalls from the allocation of radio spectrums.

There is also the minor problem that subsidies paid by city dwellers to provide rural services will be decided by fiat rather than elected governments, nominally accountable to their voters.

The "logic" of a single regulator, however, will be so powerful that progression towards one will be irresistible, even if it doesn't happen all at once, and we end up with a transitional stage with powers shared between national regulators and the European body.

And, for as long as we are in the European Union, so will our power drain away.