Germany: for you, the holiday is over 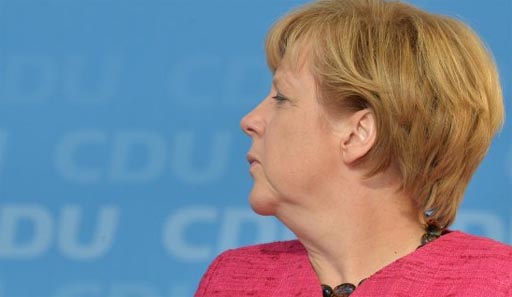 That's the blunt message conveyed by Spiegel as it marks the start of Merkel's general election campaign, with the poll set for 22 September, a mere six week's time.

As it stands, the money is on Merkel's CDU-led "yellow-black" coalition winning, although even Merkel herself concedes that the voting will be tight. In the 2009 election, the CDU/CSU grouping took 33.8 percent, while coalition partner FDP polled 14.6 percent. Currently, the CDU/CSU is polling 40 percent (Emnid, 4 August) but the FDP is down to a mere five percent.

At the launch yesterday at Seligenstadt, just outside Frankfurt, young Socialists heckled Merkel, shouting "hypocrite", "Merkel out" and "liar". In response, Merkel observed, mockingly, "This is the future of the SPD".

Merkel is planning more than 50 major rallies between now and the election, so we are going to see a lot more of this. But, in the meantime, some British newspapers are making claims that Merkel is keen to support David Cameron on repatriating powers from the EU.

The Independent is making a big deal of this, although there are no direct quotes from Merkel or German officials.

Instead, the source seems to be Fresh Start Tory MPs citing private discussions with "close colleagues of the German Chancellor". That would make the information extremely unreliable, prone as the Tories are to serial delusion.

The Telegraph joins the gang as will, with the obligatory "comfort quote" from Open Europe, which makes its story no more reliable – any more so than the wiffle from The Times.

However, there is also an AFP report in circulation, published in a variety of German media, including Die Welt. It tells of Merkel stating on German radio that there should be a discussion about a return of powers from Brussels to nation states – after the election.

That was on Tuesday, when she was asked whether the EU should get more powers. She conceded that it should, but she also referred to a debate in the Netherlands, saying: "We can also consider: Do we give something back?"

This was in the context of Merkel stressing that her goal of "more Europe" cannot be achieved only by strengthening the institutions in Brussels at the expense of nation states. There was a need, she thought, for better coordination among member states.

We might expect some vague rhetoric on the EU from Merkel, to counter any threat from the AFD, although Der Spiegel suggests that this new eurosceptic party is unlikely to make it into the Bundestag.

Certainly, what Merkel has just said does not at all sound as if she is preparing a winding up order for the EU. The nub is, though, that we are going to get no bankable intelligence on the EU from German sources until the election is over and the new coalition – whatever its colours – settles down to work.

Then, we have already been warned to expect in the early spring of next year, proposals for a new treaty from the Commission, and this most certainly will have been run past the German chancellor. Tory hopes of a big breakthrough will, I would have thought, be extremely slender.