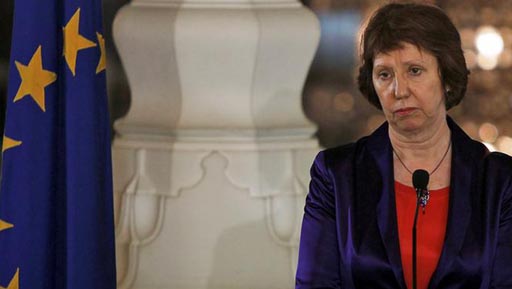 The European Union should review aid programmes to Egypt and the International Monetary Fund should hold off from supporting Cairo after a crackdown on supporters of the ousted Islamist president, Sweden's foreign minister said yesterday.

Carl Bildt told Reuters in an interview that Europe had very limited influence on Egypt's dominant military, although the United States had stronger links, and economic sanctions were not the right response to the bloodshed.

Bildt forecast a period of severe repression, with hardliners in command in Cairo, but said the Europeans should keep talking to all sides so as to be ready, if the opportunity arose, to play a role in achieving a solution.

And that is the current offering. But what is not being said is quite how much we the hard-pressed taxpayers of the EU Member States, have been giving in aid to Egypt via the EU. It takes a recent report from the European Court of Auditors to tell us that. And between 2007-2013 it amounted to approximately €1 billion - a free gift from the poor of Europe to the limousine passengers of Egypt.

Somewhere, no doubt, there are long-winded tracts written in justification of this transfer of wealth, although the effect has not met any promise that might have been made. As recently as June, the Court of Auditors were saying that the support was "well-intentioned but ineffective".

In particular, Baroness Ashton's European External Action Service (EEAS) had failed to ensure that the Egyptian authorities tackled major weaknesses in public finance management. There had been a lack of budgetary transparency, an ineffective audit function and endemic corruption.

Yet, despite this,  the Commission and the EEAS did not react. They did not react  to what the Court of Auditors blandly calls "the lack of progress".  They did not take "decisive action" to ensure accountability for considerable EU funds.
Instead, they seem to have taken no action at all - not even the overpaid Baroness Ashton. Our money continued to be poured into the coffers of the Egyptian Authorities. The lack of budgetary transparency continued. An ineffective audit function continued,. Endemic corruption continued.

Only now, two months later and after the killing of hundreds and possibly thousands of civilians, do we have Carl Bildt telling us: "We will have to look at the different EU programmes to see which ones are appropriate and which ones are not in the present situation".

Predictably, Bildt rejects criticism that the EU has failed to do enough to support the Arab Spring uprisings. "We went flat out, particularly with Egypt ... I think we did everything we could have done. And it was obvious from the beginning how difficult it was, there were deeply entrenched divisions within the Egyptian society", he says.

The thing is, though, we have been looking at serious amounts of money and this is being paid to buy influence, part of the EU exercise its famous "soft power" which was supposed to enable it to shape events in the Middle East.

Yet, even in 2011, a commentator was writing that the EU had "no role in the ebb and flow of Egypt's process of political change". The shifting alliances and tactics of different actors in Egypt, he said, "are unfolding quite beyond the orbit of EU influence".

Now, nearly two years later, all Bildt can say is that: "Everyone underestimated the problems and the dangers inherent in what was unleashed two and a half years ago".

So, what were we supposed to be getting for our money? Can somebody please tell us that the "well-intentioned but ineffective" expenditure of approximately €1 billion has given us more than hundreds of dead, a country on the brink and events which "are unfolding quite beyond the orbit of EU influence"?

Is there anything Ashton and her EEAS has done that was actually worth even a fraction of the money spent? All we actually seem to be getting is the EU reduced to a mere spectator, with Ashton wailing that she fears the worst.  For us, though, the worst has already happened. They stole our money and gave it to to a bunch of thieves.