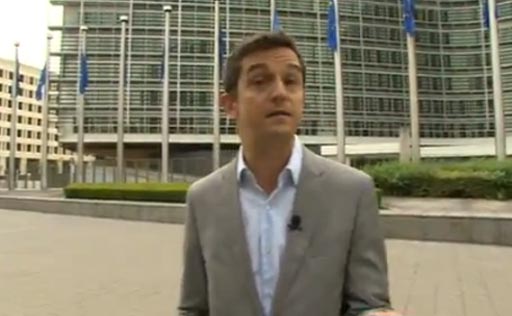 Out of the blue - and for no apparent reason - BBC Europe correspondent Matthew Price (pictured) offers a video guide to EU law and the budget, to inform us plebs who don't know anything about the EU and want to be patronised.

Thus does the all-knowing and do doubt well paid Mr Price tell us that, in most policy areas there is "co-decision" by the Council of Ministers (representing EU governments) and the European Parliament.

This is the system of law-making where a proposal is tabled by the European Commission which then has to be approved by both the Parliament and the Council. Except that there is one minor problem. The "co-decision" procedure as described by Mr Price no longer exists.

This may look to be a small point, but it isn't. The "ordinary legislative procedure" is one of the most important and commonly-used legislative tool in the European Union system of law-making and the BBC, in a guide funded by its increasingly reluctant license payers, gets the name wrong. Mr Price hasn't caught up with the Lisbon Treaty.

One might as a result ask what else Mr Price has got wrong, and there is plenty. For instance, he gets the procedural sequence wrong. Price suggests that a law is sent to the European Parliament first, where it is [or may be] amended, and thence it goes to the Council for them to have a turn, then back to the Parliament and so on.

Basically, Price is offering a pastiche of the British system, and the exchange between the Commons and the Lords, which is not how the European Union system works.
In fact, the Commission proposal goes simultaneously to Council and Parliament. Each, in their different ways, they prepare their "common positions" which are then compared. Adjustments are made, but not in the way that Price describes. Then, if there is no agreement, there is trialogue procedure, where the two sides hammer out their differences.

Price has it that the Commission steps in and negotiates a compromise agreement. This is wrong. The Commission host the trialogue, but does not take part in the discussions. It has to be involved because it can effectively veto any agreement, so the parties keep each other informed.  But the agreement is between Council and Parliament.

To get it so wrong is to make really fundamental errors. Price quite obviously has only a slender grasp of the EU law-making system. And he does not stop there, adding errors of omission to his catalogue.

"Often EU laws arise because national governments and MEPs tell the Commission that there is a need for them", Price says on his web page. "Public consultations, scientific research and impact assessments also feed into the legislation".

In fact, by far the largest initiators of "proposals" for EU law are international standards-making bodies, our old friends UNECE, Codex and the like.  Maybe it would have been complicated to have said this ñ and maybe not. We managed to do it in one short sentence. But Price doesn't even try.

So there we have the state broadcaster presuming to inform us on aspects of how we are governed, and getting it wrong in important respects.  Not least of the failures is the inability to arm the reader (or viewer) with the all-important vocabulary, such as "common position", with which it is so hard to follow proceedings in real life.

With the BBC having got the very basics wrong, one now wonders what else it has got wrong ñ and will get wrong. And there we don't have to speculate a great deal. Whether it is calling a European Council a "summit" or failing to understand and report on the significance of Article 50 in the Lisbon Treaty (TEU), the BBC is a very poor and unreliable guide.

Sadly, though, the broadcaster has prestige. Many people believe its flawed output. Many others, though are beginning to realise how shoddy it has become. The BBC is not just biased. It is also worryingly incompetent - and not just in its broadcasting. Its revenue collection is also shambolic.

Thus, while it still demands its money, it is entirely unsurprising that people are increasingly reluctant to pay.