UK politics: ostracism is not enough 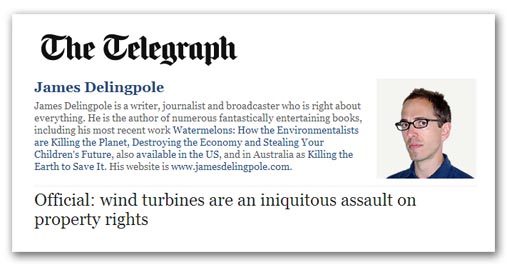 "Since it is becoming increasingly clear that the pusillanimous Cameron is quite unprepared to protect rural Britain against the depradations [sic] of wind farm zealots like Davey and Tim Yeo and Dale Vince, it may be that communities will have to take matters into their own hand[s]", writes Dellers.

He then goes on to write: "I'm not arguing for direct action: I don't believe in violence or threats of violence, either to person or to property. But I do very much believe in the power of ostracism ľ one of the most effective ways a society can regulate itself according to common values without the need for government meddling".

Thus, the Dellers nostrum is: "Anyone who puts a wind turbine on his land fully deserves to be ignored, isolated and loathed by his neighbours. These people have caused more than enough damage with their selfishness and greed: now it's payback time".

As a general tactic, this isn't such a bad idea. "Sending to Coventry" people who offend against societal norms is a time-honoured and respectable response, and it can have an effect in closed societies, where peer approval is an important part of the self-esteem of those who are ostracised.

In a fragmented society, however, where an individual can rely on mutual support from a number of different, unrelated groups ľ such as the virtual community on a forum or facebook page ľ ostracism can have considerably less effect.

The bigger problem we have with the Dellers nostrum, though, is his implicit association between direct action and violence, or threats of violence. Apart from taking note of some obvious historical events, specifically Gandhi's use non-violent protest as a campaigning tool, Dellers needs to be reading Gene Sharp and his series of books on "The Politics of Nonviolent Action". It would also be a good idea to read Carne Ross.

Basically, What Dellers is doing is speaking from a position of powerlessness, but also from the stance of someone unaware of his own power. The individual alone has little power (although Dellers, with his blog has some), but as a part of a mobilised collective, individuals can bring down governments.

Inescapably, though, the tool of revolution is direct action. It is best done non-violently ľ if not always legally. We have no problem in advocating civil disobedience. The one rule there is that you take responsibility for and accept the consequences of your actions.

And it is here that we are using The Harrogate Agenda as our framework. In our government, as structured, decisions as to whether to allow the erection of wind turbines would be made locally, and be amenable to local referendums. If the people decided they did not want these cursed machines, they would have the power to refuse developers permission to erect them.