Syria: do they know what they are doing? 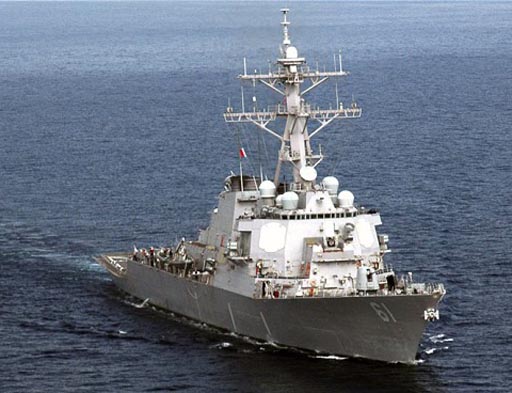 Little boys with big toys: the picture is of USS Ramage, an Arleigh Burke-class guided missile destroyer, one of four USN destroyers currently deployed in the Mediterranean. They can be equipped with 90 BGM-109 vertically-launched Tomahawk missiles, weapons that could potentially be used to strike Syria.

Alongside Britain, which has a Royal Navy Trafalgar class submarine ready to join forces with the US warships, the theory is that the missiles could be unleashed to destroy President Assad's command and control facilities, weapons delivery centres, intelligence bases and militia training camps. All this will be "punishment" for his alleged use of poison gas against his own people – something which he denies and has yet to be proved.

But launching the weapons is the easy bit. Dealing with the consequences may be less easy, and few people are prepared to predict quite what they will be – how Russia will react, how Iran will react, or even how Syria itself will react. But then, it is always easier starting wars than finishing them.

As far as the UK goes, though, I have not yet talked to anyone who thinks that David Cameron is right to get so directly involved. There is to be a debate in Parliament on Thursday, but the vote is not binding, even if Mr Cameron "is clear that the Government will respect Parliament's view".

But the government has no mandate from the people to go to war. In fact, as a coalition government that did not exist before the election and for which no one could therefore have voted, it does not have a mandate for anything. But going to war is different and special, and of great consequence if it creates an uncontrollable situation which ends up in people dying.

Thus, whatever decision is made, even if Parliament gives its assent, this will not be a democratic decision in any proper sense of the word. The people have not been consulted, they have had no part in the decision and they are not represented by the government in office.

One recalls that in July 1940, professor A Berriedale Keith (a well-known constitutional lawyer of his time), wrote of the utility of opinion polls (then very novel), telling us that, of MPs: "... we have long outlived the idea that at an electoral contest we confer unlimited authority on the member we elect".

"It is the business of an MP to keep in touch with public opinion, and not humbly to obey the bidding of the whips", he went on to say, then advocating official opinion polls to ascertain the views of the people, which should then guide government action.

Such an option would go some way towards conferring legitimacy on the any decision to attack Syria, but better still would be a binding referendum. With modern technology, it would be relatively easy to devise a system whereby electronic votes could be cast, at relatively low cost, to gain formal assent from the people and legitimise any action. Under the Harrogate Agenda regime, if enough people called for a referendum, it would be compulsory, and the result binding.

There is, however, no appetite for such a system, not least because there would be a chance that the people would say "no". So, effectively, the people are not to be asked because they might deliver the wrong answers. And people complain that the EU is undemocratic?

Underwriting the whole system is the arrogant assumption that our elected representatives are somehow wiser, more knowing or better qualified to make decisions on our behalf. But looking at the arguments put up by William Hague, it would be very hard to concede that point.

There are, for instance, questions that should be asked – as posed by Your Freedom and Ours - which have not been addressed, much less answered.

Thus, to use that hackneyed phrase, if this government goes to war, with or without the approval of parliament, it will be "not in my name". The last thing we or the United States or NATO needs is another open-ended, ill-defined military engagement in a country whose politics is barely understood in the West, says Helen Szamuely, to which we might add, "so say we all".