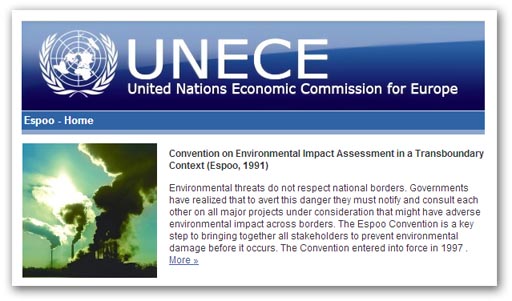 NGO encroachment has been something of a theme on this blog, and especially the way environmental NGOs have wormed their way into the heart of government, exerting a stranglehold on environmental and related energy policy ñ now of special relevance with fracking taking such a high profile.

Not least of the problems, though, is in defining what we mean by "government", in the context where the media and much of the commentariat still think in terms of the UK government and of Whitehall and Westminster.

With so much of the focus on the street theatre of Balcome, it is difficult enough getting people to recognise the elephant in the room, the European Union, where much of the action is happening - despite environmental policy having become part of the treaty acquis with the Single Market Act in 1986 ñ one of Margaret Thatcher's great "achievements".

But, as we saw yesterday, with the news on the Aarhus Convention, international environmental activism in Europe does not stop with the EU. Another major player is the United Nations Economic Commission Europe. Cast as a United Nations Agency, it is of course ñ as the title implies ñ a regional treaty body, covering the wider Europe, with its headquarters in Geneva.

Together with the EU, these form an international nexus, a policy and legislative powerhouse which is determining the agenda on environmental matters ñ which includes energy ñ long before anything gets near the British government or Westminster, with MPs and even ministers at the end of a long queue.

Amongst the least visible of all these bodies ñ in a network characterised by its obscurity ñ UNECE must at least be a contender for the first prize in the obscurity stakes ñ albeit against stiff competition.
Yet, as we are beginning to realise, this is one of the most influential of all the bodies on environmental issues, although it is best seen as part of a nexus working closely with the European Union. The EU contributes to the UNECE budget (along with member states, including the UK) and Commission officials serve on the working groups.

And it is these two, working together, that are going to be the death of shale gas and oil (collectively part of a group known as Unconventional Fossil Fuels - or UFF) exploitation, in a process which has been going on for years, without anyone except a few dedicated activists having the first idea of what is going on, the process itself so complex and obscure that it almost defies description.

The weapon of mass destruction, to be deployed in an attempt (probably successful) to finish off fracking, is the Environmental Impact Assessment, flagged up in the EEB memorandum to the Lithuanian presidency.

We then saw secretary general of the EEB, Jeremy Wates, address the Council in Vilnius, making a presentation on fracking to the members.

Clearly, this was part of a co-ordinated plan because the EEB is also crowing about a vote in the European Parliament's Environment Committee to strengthen proposed changes to the EU Directive on Environmental Impact Assessments. Environmental NGOs, we were told:

Ö welcomed the outcome of this vote which would broaden the scope of the directive, close some of the loopholes that allowed developers to avoid an EIA, foresee the monitoring of the projects during all the project phases including post-closure phases, require the assessment of relevant alternative projects and include provisions for better information and a meaningful participation of the public.

But particularly welcome is an amendment that explicitly includes "the use of interim measures to ensure the project does not start before the review process is completed". With shale-gas exploitation also included in Annex I of the Directive "regardless of the amount extracted", this makes an EIA obligatory for projects of any size.

The reference flags up the fact that there is an amending directive going through the system, and we find it here, as COM(2012) 628 final, with the Committee report here, listing the amendments. But, from the limited Council documents, it is clear that this text is already controversial, and the proposal looks to be getting a rough ride. Therefore, Wates needed to address the Council in an attempt to smooth the passage of this directive.

But, the amending directive does not stand on its own. It gathers support from an own initiative report of September 2012, "on the environmental impacts of shale gas and shale oil extraction activities", which in turn calls in aid the Aarhus Convention, pointing out areas where conformity is required.

With the rapporteur, Bogus?aw Sonik, this is an example of what has been described here as the "Aarhus process", which now acts as a driver for many of the environmental initiatives in Europe. Its presence is also evident in COM 628 (final) with references to the directives implementing the Aarhus Convention, a child of UNECE.

But this is by no means the full extent of the UNECE's reach, as it is sponsor of another convention, this one the ESPOO Convention of 1991, with the full title of Convention on Environmental Impact Assessment in a Transboundary Context. Entering into force in 1997, it is now driving EU legislation to such a great extent that an EU official has been appointed as a vice-chair on the convention committee.

Crucially, though, one also sees in the meeting attendance a line-up of NGOs, including Friends of the Earth Europe.

But also present is the European ECO Forum, which turns out to be a key player in this long-running saga. Here we see it described as an ad hoc Coalition of environmental citizens' organisations (ECOs) and other NGOs acting in the UNECE region and primarily focusing on the "Environment for Europe" (EfE) Ministerial process.

The "Environment for Europe" process and its Ministerial Conferences, we are told, "provide a high-level platform for stakeholders to discuss, decide and join efforts in addressing environmental priorities across the 56 countries of the UNECE region, and is a regional pillar of sustainable development".

The point here is that the NGOs are on an equal footing with the member country delegations, working on generating and implementing "quasi-legislation" which bypasses normal (or any) democratic processes.

But if you suggested, out of the blue, that the fate of shale gas exploitation depended on the nexus of a treaty organisation in Geneva, in the thrall of environmental activists, working in concert with Brussels which was using our money to pay the bills, there might be a certain difficulty in getting yourself believed.
These, though, are the working components of our government, and the ones that hold the power. Westminster doesn't even get a look in - and neither, of course, do we, the people who pay for it all.