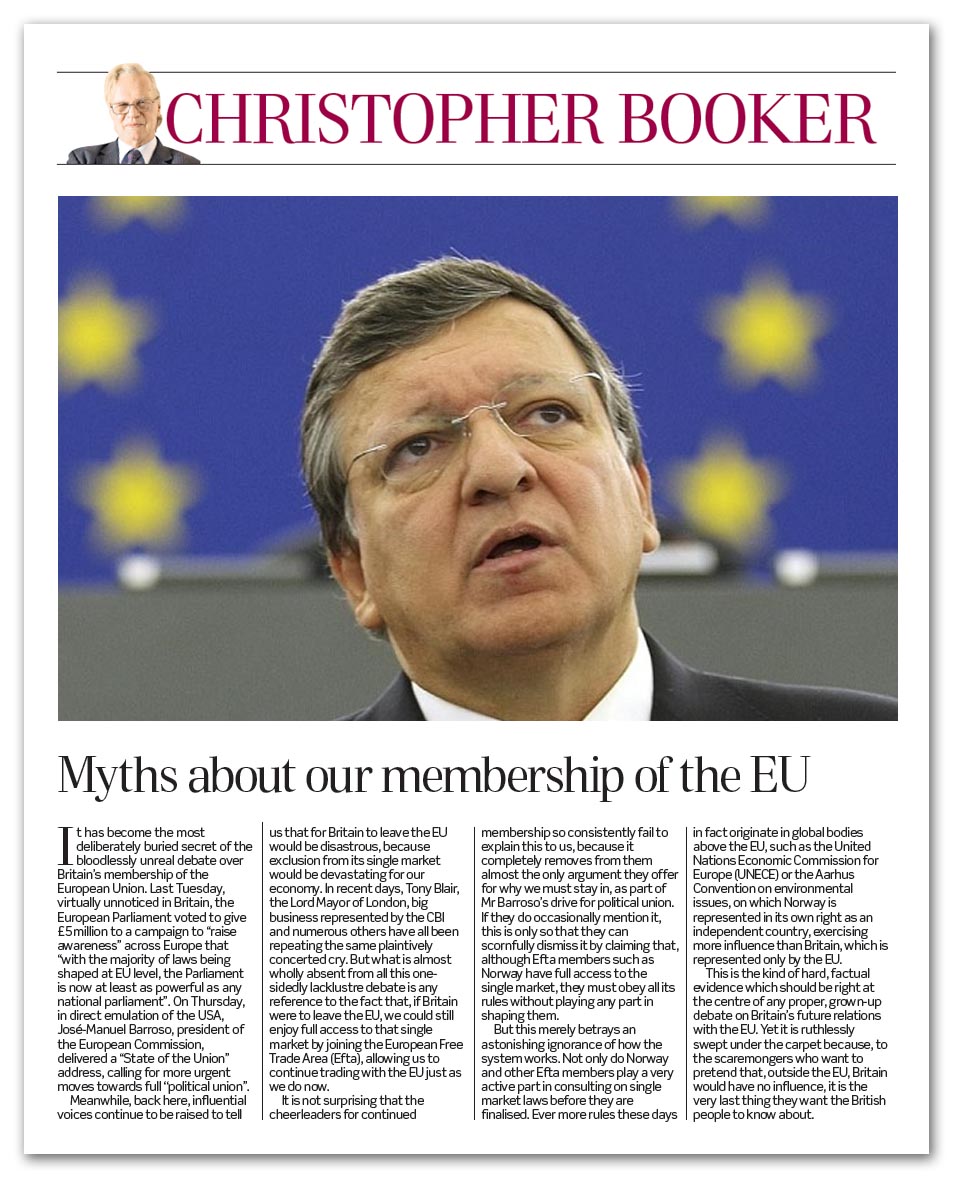 It was the Evening Standard debate which provided additional confirmation that the europhiles simply do not want to admit reality. Thus does Booker write that what amounts to the "third way" has become the most deliberately buried secret of the bloodlessly unreal debate over Britain's membership of the European Union.
Last Tuesday, virtually unnoticed in Britain, he writes, the European Parliament voted to give Ł5 million to a campaign to "raise awareness" across Europe that "with the majority of laws being shaped at EU level, the Parliament is now at least as powerful as any national parliament".

On Thursday, in direct emulation of the USA, José-Manuel Barroso, president of the European Commission, then delivered a "State of the Union" address, calling for more urgent moves towards full "political union".

Meanwhile, back here, influential voices continue to be raised to tell us that for Britain to leave the EU would be disastrous, because exclusion from its single market would be devastating for our economy.

In recent days, Tony Blair, the Lord Mayor of London, big business represented by the CBI and numerous others have all been repeating the same plaintively concerted cry. But what is almost wholly absent from all this one-sidedly lacklustre debate is any reference to the fact that, if Britain were to leave the EU, we could still enjoy full access to that single market by joining the European Free Trade Area (EFTA), allowing us to continue trading with the EU just as we do now.

It is not surprising that the cheerleaders for continued membership so consistently fail to explain this to us, because it completely removes from them almost the only argument they offer for why we must stay in, as part of Mr Barroso's drive for political union.

If they do occasionally mention it, this is only so that they can scornfully dismiss it by claiming that, although EFTA members such as Norway have full access to the single market, they must obey all its rules without playing any part in shaping them.

But this merely betrays an astonishing ignorance of how the system works. Not only do Norway and other EFTA members play a very active part in consulting on single market laws before they are finalised. Ever more rules these days in fact originate in global bodies above the EU, such as the United Nations Economic Commission for Europe (UNECE) or the Aarhus Convention on environmental issues, on which Norway is represented in its own right as an independent country, exercising more influence than Britain, which is represented only by the EU.

This is the kind of hard, factual evidence which should be right at the centre of any proper, grown-up debate on Britain's future relations with the EU. Yet it is ruthlessly swept under the carpet because, to the scaremongers who want to pretend that, outside the EU, Britain would have no influence, it is the very last thing they want the British people to know about.

Adding to Booker's piece one must conclude that it is not sufficient to discuss our continued membership of the EU in simple terms of "in" or "out". Properly to make the choice of which it should be, voters in a referendum must be aware of the consequences of each decision.

Drawing a parallel, imagine blindfolding someone and leading them to the end of a plank which, in the manner of a diving board, is suspended from one end only. You may then ask that person whether they should jump but, before they commit themselves, they will want to know the height of the fall, and what awaits them on the ground.

Clearly, even if a person is motivated to jump, the willingness to do the deed will depend on whether the fall is a few inches or hundreds of feet. And even in the case of the former, the jump into a wilderness (even though survivable) will be less attractive than a short hop into paradise.