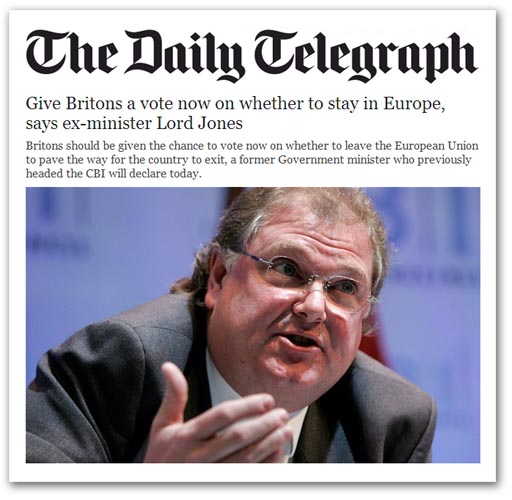 It has come to a pretty pass if all the legacy media can manage by way of attacks on UKIP and Nigel Farage is to revisit his schooldays.

By then, that is the legacy media for you. Besotted with personality politics and trivia, it has long since stopped been able to address issues, much less the complex issues attendant on our membership of the EU. So it resorts to ad hominem smears, dredging up a thirty-year-old letter by the man's school teacher, to provide evidence of his current political stance.

To the charge that Farage sung Hitler Youth songs as a teenager, even Nick Clegg gets it right. "I just think if we are going to start moving to a time where we start saying you said this when you were 12, therefore you are not fit now to occupy a public office I think that would probably be a pretty unhealthy development", he says.

For the record, having sat opposite Nigel Farage at the same desk on and off for four years, having shared tables (and wine) with him in the bars and restaurants of Strasbourg and Brussels, and poured his incapacitated body into a taxi when he was no longer able to crawl along the gutter, I can say fairly safely that Farage is not a racist – at least, not in the sense that the media is desperate to portray.

What Farage actually is defies easy description, and is thus beyond the powers of the average journalist to project. He is, in fact, not a white supremacist in any racial sense, so much as an old-fashioned English supremacist, very much along the lines of Churchill. Unlike his hero, though, Farage is by instinct anti-American, which is why he was against the Gulf War, the Afghan adventure and, currently, intervention in Syria.

Subtle though it may be, Farage does not consider other races (and nationalities) to be inferior, so much as believing the English (of which he considers himself a prime example) to be superior to everyone else. They have won the lottery of life by being born not with silver spoons in their mouths but with Union Jacks flying overhead.

In other words, Farage is an old-fashioned patriot, very much in the jingoistic sense. In part, that explains why his favourite historical period is the First World War, a period when Britain was still a Great Power and could still boast an empire. His knowledge of the war is thus encyclopaedic – but only of the British involvement. His understanding of the French campaigns is slender, to say the least.

You can understand, therefore, why the legacy media gets Farage (and his party) wrong. His old-fashioned, core values, harking back as they do to days of empire, are outside their frames of reference. They are looking at a throwback from another age, of which they have no experience and against which they have nothing to compare.

In a society where history has ceased to be valued, they cannot cope with a man who would have been more at home alongside red-clad soldiers in Victorian Isandlwana, than he is in modern-day Islington. No wonder the media doesn't "get" Nigel Farage. They are looking at the wrong century, twice removed.

On the other hand, were the legacy media capable of exploring real issues, it would note that UKIP has had a dreadful week. It started off by falling for the trap set by the Mail on Sunday, which failed to identify the source of legislation on "flower bulb registration". Thus, in his ignorance did Nigel Farage rail against the EU for laws that had in fact originated with the OECD.

The same week saw the party falling for the false story promulgated by the Express, which claimed that the EU was to ban the Union flag on retail meat packaging. The party website thus had Paul Nuttall, deputy leader, displaying his own profound ignorance by telling the world: "The EU is has (sic) launched this horrible offensive against national identity and scrapping appearances of the national flag is a way of doing that".

Once again UKIP had demonstrated its superficial grasp of trade and regulatory issues, illustrating its inability to construct a coherent case that will carry us through to fight a successful "out" referendum campaign.

That dire superficiality was seen again only yesterday, when the party resuscitated the Congdon fiction on costs of EU regulation, unable to understand that few savings will accrue from leaving the EU, as we simply pick up the same legislation at a global level. Thus we got Farage wittering about the "staggering" cost, implying that we would safe billions on regulatory costs if we left the EU.

Then, for the cream on the cake, we have the party conference where the keynote speaker has been invited to tell the throng that Britons should be given the chance to vote now on whether to leave the European Union – heedless of the fact that, if that if we had a referendum now, we would probably lose, not least because of UKIP's chronic lack of preparation.

On this, as with the other core policy issues, UKIP is embarrassingly weak and wide open to attack, fronting a political research capability which wouldn't even pass muster in the Daily Mail editorial office. But, as we see, the legacy media doesn't do policy issues. It can't even get its tat right, so it is unsurprising that it keeps getting UKIP and Nigel Farage wrong, while missing the main events.
The cheap shot is the only thing of which the fourth estate is capable - stuck as it is at the intellectual level of painting mustaches on posters (or pixellating screens). Its current attack on the Great Leader says more about the state of journalism than it does about Nigel Farage.