Booker: Miliband's duplicity on those bills 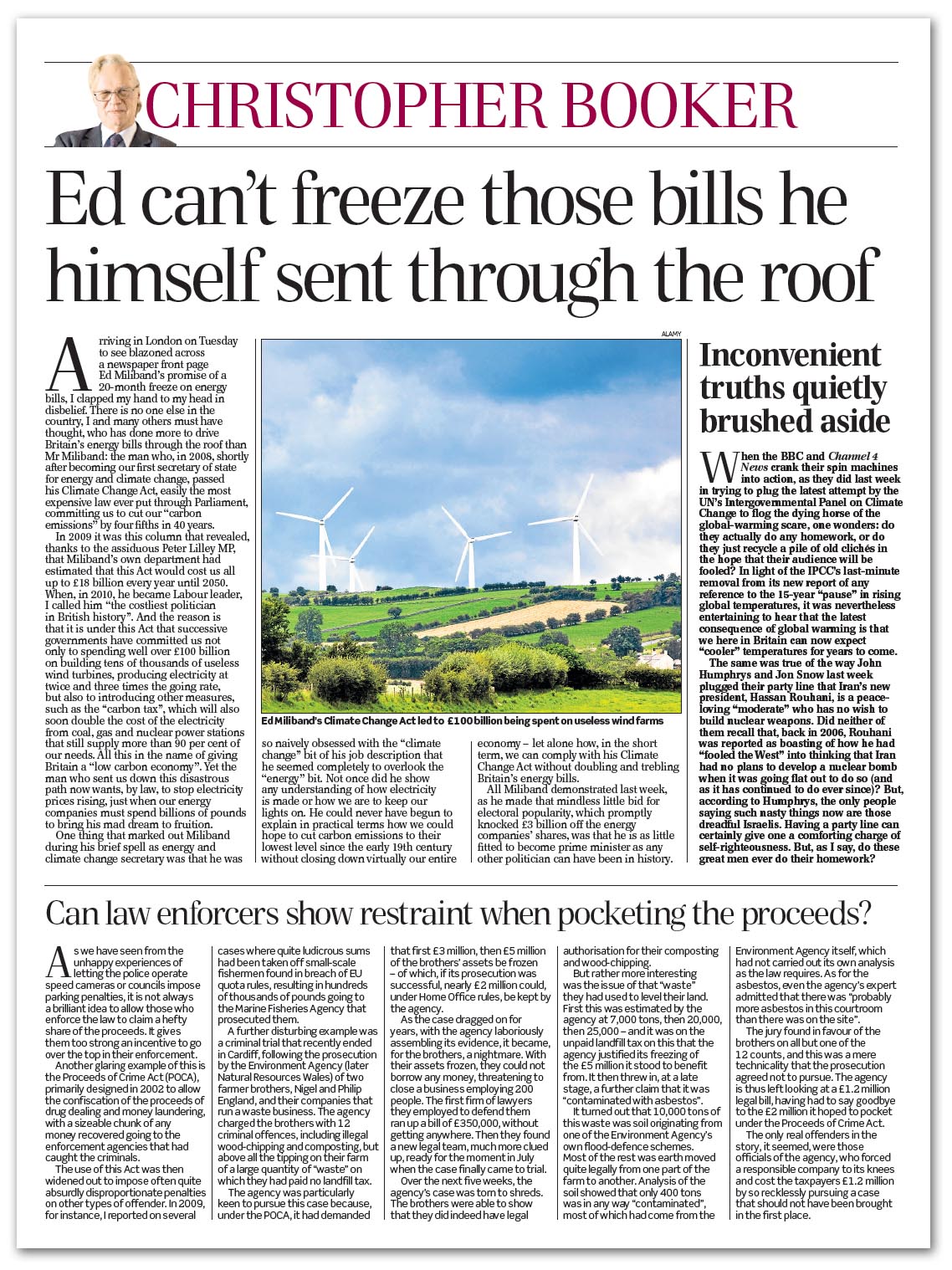 Few people are as well qualified as Booker to comment on Ed Miliband's amazing Technicolor energy bill freeze and it is this commentary which comprises the first of his three stories (above).

The essence is something most of us already know – but which needs saying again and again – that it is Mr Miliband who, more than anyone else in this country, has conspired to drive Britain's energy bills through the roof.

This is the man who, in 2008, shortly after becoming our first secretary of state for energy and climate change, passed his Climate Change Act, easily the most expensive law ever put through Parliament, committing us to cut our "carbon emissions" by four fifths in 40 years.

In 2009, it was Booker who told us, thanks to the assiduous Peter Lilley MP, that Miliband's own department had estimated that this Act would cost us all up to Ł18 billion every year until 2050. When, in 2010, he became Labour leader, Booker called him "the costliest politician in British history".

The reason is that it is under this Act that successive governments have committed us not only to spending well over Ł100 billion on building tens of thousands of useless wind turbines, producing electricity at twice and three times the going rate, but also to introducing other measures, such as the "carbon tax", which will also soon double the cost of the electricity from coal, gas and nuclear power stations that still supply more than 90 percent of our needs.

All this is in the name of giving Britain a "low carbon economy". Yet the man who sent us down this disastrous path now wants, by law, to stop electricity prices rising, just when our energy companies must spend billions of pounds to bring his mad dream to fruition.

One thing that marked out Miliband during his brief spell as energy and climate change secretary was that he was so naively obsessed with the "climate change" bit of his job description that he seemed completely to overlook the "energy" bit. Not once did he show any understanding of how electricity is made or how we are to keep our lights on.

He could never have begun to explain in practical terms how we could hope to cut carbon emissions to their lowest level since the early 19th century without closing down virtually our entire economy – let alone how, in the short term, we can comply with his Climate Change Act without doubling and trebling Britain's energy bills.

All Miliband demonstrated last week, as he made that mindless little bid for electoral popularity, which promptly knocked Ł3 billion off the energy companies' shares, was that he is as little fitted to become prime minister as any other politician can have been in history.

Remarkably, though, we now see Michael Gove supporting Miliband's attack on the energy companies, while prime minister David Cameron is also agreeing that "action needs to be taken" to reduce energy bills.

Instinctively, we would share the suspicion that the corporate energy giants are milking the uncertainty in the system to maximise their incomes, and maybe there is room for an examination of their contribution to the price hikes that we are all experiencing.

But, given the contribution that all our politicians have made to increasing costs, and their determination that costs should rise, as a matter of policy, to incentivise reduced consumption and thus lower CO2 emissions, it is to the politicians that we must look for substantial, long-term cuts in energy prices.

Such is the fantasy world that our politicians inhabit, though, that they can fail to recognise their own contributions to the situation, and point us all in the direction of the energy companies as the villains responsible for our problems.

But Ed Miliband is the one who has elevated political myopia to the status of an art form, happily chirping away at the Labour Party conference, when any normal human being would be hiding their faces in shame. In nothing else, therefore, one has to admit that, in this particular respect, Mr Miliband's certainly got talent.