EU politics: a convention in the offing? 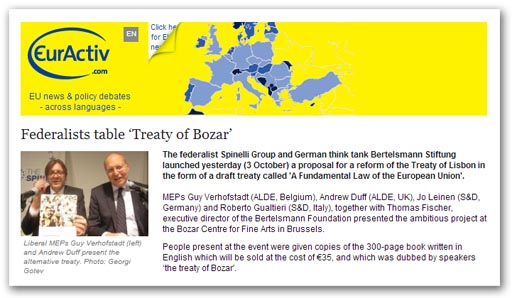 The federalist Spinelli Group and German think-tank Bertelsmann Stiftung have been busy, according to Euractiv. They have been preparing of a draft treaty called "A Fundamental Law of the European Union" in preparation for a treaty Convention, which they want to start in the spring of 2015.

Bertelsmann, we recall, were at it in June, contemplating a timescale of two to three years, and now it looks as if that timing is firming up. And two days ago, MEPs, Guy Verhofstadt, Andrew Duff, Jo Leinen and Roberto Gualtieri, together with Thomas Fischer, executive director of the Bertelsmann Foundation, presented their ambitious project at the Bozar Centre for Fine Arts in Brussels.

Andrew Duff appears to be the fronting the publication of the draft treaty, which has already acquired the nickname the "Bozar Treaty". Duff says that 210 MEPs from four political groups, united in the Spinelli group, had decided last December to write a project for a new EU treaty, drawing lessons from the eurozone crisis. He wants the proposed text to be used by a Convention to amend the Lisbon Treaty.

The group does not lack ambition when it comes to the content of this proposal. It wants the EU defined as a federation of member states with members obliged to respect the "values of the EU". Structurally, the European Commission would becomes the EU government (as it already is), and the Council would become a second chamber of European Parliament, with the Commission accountable to both chambers.

Council and [the lower chamber of] the Parliament would be given a limited right of legislative initiative; the rotating presidency would be abolished; the number of Commissioners would be reduced and the Commission president would nominate commissioners.

Other changes proposed include some MEPs being elected in pan-European electoral districts, on the basis of transnational lists; the eurozone gets a separate budget; ECB powers are enhanced; mutualisation of debt becomes possible on the basis of strict budget discipline; and unanimity for treaty change is removed.

Crucially, a new category of "associated member state" is created – which presumably is where the UK is headed – an option which enables the core members to seek full integration without being hampered by the less enthusiastic members.

Any such development would, of course, change the calculus in many ways. For a start, a convention would be an absolute requirement, as specified by Article 48 of the Treaty. There would be no avoiding one, with this scale of change proposed.

The timing, though, could severely damage Mr Cameron's plans, in a very awkward way. A convention declared in the spring of 2015 would be just a few months from the general election. that would put a new treaty on the table around 2018.

Then, somebody is going to work out that this will require a "yes-no" instead of an "in-out" referendum, under the referendum lock – and it will not be happening before 2018. As the general election campaign get under way, Mr Cameron's carefully crafted "Europe" strategy will be in tatters. He will be chained to a promise cannot possibly deliver.

Should the "associated member state" idea gain traction, though, that might just give Mr Cameron a way out. Come the day, one could see him argue for the new treaty to be ratified, thus allowing the UK to take the "associated" path.

However, that assumes the Conservatives ever win the election and, on the back of a collapsed strategy on "Europe", that may be doubtful – if the electorate actually care enough for that to make the difference.

All the same, we are now entering another phase of the game. The narrow claustrophobia of the UK scene is breaking apart, and the possibilities are beginning to expand beyond the reach of domestic players. There are 28 countries in "Europe", as Barroso reminded us recently. And, before the game is over, they are all going to have their say.  The UK isn't going to be deciding the agenda.