Looters: the answer to fuel costs 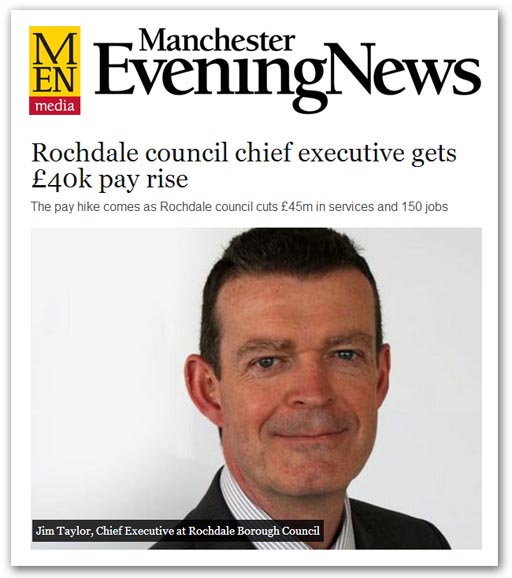 As the newspapers front page headlines today scream about increased energy costs – with the Independent reporting that the Red Cross is launching an emergency food aid plan for the UK's hungry, this blog can reveal a guaranteed way of beating price rises – become the CEO of your local council.

More specifically, according to Manchester Evening News, follow in the footsteps of Jim Taylor, chief executive of Rochdale council. He is about to see his pay soar by Ł40k to Ł170,000 following a senior management review.

The man looking after the Council's climate change policy, part of the ramp which has seen the massive hike in utility prices, is also a beneficiary of this review. Mark Widdup, Rochdale's, laughingly entitled director of economy and the environment, could also see his pay range rise from Ł61,536-Ł71,376 to up to Ł108,987 under the new regime.

On the other hand, Rochdale is cutting Ł45 million in services with 150 jobs lost. The pay of other workers has been frozen and council tax has been hiked by 3.5 percent. But Mr Taylor never need worry about where his next penny is coming from. If his captive "customers" don't pay up on time, he can add illegal court fees to their bills and then send the bully-boy bailiffs out after them, who can ramp up the charges even further.

And then, to secure Mr Taylor's generous pension package, which makes him better-paid paid than the prime minister - who only has the national government to look after - defaulters can be put in prison.

By contrast, I suppose it is of some consolation that Mr Stephen Porter of Great Places Housing Group can't put his tenants in prison. But that's where he should be, having extracted from "Great Places Housing Group" - a staggering Ł436,000 before quitting in April this year, including a huge Ł276,000 pay-off when he left.
This was to perform the tasks of what were one carried out by Council housing officers, and so diligently has Mr Porter – with his 23 percent pay hike – performed his duties that he has been foremost in contributing to the estimated 25,000 social housing or council tenants across the region who have fallen into rent arrears.

However, if ripping off council tenants in Manchester, or lording it in sunny Rochdale doesn't attract, and you are not particularly turned on by the prospect of raping teenage girls, courtesy of the Mr Taylor's Rochdale Social Services, you could have gone to Caerphilly where, until recently, it was liberty hall on executive pay.

Unfortunately for them, a report from the Wales Audit Office (WAO) found that Ł488,927 was paid out unlawfully to Caerphilly officers following three separate decisions: Ł270,364 in respect of unlawful pay rises, Ł102,709 in unlawful buy-out payments to compensate for the loss of essential car user allowances, and Ł115,854 in unlawful buy-outs of additional annual leave.

Huge pay rises for 21 senior managers at the authority were authorised by a committee of one Plaid Cymru and four Labour councillors in September last year, at a time when the bulk of the council workforce was enduring the third year of a pay freeze. But it took a council staff rebellion to get the issue sorted.

Nevertheless, we are so lucky in this country to have such a vibrant, healthy democracy, with such fine upstanding public servants looking after our local interests. And, as Mr Taylor no doubt would be the first to agree, it only makes sense that freezing pensioners should cough-up more than 20 percent of their annual state pensions in council tax, to keep such sterling men and women warm and financially secure.