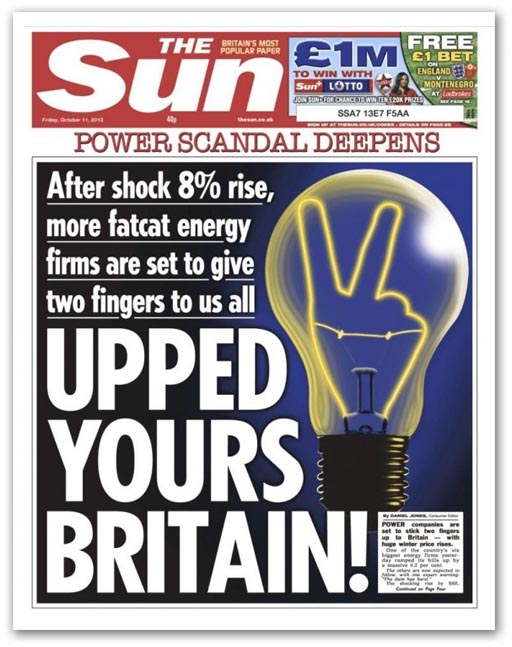 I neither know nor care what The Sun story actually says – hilariously, it's behind a paywall, as if anyone is going to pay for something they wouldn't even read for free. But the headline is of interest, signalling along with most of the day's press, that energy costs have well and truly arrived as a political hot potato.

The torrent of coverage has been triggered by the energy giant SSE increasing its prices by 8.2 percent and, while newspapers such as The Sun (and politicians) are quick to dump the blame on the energy companies themselves, SSE is saying that our energy bills would be Ł110 a year lower if green levies were reduced.

This comes from Will Morris, group managing director of retail arm, but all he is interested is passing on the cost to the consumer via the overt tax route, rather than through levies hidden in our utilities bills. No friend of the consumer os Mr Morris – he just wants to escape blame for the price hikes.

What is interesting is to see the politicians distance themselves from the increases, hence the fatuous Mr Miliband attempting to impose a price freeze, even though – as former energy secretary - he has been one of the people most responsible for the increased costs.

As one might expect, not that the issue is "mainstream", the legacy media are jumping on the bandwagon, but this has been building to crisis level for a long, long time, with every little notice taken of it. Five years ago, as we were writing for the umpteenth time, the path was already set, and what we have now was entirely predictable (and predicted), with our appeal to the Conservatives in July 2008.

Never properly explained, though, is that the price increases are the result of deliberate government polity, using the price mechanism to reduce demand and thereby enable successive governments to meet self-imposed targets for "decarbonisation".

Where the politicians have been caught out is in listening to Green propaganda, offering the fools' paradise of increased energy efficiency, though more efficient appliances and insulation, without realising that low-income families are quite unable to offset increased costs in this manner, making fuel poverty the problem of our times – and again one which was entirely predictable.

The problem with energy policy, though, is that it rests on decisions taken many years ago. It is very difficult to change the course of the proverbial supertanker, and we are not having to reap the effect of poor decision-making taken over decades.

So now we have media headlines telling us that "millions face 'eat or heat' dilemma as energy bills soar", but in the years when the policy failures were stacking up, the press was largely silent.

And now, energy minister Michael Fallon has the brass neck to call on consumers to boycott SSE and switch to one of its cheaper rivals. He thus says: "I would encourage customers to see if they can switch to a cheaper tariff".

Actually, I have a better idea. We should boycott government, and switch to one of its cheaper rivals. Certainly, Mr Fallon should not be allowed to disguise the fact that this was a predictable crisis and one which is politically-induced, for which successive governments are wholly responsible.