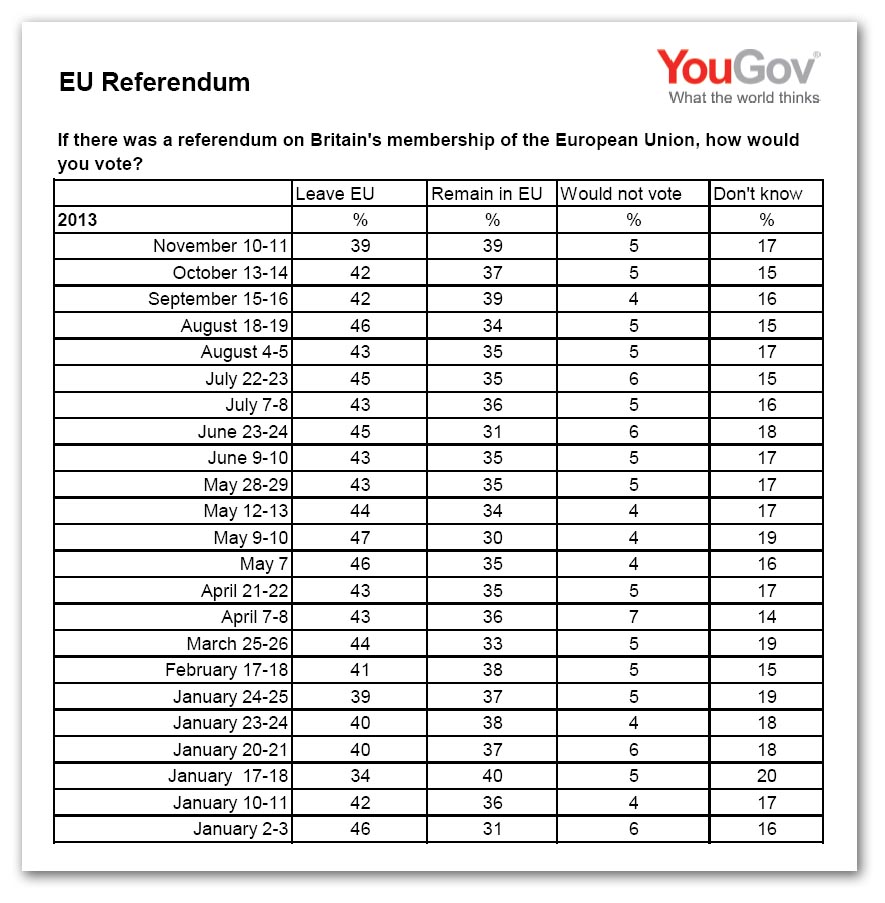 According to the latest YouGov poll, if there was a referendum on Britain's membership of the European Union, the result would be a dead heat. Leaving the EU gets 39 percent of respondents while staying in gets exactly the same number.

This is the lowest margin of the year so far, dropping 17 points from the peak in 9-10 May when the "outers" stood at 47 percent and the "inners" took 30 percents. By August, the margin had dropped to 12 points and last month it stood at a mere five points.

Adding in the status quo effect, which could give the "inners" as much as 20 points, this current result signals a likely heavy defeat of an "out" campaign if there was an immediate referendum.

Worse still, when respondents are asked to imagine that the British government under David Cameron has renegotiated our relationship with Europe and said that Britain's interests were now protected, and that David Cameron recommended that Britain remain a member of the EU on the new terms, the "inners" get 51 percent while the "outers" drop to 25 percent (figures wrongly transposed on chart).

This is a fairly consistent finding, with a 2:1 margin also experienced in January and last month's YouGov poll giving a 52:28 margin, more than enough to ensure victory for the "inners".

The findings are also consistent with other polls, such as the Mail on Sunday poll last October, which had 46 percent wanting to quite the EU, against 38 percent wanting to stay in, while a renegotiation would deliver 47 percent to the "in" camp while 30 percent would want to leave the EU.

On two levels, then, in terms of absolute numbers and trend, all the indications are that a referendum held any time in the near future (with or without renegotiation) would keep us in the EU. Furthermore, despite apparently growing anti-EU sentiment, the margin supporting an EU exit is shrinking.

However, while UKIP media exposure has increased, over term we have seen the party gradually retreat from EU issues. Thus, linkage between anti-EU sentiment and UKIP support is no longer clear-cut.

Whatever else though, the polls are telling us that an immediate EU referendum is a lost cause. Only those who are determined that we should stay in have anything to gain from a referendum this side of the general election. For genuine opponents of the EU, advocacy of an early referendum is nothing short of political suicide.