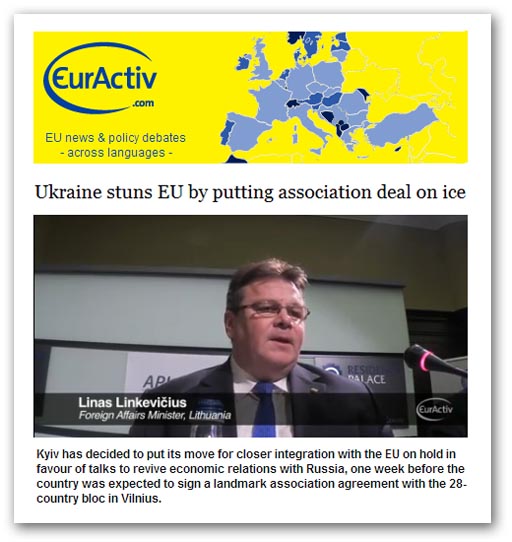 It wasn't so very long ago that a certain Mr Cameron made a hugely provocative pro-EU speech. That was on the day Croatia became the Union's 28th member state as he toured the former Soviet republic of Kazakhstan.
Talking to Kazakh students in the capital Astana, he said: "Britain has always supported the widening of the EU", then adding, "Our vision of the EU is that it should be a large trading and co-operating organisation that effectively stretches, as it were, from the Atlantic to the Urals".

The Urals, of course, mark the unofficial border between Europe and Asia in Russia and Mr Cameron's remarks were taken to indicate that he believed that Ukraine, once known as the bread basket of the USSR, should be admitted to the EU.

But now, that idea, shared in a different form by a German politician of rather ill-repute, seems to be running into the sand. Just a week before the Ukraine was due to sign a landmark association agreement with the EU, in Vilnius, Kiev has decided to put the whole show on hold.

The writing was on the wall when the Ukrainian parliament failed to pass laws that would allow jailed opposition leader Yulia Tymoshenko to go to Germany for medical treatment. Her release was seen as a sine qua non condition for the signature of the association agreement.

Two hours later, the Ukrainian government announced it had decided to stop its preparations to sign an association agreement with the EU. The statement underlined that the decision was taken with a view to elaborating measures towards "Russia and other countries from the Community of Independent States".

Ukraine said it would propose to the EU and Russia the formation of "a tripartite commission to handle complex issues". Also, Kiev will "resume an active dialogue with the Russian Federation and other countries of the Customs Union and the member states of the CIS on the revival of trade and economic relations in order to preserve and strengthen joint efforts of economic potential".

The statement does not say whether Ukraine intends to join the Customs Union led by its former Soviet master Russia, which the EU says is incompatible the statute for countries associated with the Western bloc.

Apparently, following the statement, EU officials were "thunderstruck". Appearing at a press event minutes after the Ukrainian government's decision became known, Linas Linkevi?ius, foreign minister of Lithuania (pictured above), currently holding the EU presidency, said there was not enough clarity following the announcement, and the best option was "to wait" for more information.

So far, it seems, that information has not materialised, which means that things are no looking too good for the "evil empire".

In the good old days, countries were queuing up to join. But now Norway and Iceland are permanently off the agenda, Turkey is very dubious and the eastern satellites are breaking away. Legend has it that, unless le projet continues to go forward, it goes backwards. Irony abounds these days, with the thought of it running out of steam on the steppes of Russia.

For you, they might soon be saying, the dream is over.