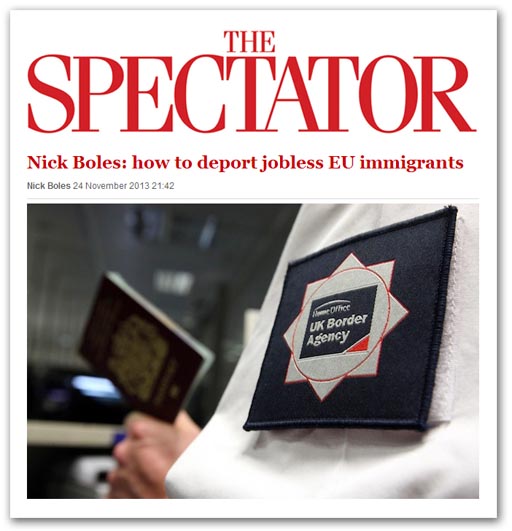 Spasmodically re-reading Stephen Cooper's book on blogging and the media, I have come across his description of the legacy media as "gatekeepers" of knowledge, defining their habit of seeking to restrict the information to which their readers are exposed.

An excellent example of this tendency comes in the online Spectator, where the magazine graciously deigns to acquaint its readers, via its own columnist, and then via self-publicist Nick Boles MP, with the vexed issue of mass migration.

In particular, Boles is allowed to instruct us on Directive 2004/38/EC, which "deals with the right of the citizens of the Union and their family members to move freely within the territory of the member states and live where they like".

This directive, Boles tells us, maintains the requirement that EU citizens need to "exercise an economic activity or dispose of sufficient resources in order to take up residence in another Member State". If this requirement was incorporated into British law, the MP asserts, it should now be robustly enforced.

Never mind that this issue has been actively rehearsed on this blog many times, and especially six years ago, on 6 November 2007, when we acquainted our readers with the specific provisions of the directive which required immigrants to

Even the Daily Mail was on the case then, but it takes until now for Boles to argue that the directive could be used to deny all benefits and other services to jobless migrants from within the EU. They should, he asserts, be told to leave the country on the basis that they are not legally resident in the UK.

However, as we pointed out at the time, the directive only authorises the expulsion of Union citizens on "grounds of public policy, public security or public health", specifically stating: "These grounds shall not be invoked to serve economic ends".

This, on the face of it, would rule out the idea Boles has belatedly brought to the table, unless of course we are talking about the mass expulsion of Roma from the shanty towns around Rome.

That detail (and the context) is something the Spectator could have picked up if it had consulted the country's premier anti-EU blog. But, as Stephen Cooper indicates, the legacy media isn't in the business of informing itself or its readers. Its job is to act as gatekeeper, controlling the flow of information and keeping its readers in the optimal state of ignorance.

Had the Spectator other objectives, it might have pointed to yesterday's post, with its reference to Regulations 883/2004 and 987/2009 which heavily modify the economic provisions of 2004/38. Essentially, any "EU citizen" who might be entitled to benefits in their home country is entitled to benefits in any EU member state in which they chose to reside, on the same terms as the settled population.

With that, what the magazine doesn't even begin to realise is the extent of the web that binds us. It is not only EU law that restricts government action but also the framework of agreements channelled through the Council of Europe and, in particular the European Social Charter, monitored by the European Committee on Social Rights (ECSR), with the detail set out in this 140-page handbook.

The effect of this is seen recently in Sweden , where the ECSR "slammed" Sweden for failing to guarantee equal rights for foreign guest workers. There was, said the committee, an absence of accessibility to voluntary negotiations between employers and worker organisations, and disproportionate restrictions on the right of trade unions to take collective action in order to regulate employment terms of posted workers.

To these specific provisions, the UK has not signed up, but what the Swedish case highlights is the way that EU and Council of Europe provisions work in concert, with one set used to augment and reinforce the other.

In this particular context, we also have the European Code of Social Security (ratified in January 1968) and its Protocol, as well as the Revised European Code of Social Security. These "set standards in the social security field on the basis of minimum harmonisation of the level of social security, providing minimum standards" and permit (or rather encourage) the contracting parties "to exceed these standards.

These, of course, are Council of Europe standards but, alongside these, we have concerted action by the International Labour Organisation through the Social Security (Minimum Standards) Convention - see, for instance, Article 68.

This complex nexus of law, treaties and agreements defies easy explanation or description, but drives a coach and horses through the simplistic assessments of a self-aggrandising MP and a lightweight political magazine.

Not anywhere from these sources does one get any inkling of the degree to which Ministers' hands are tied, or that the strands that bind them are the result of a series of agreements that go back decades (the ILO Convention is dated 1952, with UK ratification in April 1954) and were never designed to deal with today's circumstances.

Without this knowledge and understanding, we will never be able to appreciate the extent of the problems and the degree to which we are ensnared, and thus we will never even begin to formulate solutions. Then, the last thing we are supposed to do is call for workable solutions. That might actually force the establishment to implement them, so it is better to keep the population in its state of benign ignorance.

In that task, the Spectator, along with the rest of the legacy media, is proudly doing its bit. Ironically, it even manages to get paid by its victims for its services to the establishment, thereby ensuring that the people are actually financing their own chains. Rarely have we made it so easy for our rulers.