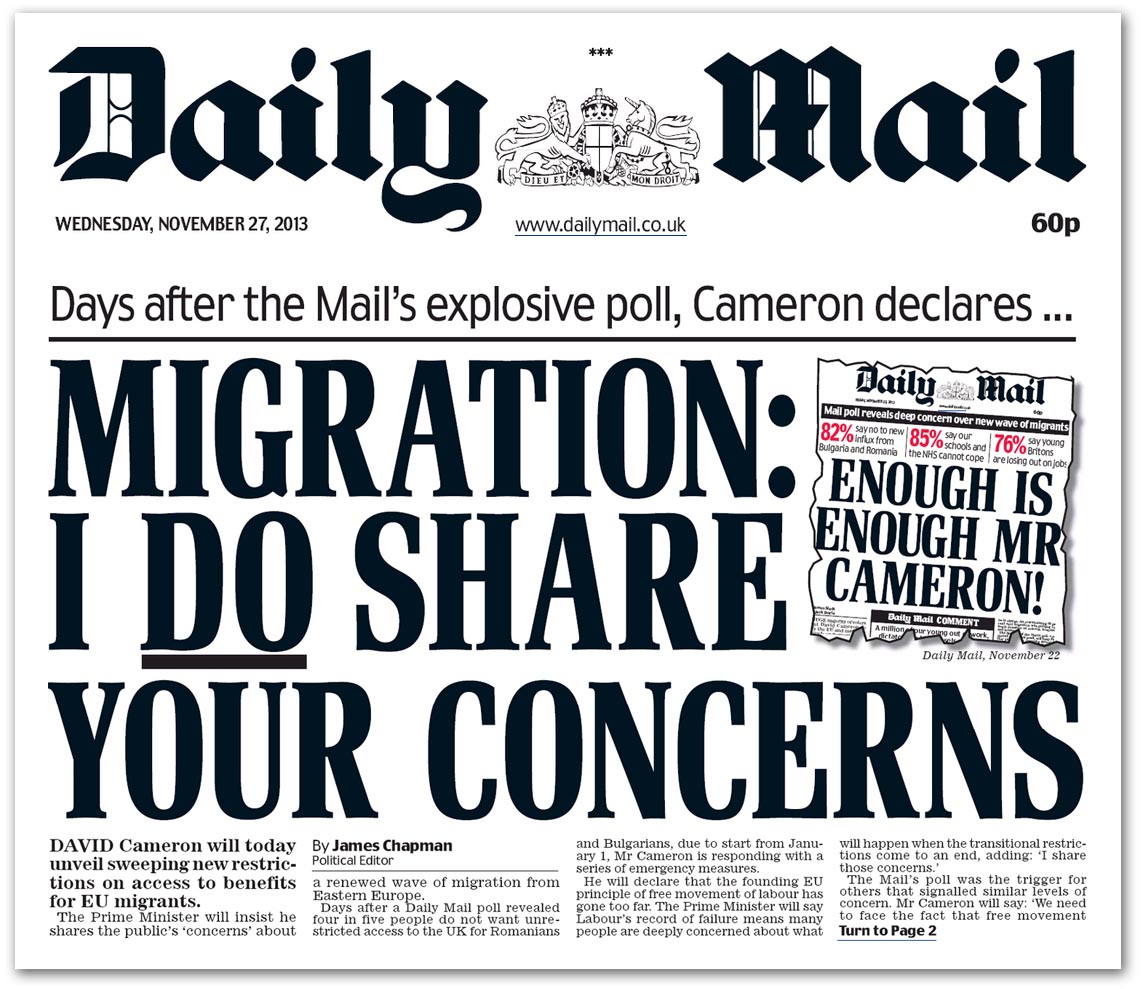 Yesterday, I wrote a piece under the title, "we await the spectacle", speculating that Mr Cameron could perhaps have a secret weapon up his sleeve, ready to unleash on the unsuspecting migrant population, solving for once and for all what has hitherto seemed an intractable problem.

Well, we didn't have long to wait. For what it's worth, here it is on the front page of the Daily Mail, with an authored piece in the Financial Times.

That piece is headed, "Free movement within Europe needs to be less free", with David Cameron colliding head-on with the most fundamental of all the EU treaty provisions, one that goes right back to the 1957 Treaty of Rome.

With the Mail telling us that Mr Cameron "will today unveil sweeping new restrictions on access to benefits for EU migrants", we learn that he "will insist that he shares the public's 'concerns' about a renewed wave of migration from Europe", declaring that "the founding EU principle of 'free movement' for workers has gone too far".

Ever since the fall of the Berlin Wall, he writes in the Financial Times, Britain has championed the case for bringing nations which languished behind the Iron Curtain into Nato and the EU. That is important to their prosperity and security – and ours.
Britain, he says, has also been one of the strongest supporters of a single market. It is in our interests for that it should grow, and for our citizens to have the opportunity to work in other European countries, he adds.

But, he now says, "things have gone wrong". Since 2004, we have witnessed the biggest migration in Europe outside wartime. In Britain's case, one million people from central and eastern Europe are now living here.

Pinning the blame on Labour for its failure to impose transitional controls in 2004, calling it a "a monumental mistake", he talks of the "lesson on income disparity". It was hardly surprising, he says, that with income per head in the joining countries around half of the EU average, so many people chose to come here.

Yet when Romania and Bulgaria joined the EU, Cameron asserts, "Labour had not learned the lesson. That was the moment to address difficult questions about when to allow new entrants full access to each other’s labour markets – but the Labour government ducked these questions. That is why this government extended transitional controls on Bulgaria and Romania from five to the maximum seven years".

The other major lesson, we are told, was that failures in immigration policy were closely linked to welfare and education. If it does not pay to work, or if British people lack skills, that creates a huge space in our labour market for people from overseas to fill.

Says Cameron, "You cannot blame people for wanting to come here and work hard; but the real answer lies in training our own people to fill these jobs. That is what this government is doing: providing record numbers of apprenticeships, demanding rigour in schools and building a welfare system that encourages work".

However, he does finally get down to recognising that "people are most concerned with the action we are taking now". We are, he says, "changing the rules so that no one can come to this country and expect to get out of work benefits immediately; we will not pay them for the first three months".

"If after three months an EU national needs benefits", he adds, "we will no longer pay these indefinitely. They will only be able to claim for a maximum of six months unless they can prove they have a genuine prospect of employment".

Mr Cameron also says that his government will toughening up the test which migrants who want to claim benefits must undergo. This will include a new minimum earnings threshold. If they don't pass that test, access to benefits such as income support will be cut off. Newly arrived EU jobseekers will not be able to claim housing benefit.
If people are not here to work, Cameron says, if they are begging or sleeping rough, they will be removed. They will then be barred from re-entry for 12 months, unless they can prove they have a proper reason to be here, such as a job. We are also, he says, clamping down on those who employ people below the minimum wage. They will pay the price with a fine of up to Ł20,000 for every underpaid employee – more than four times the fine today.

Furthermore, we are told that Britain is not acting alone in taking these steps. Other countries such as the Netherlands already impose a three-month residence requirement before you can access benefits such as job seekers' allowance. All this is what we can legally do within the limits of the treaties Labour signed up to, Mr Cameron says.

Finally, he sets out how the Conservatives are planning to prevent these problems arising in the future. The EU of today, he says, is very different from the EU of 30 years ago.

"We need to face the fact that free movement has become a trigger for vast population movements caused by huge disparities in income. That is extracting talent out of countries that need to retain their best people and placing pressure on communities".

Thus, he says, it is time for a new settlement which recognises that free movement is a central principle of the EU, but it cannot be a completely unqualified one. We are not the only country to see free movement as a qualified right: interior ministers from Austria, Germany and the Netherlands have also said this to the European Commission.

So Britain, as part of our plan to reform the EU, will now work with others to return the concept of free movement to a more sensible basis.

Cameron goes on to say that we need to do the same with welfare. For example, free movement should not be about exporting child benefit. He wants "to work with our European partners to address this".

Bringing new countries in to give them peace and prosperity remains one of the EU's greatest strengths. It will be many years, perhaps a decade, before another country joins. It cannot be done on the same basis as it was in the past. We must put in place new arrangements that will slow full access to each other's labour markets until we can be sure it will not cause vast migrations.

There are various ways we could achieve this, he says. One would be to require a new country to reach a certain income or economic output per head before full free movement was allowed. Individual member states could be freed to impose a cap if their inflow from the EU reached a certain number in a single year.

Thus he concludes that the EU needs to change if it is to regain the trust of its peoples. He tells us he looks forward to working with other countries who also want reform – and to putting the choice about our future in Europe in a referendum.
If he is prime minister after the next election, he says, the British people will have their say.