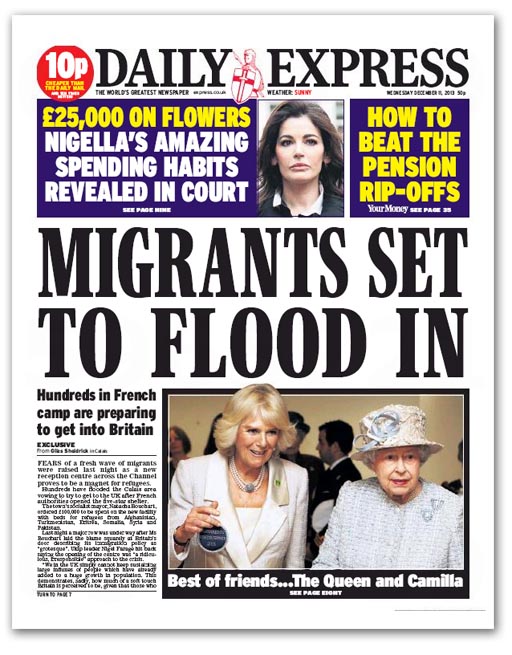 Sometimes reporting what appear to be the simplest things turn out to be the hardest. Thus, a look a the Express front page today yielded this story which offered the prospect of a "quick and dirty" post on the continuing theme of immigration. But, as so often, it turns out to be more complicated than at first appears.
The story itself is headlined: "Shelter in Calais generates fears of increased numbers of migrants to Britain", and it tells of "fears of a fresh wave of migrants were raised last night as a new ­reception centre across the Channel proves to be a magnet for refugees".

Hundreds of would-be immigrants have flooded the Calais area vowing to try to get to the UK after French authorities opened what the Express is calling "the five-star shelter". The town's mayor, Natacha Bouchart, we are told, has ordered Ł100,000 to be spent on the facility.

But what leapt off the screen was the origin of these people, who are being described as refugees from Afghanistan, Turkmenistan, Eritrea, Somalia, Syria and Pakistan. In other words, these are not citizens of EU member states and they do not enjoy the "freedom of movement" provisions which have been the subject of so much recent controversy.

What then makes this more interesting is that Bouchart is blaming the UK for the problem, which is causing so much grief to Calais locals. An estimated 400 migrants are currently living in dilapidated buildings or camping out in Calais, creating disruption quite out of proportion to their numbers.

Something needed to be done - hence the shelter. But at the heart of the problem says Bouchart is Britain's "grotesque and hypocritical" immigration policy. Deputy mayor Philippe Mignonet, puts clothes on this, complaining that "Britain says we don't want immigrants but does nothing to prevent black economy employment yet two million people work on the black in Britain".

This is a grossly over-simplistic view but, nevertheless, Mignonet is illustrating the broader point. The UK is doing very little (or less than it should) to address the "pull factors" that make the country such an attractive destination for (some) asylum seekers.

At this stage, Nigel Farage enters the Express story, condemning the opening of the centre as "a ridiculous, irresponsible" approach to the "crisis". "We in the UK", he says, "simply cannot keep sustaining large influxes of people which have already added to a huge growth in population".

According to Farage, this development "demonstrates, sadly, how much of a soft touch Britain is perceived to be, given that those who have already reached the safety of France remain focused on coming to the UK specifically in hope of receiving handouts courtesy of the British taxpayer".
France, he adds, should honour its international duties, instead of "shirking" them, by processing asylum applications in the country in which they arrive.

The essence of the problem is that there are powerful forces driving migration. And while we expect all nations to live up to their obligations, this is not just a UK problem or even a European problem. The United States and Canada have had their share of asylum seekers, the former taking 278,000 and the latter 147,000.

Thus, the Europeans, quite independently of the EU, are entitled to expect the UK to help deal with a common problem, one which arises not from EU treaties but from the 1951 UN Convention on the Status of Refugees and the 1967 protocol, to which the UK is a signatory. These instruments are far from ideal, so there is little value is sticking to the letter. They were never intended to deal with the current situation.

However, as far as France – and Calais in particular goes - Britain could do more by addressing the "pull factors", but even that would have limited overall value without also dealing with the "push factors". But to explore and then deal with these requires grown-up politics. And, as we are all too aware, those are in short supply.