Booker: the power of the narrative 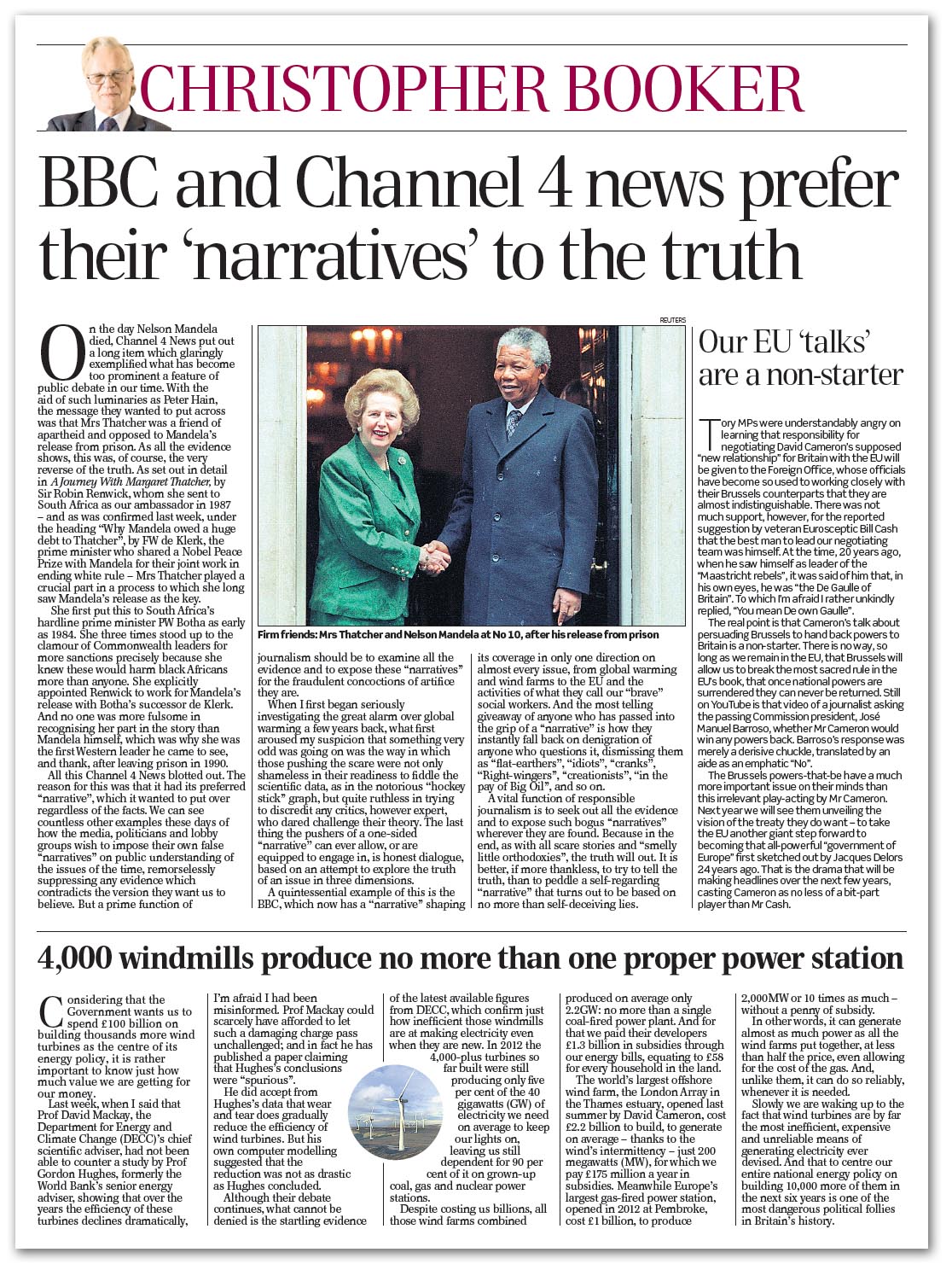 The "power of the narrative" is a term we have used now and again, as here and here - and with more use on Defence of the Realm. And now we get Booker picking up the theme, homing in on the BBC and Channel 4 news. Both, he writes, prefer their "narratives" to the truth.

On the day Nelson Mandela died, he says, Channel 4 News put out a long item that glaringly exemplified what has become too prominent a feature of public debate in our time. With the aid of such luminaries as Peter Hain, the message they wanted to put across was that Mrs Thatcher was a friend of apartheid and opposed to Mandela's release from prison. As all the evidence shows, this was, of course, the very reverse of the truth.

As set out in detail in A Journey With Margaret Thatcher, by Sir Robin Renwick, whom she sent to South Africa as our ambassador in 1987 – and as was confirmed last week, under the heading "Why Mandela owed a huge debt to Thatcher", by FW de Klerk, the prime minister who shared a Nobel Peace Prize with Mandela for their joint work in ending white rule – Mrs Thatcher played a crucial part in a process to which she long saw Mandela's release as the key.

She first put this to South Africa's hard-line prime minister PW Botha as early as 1984. She three times stood up to the clamour of Commonwealth leaders for more sanctions precisely because she knew these would harm black Africans more than anyone. She explicitly appointed Renwick to work for Mandela's release with Botha's successor, de Klerk. And no one was more generous in recognising her part in the story than Mandela himself, which was why she was the first Western leader he came to see, and thank, after leaving prison in 1990.

All this Channel 4 News blotted out. The reason for this was that it had its preferred "narrative", which it wanted to put over regardless of the facts. We can see countless other examples these days of how the media, politicians and lobby groups wish to impose their own false "narratives" on public understanding of the issues of the time, remorselessly suppressing any evidence that contradicts the version they want us to believe. But a prime function of journalism should be to examine all the evidence and to expose these "narratives" for the fraudulent concoctions of artifice they are.

When I first began seriously investigating the great alarm over global warming a few years back, what first aroused my suspicion that something very odd was going on was the way in which those pushing the scare were not only shameless in their readiness to fiddle the scientific data, as in the notorious "hockey stick" graph, but quite ruthless in trying to discredit any critics, however expert, who dared challenge their theory.

The last thing the pushers of a one-sided "narrative" can ever allow, or are equipped to engage in, is honest dialogue, based on an attempt to explore the truth of an issue in three dimensions.

A quintessential example of this is the BBC, which now has a "narrative" shaping its coverage in only one direction on almost every issue, from global warming and wind farms to the EU and the activities of what they call our "brave" social workers. And the most telling giveaway of anyone who has passed into the grip of a "narrative" is how they instantly fall back on denigration of anyone who questions it, dismissing them as "flat-earthers", "idiots", "cranks", "Right-wingers", "creationists", "in the pay of Big Oil", and so on.

A vital function of responsible journalism, Booker concludes, is to seek out all the evidence and to expose such bogus "narratives" wherever they are found. Because in the end, as with all scare stories and "smelly little orthodoxies", the truth will out. It is better, if more thankless, to try to tell the truth, than to peddle a self-regarding "narrative" that turns out to be based on no more than self-deceiving lies.

Booker's is an optimistic note, though, but I'm not sure I completely share it. The truth doesn't always out. To much of our media, and our political class, the "narrative" is far more important than the truth and they will defend it to the end. And not only do they rely on denigration. The technique used above all else is to retreat to their "bubbles" and isolate themselves from debate.

But this means, anything which strays from the "narrative" is ignored, while the bubble-dwellers drown out the truth with their prattle. What the media is able to do is increase the noise level to the extent that even the loudest dissident voices are unable to prevail, while the truth is never given a hearing.

As a result, "responsible journalism has become a rarity. Mostly, the "narratives" prevail.