EU politics: Turkey outside the narrative 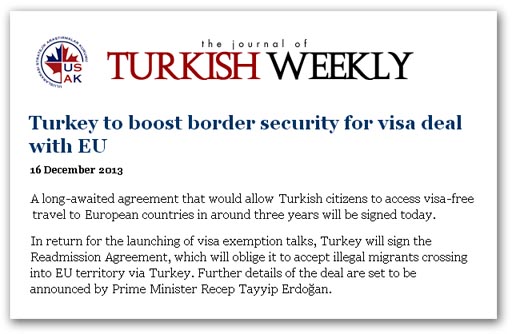 Booker's cri de coeur on the media narrative yesterday cuts two ways. As we would readily acknowledge here, it is not only what the media does say, it's what they leave out.

Rushing straight into that latter slot is the news of the "Readmission Agreement" due to be signed today between the EU and Turkey by EU Commissioner for Home Affairs Cecilia Malmstrom and Turkish Foreign Minister Ahmet Davuto?lu.
Apart from the BBC and the Financial Times, we see nothing of it in the British legacy media (unless you count a tiny piece in the Guardian that has just emerged), despite it being run fully in the German press and even in the Washington Post.

The essence of the agreement is that the Turkish government will undertake to accept the return of illegal immigrants (asylum seekers) who have used Turkey as their country of passage en route to Europe, thereby overcoming one of the greatest problems encountered by reception countries – the absence of a "safe" country that will take them back.

The agreement, incidentally, has taken eleven years to get this far. Negotiating directives were adopted by the Council on 28 November 2002 and the negotiations themselves were formally opened on 27 May 2005 in Brussels. The agreed text was finally initialled on 21 June 2012 in Brussels by the representatives of both Parties and finally signed today.

It is interesting how we had Farage recently whingeing about the shelter in Calais, complaining that France was "shirking" its international duties by not processing asylum applications and letting the migrants pass through to Britain.

That, we argued was a "little unfair" on France as, against our 138,000 asylum-seekers taken in between 2007 and 2011, France has absorbed nearly 207,000. The first port of call for these "asylum seekers" in the main is not France, which is as much an unwilling recipient of these people as is Britain.

Now, in exchange for talks on allowing Turkish citizens to access visa-free travel to European countries in around three years, Turkey will strengthen still further its borders to cut down the flow of migrants. To that effect, it will establish a civilian border security body, like the EU's Frontex, but it will also set up shelters and facilities for migrants sent back by European countries. The costs will be partially borne by EU taxpayers.

Speaking in Istanbul, Turkish EU Minister and Chief Negotiator Egemen Ba??? denied that Turkey would become a "haven of illegal migrants". There agreement had to be ratified by the Turkish parliament and its implementation would begin only three years after its ratification, after "substantial steps" had been taken fully to implement it.

Ba??? argues that providing the security for his country's borders is an issue his government is working on regardless of the EU process. " While 70,000 people illegally crossed Turkish borders in 2011, this number dropped to 35,000 in 2012 thanks to the measures we have taken on our borders", he says.

There is more to this, though, than at first appears. Turkey has traditionally been a transit country for illegal migrants and refugees, but it retains what is known as a Turkey retains a "geographical limitation" to its ratification of the 1951 UN Convention on the Status of Refugees, the "Refugee Convention".

As a result of this, only to those fleeing as a result of "events occurring in Europe" are technically considered refugees. The approximately 600,000 Syrians who fled civil war and found shelter on Turkish soil are regarded as "guests". And, it would appear, signing the Readmission Agreement will not oblige Turkey to remove its geographical limitation.

On that basis, while Turkish citizens get visa-free access to Europe, in practice we seem to get very little out of the deal. And this is where press comment, beyond the cut-and-paste level of the BBC, would be helpful.

For instance, Handelsblatt offers a sceptical note based on the observations of an officer of the Greek coastguard. Between Greece and Turkey, there have been ten years of bilateral repatriation agreements and "experience so far on the Greek side is not so good".

"In the past few weeks have been taken more than 300 migrants who landed on the islands of the eastern Aegean from Turkey in rotten boats and rafts from Turkey", says the officer. From past experience, but only about ten percent of these people will be returned. The process is bureaucratically complicated and it can be months and sometimes years before a refugee from Turkey can be returned to a so-called safe third country.

"We hope that it will be better this time," says the Greek Foreign Ministry spokesman, Konstantinos Koutras. The gradual lifting of visa requirements for Turkish citizens creates a "win-win" situation which should incentivise Ankara to comply.

Meanwhile, the extent of the problem for Greece put Britain's troubles into perspective. One in ten residents is a foreigner. Athens has legalised more than 700,000 immigrants over the past 15 years. An estimated 3-500,000 more people live in the country illegally. Petty crime has increased significantly and whole neighborhoods have turned into ghettos. Less than one percent of the applicants get asylum.

But unless such issues can be resolved at the Greek border, the ripples spread throughout Europe, ending with the queues of asylum seekers in Calais, waiting for an opportunity to enter the UK. And while "fortress Britain" has its superficial attractions, it is no substitute for a defence in depth, where potential illegal immigrants are intercepted before they actually land on EU member state territory.

And that's why, with immigration in the UK news, detail of this EU-Turkey agreement – for good and bad – is important, and should be covered in depth by the British media. But the problem is that Turkey is not part of the narrative.