Energy: fracking saved from the Greens 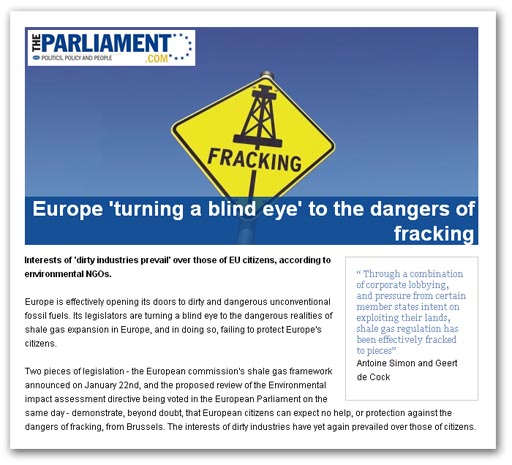 We got wind of it in August, that the Green NGOs were making a determined pitch through the Geneva-Brussels nexus to get EU law in place to ban fracking. It then got seriously serious about October, with firm proposals for new legislation, which looked by the end of that month to be a definite proposition.

However, spirited intervention by Owen Paterson and then by David Cameron himself, seemed to be producing results. By December, there were some signs that the regulatory monster might be held at bay.

Rumours are one thing, though, and we knew the Greens would be mounting a spirited rearguard action. They had invested a great deal of political capital in pushing for a ban and were not going to give up easily.

The news came a couple of days ago, though, in a Bloomberg report. The Commission had decided to hold back from making more law and instead was going to produce non-binding guidelines, set for publication on 22 January.

Even then, there was still the possibility of a last minute change, but it is not to be. Yesterday, we saw from the Greens squawks of protest, telling us that the new plans "demonstrate, beyond doubt, that European citizens can expect no help, or protection against the dangers of fracking, from Brussels". "The interests of dirty industries", we were told, "have yet again prevailed over those of citizens".

This is from Antoine Simon, shale gas campaigner for Friends of the Earth Europe, and Geert de Cock, policy officer for Food & Water Europe. The European institutions, and especially Jose Manuel Barroso, they say, have failed to put the interests of Europe's citizens at the core of their policy-making.

And, straight from the Greenies mouths, we learn that, "fracking will now go ahead in an unregulated fashion, and local communities, and constituencies, will be the ones who have to live with the disastrous consequences: water contamination, air pollution and an industrialisation of their regions".

Never one to leave it that though, we are warned to expect "a surge in local resistance across Europe, like that witnessed in the UK, Romania and Poland, and an ever-increasing gap between the interests of citizens, and the policies of those whose job it should be to protect them".

But the very stridency of the tone tells us a great victory has been won. Only a few months ago, the Greens were so certain of their ground that they were openly crowing that they were in control. But they reached too far and, for the moment, have been chopped back.

This is not the end of it, but for the time being fracking has escaped their grasp.