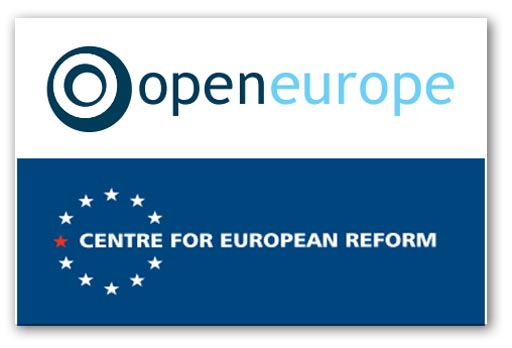 Reuters, today is trailing a report by the Centre for European Reform (CER), entitled: "The Great British trade-off. The impact of leaving the EU on the UK’s trade and investment".

The report rehearses [some of] the options for leaving the EU, coming to rather predictable conclusions, not least that, if Britain were to leave the EU, it would face "a difficult dilemma: having to negotiate access to the EU's single market in exchange for continued adherence to its rules – or losing access in return for regulatory sovereignty that would be largely illusory".

But what is particularly interesting about the report is that, by and large, the arguments and illustrations are remarkably similar to those put by Open Europe in its report: "Trading places. Is EU membership still the best option for UK trade?"

The CER, of course, is unashamedly Europhile but, between it and Open Europe which, for a long time, fooled people into thinking it was a eurosceptic organisation, there is no substantive difference. Both are wedded to the "reform" agenda, and both hold very similar views.

When it comes to spotting the difference between the two organisations, therefore, you would be hard put to it. They are essentially singing from the same hymn sheet.