A valuable lesson from a tale of two EUsceptics

Over time, on this blog and elsewhere and for very good reasons, the celebrated 'EUsceptic' and Tory rebel, Douglas Carswell has been labelled a Judas Goat - used to engender false confidence among others before coaxing them towards their demise.

Many have feted Carswell for the passable job he has done of giving the impression he was a principled EUsceptic, criticising those of us who dismissed him as being all talk.  But there is no pleasure taken by being vindicated in recent days as Carswell revealed his true self as one of Cameron's useful idiots and a partisan Tory first and foremost, in an interview he gave to the Spectator.

On Wednesday, Carswell explained how has decided to give up rebelling against Cameron's government; going on to add that he regrets signing the rebel amendment on immigration in the House of Commons and regrets signing Bernard Jenkin’s 'letter' to No.10 concerning EU regulation.  He is now firmly in Cameron's pocket and actively encouraging other rebels to give up and get with the programme:

‘What is it we now want, guys? We’re going to face a reckoning with the electorate in just over a year’s time. We’re two points behind the Labour Party. We can do this – we really can do this. If we lack discipline, we’re going to have five or six appalling years in opposition to dwell on it’

Joining with just about all of his fellow Tories, Carswell is putting his electoral and career prospects first by putting party before principle.  Some people have questioned whether Carswell has been given some inducement to start toeing the line, and Carswell's response confirms every accusation that he is an ignorant, ill-informed party hack: 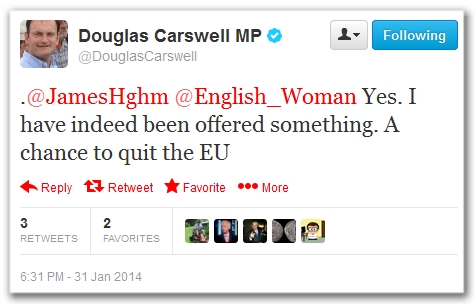 Carswell is referring to Cameron's laughable promise to hold an in-out referendum on EU membership in 2017.  As Richard North has explained on this blog many times, this is virtually an impossible commitment.

For that to happen Cameron has got to win an election in 2015 against hostile public sector interests, within a system that provides Labour with an in-built advantage in the number of seats won for every vote cast.
More importantly he has to initiate, without the power to do so, a convention that will discuss and agree a radical overhaul of the EU and its founding principles via a treaty, resulting in a return of significant powers from Brussels - all against a backdrop of the EU trying to resolve serious structural problems with its finances and the euro, which will require a new treaty of its own that will almost certainly be under negotiation during 2017.

Despite this, Carswell believes he has been offered the chance to quit the EU, which is why he is falling into lock step behind Cameron, the extremely enthusiastic Europhile.

Compare the lack of intellectual rigour on display from supposed EUsceptic Carswell with the packed agenda of Richard North over the last week, as he sought to add yet more knowledge and understanding to his arsenal to build compelling arguments that can win over the public and help EUsceptics win an EU Referendum.

It was North who identified the fundamental flaw in Cameron's 2017 referendum promise and its planned timing and brought it to public attention via this blog, often restating it in the context of 'current events'.
Yet despite the time that has elapsed, and increasing online discussion about the flaws in the referendum plan, Carswell's great mind still seems incapable of grasping the reality and instead buys into the ludicrous Cameron promise like a gullible shopper being tempted by a dodgy market trader operating out of a suitcase.

This then is the contrasting story of two EUsceptics.  On the one hand we have a prestigious, highly cited, flip-flopping fool who is prioritising his career as an MP and talking unmitigated rubbish while believing in a narrative that in terms of reality is on a par with Father Christmas and the Easter Bunny.
On the other we have a reliable man taking time away from home and family to meet with influential people in Iceland to learn more and build further understanding about how to tackle and overcome the EU - from people who are currently doing that for real - diligently accumulating evidence and material that can be used to further a genuine campaign to leave the EU.

There is a valuable lesson in this.  Relying on politicians to bring about the circumstances where the people's wishes on EU membership can be expressed and executed, is folly.  The campaign to leave the EU has to be run outside of party politics by people with no tribal party affiliation, who rely on facts and evidence to make winning arguments.
Too many politicians have shown that for all their promises, they cannot be relied upon.