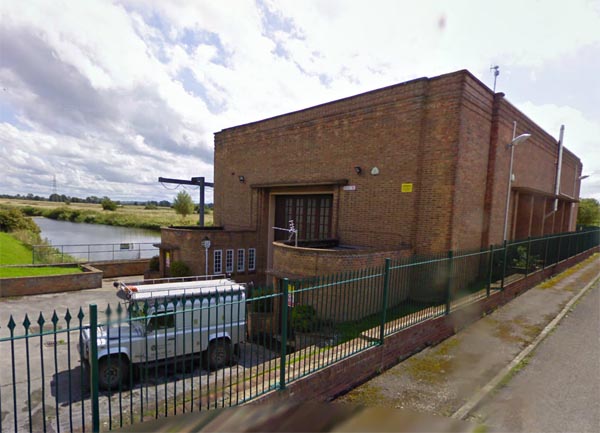 There has been great excitement over a possible explanation for the Somerset floods, said to be caused by the closure of the Bridgewater Royal Ordnance Factory and the cessation of pumping by the factory from the Kings Sedgemoor Drain (KSD) to the Huntspill River.
That story, however, is a complete red herring, initiated by an unverified anonymous comment on Tallbloke's Talkshop blog ("Cutting edge science you can dice with"), who argues the failure to keep pumping meant that "Somerset was flooded by E.A. (Environment Agency) Incompetence".

Nevertheless, the report  has since made an appearance on the Bishop Hill blog, initially as a comment and then upgraded to a full-blown blog post, misleading Watts up with that who has unwittingly used the material to hazard that the real reason for the flooding in Somerset Levels was that, "the pump was turned off!"

The story comes from a contributor who adopts the style: "Corporal Jones' Ghost" (CJG). He tells us "what really has happened on the Somerset Levels", starting with the history of the former Bridgewater Royal Ordnance Factory (ROF), which was built in 1939 to manufacture high explosives.

To ensure that there was enough water even on the waterlogged Levels, the five-mile long Huntspill River was built, which was connected to the River Brue to the North. CJG also claims that it was connected to the KSD via a pipe to the South.. We are told the River Sowy was also widened, in order to get water to the factory, said (by others) to use 4.5 million gallons a day.

According to CJG, process water was then discharged directly into the sea, which was done regardless of the tidal conditions, originally by steam pumps, which pumped out at the Huntspill sluice. With the fall of Communism, however, the decision was made to run down the ROFs and, in 2000 the Bridgewater factor was scheduled for closure in 2008.

That is the background, but we are now told that, with the demise of the factory, the Environment Agency and the Drainage Boards would have to take over the pumping. But, we are told, they couldn't afford the Ordnance Factory system as "it was very old and on restricted land".
CJG then "explains" that that the "ONLY pumping" was done by the Ordnance Factory, which had taken over the responsibility/control in 1940 for all high volume pumping on the Levels. Before departure, they advised that the Huntspill be automated and the KSD be pumped, "and made strong representation to that effect".

This, however, didn't happen and now, we are told that the connection to the Huntspill (with the KSD) is blocked, silted up. Thus, water can't be "smeared" over all the levels as in the past, and that is why "record" [flood] levels are being experienced in certain areas whilst others are barely affected. 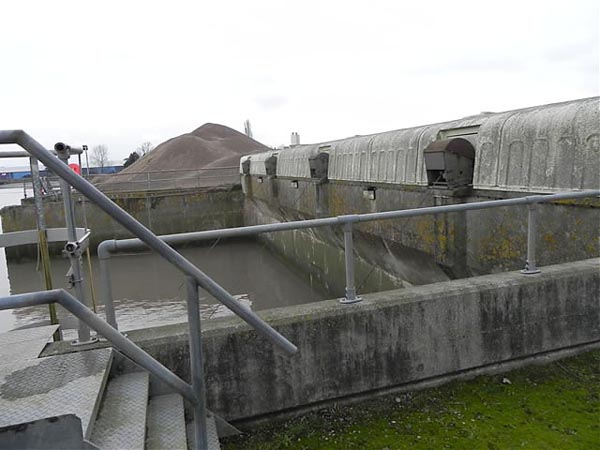 If I understand this narrative correctly, the essence of the argument is that there have been two failures of the Environment Agency. Firstly, they have failed to pump from Kings Sedgermoor Drain to the Huntspill, using the ROF equipment. Secondly, they have failed to build a pumping station at the seaward end of the KSD, to replace the Dunball Clyse (sluice) - see above, where the drain currently discharges sea, to enable continuous discharge, even at high tide.Either or both have been the "real" cause of the flooding in the Levels.

Thus says CJG, "the poor chap who has built an Island out of his home has my sympathies, [had] the KSD pumps been in place for the last 6 years he'd not be in the predicament he is in, nor for that matter would most of the others on the levels, the water won't be going anywhere soon".

Far be it for myself to question this exposition, but one has to note some flaws. As an incidental point, the River Sowy, for instance, was not created until 1972, as part of the Parrett Improvement Scheme. It was then that a 7.5 mile embanked channel was carved out from the Parrett near Langport, and given the name. As part of the £1.4 million scheme, the Dunball Clyse was also rebuilt.

The key point, though, was that consideration, we are told by Wikipedia, was given to replacing Dunball Clyse with a pumping station in 2002. This would have allowed water to be discharged into the Parrett estuary at all states of the tide, but this course of action was not followed.

Here, then, there may be a germ of truth in CJG's narrative, in that the discharge from the KSD might have been of insufficient capacity and needed upgrading.  Given that this is where the Environment Agency have currently positioned high capacity pumps, hired from the Dutch, one could argue that there is contemporaneous evidence that the Dunball Clyse is of insufficient capacity. 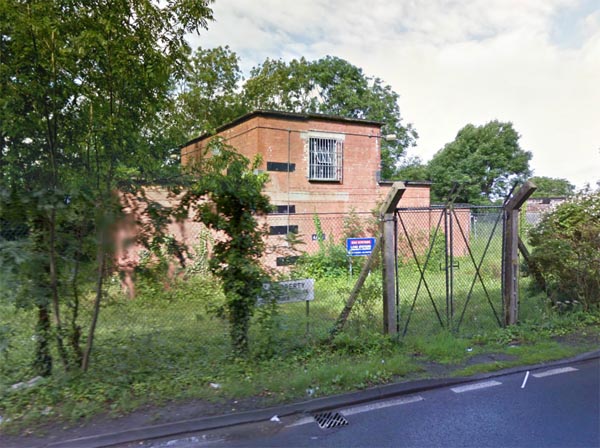 As to the rest of the story, we cannot verify it from any independent source, specifically that there was any direct connection between the Kings Sedgemoor Drain and the Huntspill river.
All we have is a report from Sedgemoor Council that the KSD provided a significant volume of water for the Ordnance Factory, with pumping operations occurring daily from the ROF owned pumping station at Crandon Bridge. We have identified the pumping station, and it is pictured above, as it stands on Google street view.

What comes over from the Crandon Bridge picture, though, is that the pumping station is quite small. Furthermore, it has been out of service for a long time, so this is not a question of a pump having been turned off - at least, not recently. But we also found the Huntspill Pumping Station, the exterior of which is shown below. Go to the site linked, and see what it is like inside. It has been derelict for a very long time. 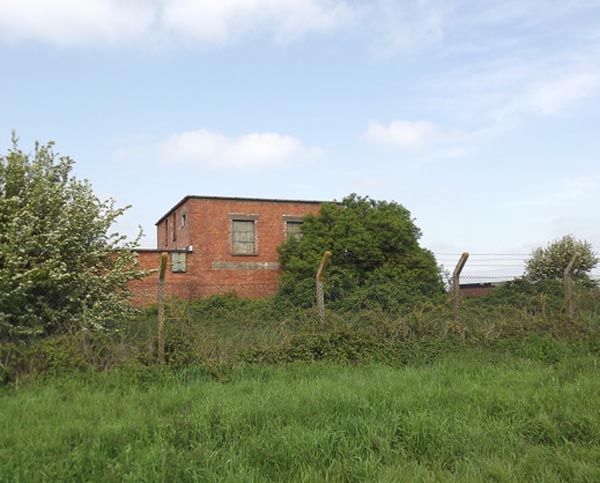 Hence, since so much time has passed since these pumping stations were last used, they are not part of the modern flood management system.  It seems to us that the Ordnance Factory element is a red herring.
Crucially, even when the system existed, it was not a direct part of the flood management system. Its primary function was to extract water for processing, whence - after use - the bulk of it may have been pumped into the Huntspill.  That pumping may have an effect, but there is nothing to indicate that it was essential for the flood management on the Levels.

Furthermore, it is wrong to say that the entire ROF pumping system was abandoned. At the western end of the Huntspill, there is a working pumping system called the Gold Corner Pumping Station (pictured top). It was originally part of the ROF system, pumping water into the Huntspill River to keep it supplied.
Now it is operated by the Environment Agency, and it is very much a major part of the flood control system. It still moves a massive amount of water into the Huntspill, where it discharges to the sea by gravity, though a sluice. 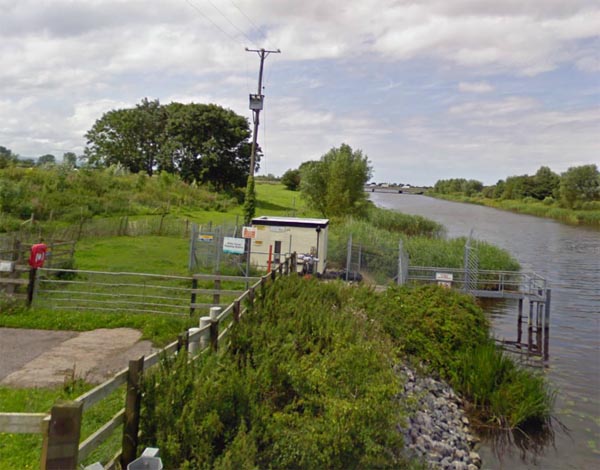 There are also EA-operated pumping stations at Withy Drove (illustrated) and Sloway Lane. Both are relatively new, each comprising two electrically-driven submersible pumps, controlled by time clocks. They are described as "water level management structures", used to control the level of the Huntspill.
The functions of these pumps is not entirely clear, but the local system is self-evidently successful enough as the land in this particular area has not been flooded this time round.

Sadly, therefore, the original story - as told by CJG - doesn't hold water, so to speak. It would have been nice if it had been better explained, adding to our knowledge. It would also have helped if the verification work had been done before initial publication, with additional clarification where necessary, thus avoiding wasting people's time.
Above all else, this flooding was far more than incompetence. Even CJG states that, during the last meeting he and his colleagues attended with the Environment Agency, "we left thinking that the 'plan' was for the Levels to return to tidal wasteland".

"It was never articulated as such", he writes, "but we felt we were not privy to a greater plan for the area, if you can understand what I mean, a sort of 'Yeah, don't worry, it won't matter' sort of attitude".

The flooding is a complex issue - an amalgam of the technical and the political. To address it solely at either level will never explain what went on. And, whatever the temptation, the issue does not lend itself to piling in without doing the homework. We had a pretty good idea already of what had gone wrong on the Levels and, more importantly, why it had gone wrong, the essence of which is hinted at by CJG.

For people to come late to the party with their own, ill-researched ideas, is not exactly helpful.