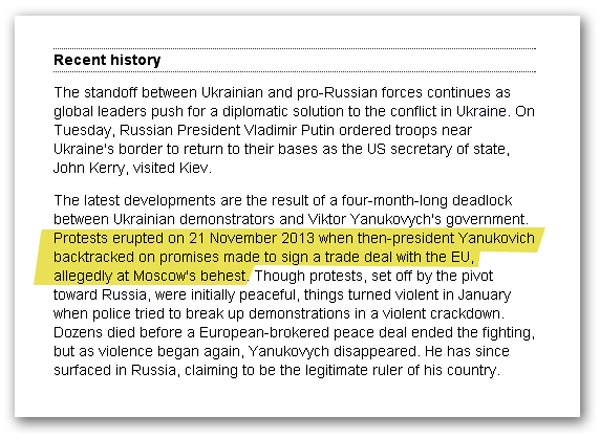 As the Ukraine crisis develops, those readers who feel they need to remind themselves of how and why it started can always refer to a handy guide in The Guardian.

There, one finds that "latest developments are the result of a four-month-long deadlock between Ukrainian demonstrators and Viktor Yanukovych's government". We are then told that, "Protests erupted on 21 November 2013 when then-president Yanukovich backtracked on promises made to sign a trade deal with the EU, allegedly at Moscow's behest".

If that is the level of information being pumped out by the BBC's favourite newspaper, and it at all represents the general understanding of the situation, then it is hardly surprising that the media and the politicians are getting it so wrong.

The EU's longstanding interference in Ukraine, though, represents only the tip of the iceberg as far as its meddling goes. As well as Georgia, we also see an interesting article from Spiegel about EU interference in Moldova, where it is very clear that the same game is afoot.

Go back a little, to December 2011, and you can see the game the EU was playing with its Association Agreement. The aim was, it said, "to accelerate the deepening of political and economic relations between Ukraine and the EU, as well as Ukraine's gradual integration in the EU Internal Market including by setting up a deep and comprehensive free trade area (DCFTA)".

The Agreement was a "concrete way to exploit the dynamics in EU-Ukraine relations, focusing on support to core reforms, on economic recovery and growth, governance and sector co-operation". It was also seen as "a reform agenda for Ukraine, around which all Ukraine's partners can align themselves and focus their assistance".

Thus the EU saw itself as the spearhead around which western penetration could be organised, including US aid.

But this was always much more than a series of isolated association agreements with individual countries. It was very much part of a concerted programme to detach Russia from its allies, under a programme called the "Eastern Partnership policy", encompassing Armenia, Azerbaijan, Belarus, Georgia, Moldova and Ukraine.

Launched in 2009, the Partnership is regarded as a "key objective of EU foreign policy" and, according to Barroso, speaking in Baku State University in Azerbaijan in January 2011, the the framework focused on four specific areas.

The first was "deepening bilateral relations through new, bilateral Association agreements". These agreements were meant to bring cooperation "to a higher level", by intensifying our joint work in a broad range of areas, including such areas as energy, environment and education.

Second, there was the prospect of strengthening trade and investment by establishing deep and comprehensive free trade areas. This was regarded as "very ambitious" as it implies the gradual opening of the EU's Internal Market to the partners.

Third, "promoting mobility of citizens and visa liberalisation" was a long-term goal. It was thought to be an important objective of the Eastern Partnership, " of great value", as greater mobility would increase direct contacts among people.

The fourth and final focus of the Eastern Partnership is then to "strengthen energy security through cooperation to ensure long-term stable and secure energy supply and transit".

No one with the slightest understanding of the relationships between Russia and its near-neighbours could be under the slightest illusion as to the implications of this partnership initiative, and the eventual intentions of the EU.

But, is all the likes of the Guardian can see  or is prepared to admit  is a "trade agreement", then the current response of Russia to a decade or more of provocation will, perforce, we seen in a completely different light.

One can only wonder though whether disguising this provocation is being done deliberately, or is simply a consequence of the more usual incompetence displayed by the fourth estate.