Ukraine: they catch up - eventually 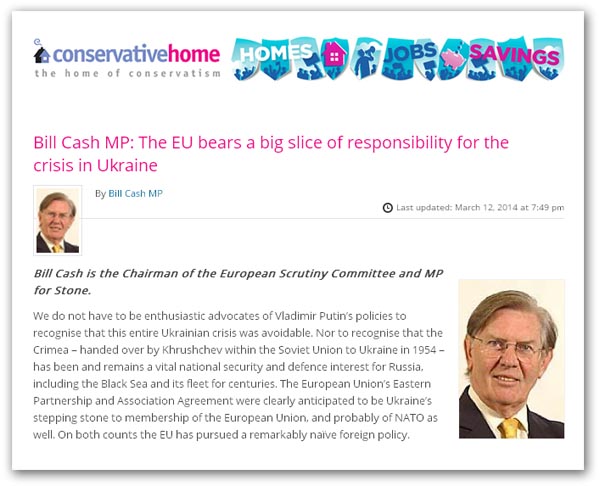 We do not have to be enthusiastic advocates of Vladimir Putin's policies to recognise that this entire Ukrainian crisis was avoidable, writes Bill Cash, in Conservative Home. He continues:

Nor to recognise that the Crimea  handed over by Khrushchev within the Soviet Union to Ukraine in 1954  has been and remains a vital national security and defence interest for Russia, including the Black Sea and its fleet for centuries. The European Union's Eastern Partnership and Association Agreement were clearly anticipated to be Ukraines stepping stone to membership of the European Union, and probably of NATO as well. On both counts the EU has pursued a remarkably naïve foreign policy.

There has undoubtedly been fault on both sides, and the best thing is to be realistic. Ukraine itself is said to be in such financiall [sic] turmoil that it would require a bailout of something of the order of $35 billion over the next two years  much of which would presumably fall on British taxpayers. But the original fault lies with the EU and the way in which it has gone about all this.

One cannot fault the sentiments here, but cannot avoid the comment that it has taken long enough. We were observing as much in late February and hadn't been rushing into print.

But what is emerging is the degree to which the EU has been meddling in the internal politics of Ukraine, not least through the sinister-sounding "Eastern Partnership Civil Society Forum". Rampantly pro-EU, the Ukraine "national platform" was established on 29 January 2011 at its founding conference in Kiev.
This organisation has provided an open site for a multiplicity of NGOs, specifically directed at "discussions, consultations, information activities in the implementation framework of the Eastern Partnership policy". Components of this Forum have been funded by the EU, and by other agencies, including funding from the Swedish government.

The extent of funding to the Eastern Partnership is colossal. Between 2011 and 2013, just EU spending on Ukraine was 389 million with 13,524,357 given to single beneficiaries in 2012. As much again was given to multiple recipients. But even more sinister is the way money was parcelled out to NGOs in relatively small packages, making a little go a long way.

Thus we have the Agency for Legislative Initiatives Citizens Association, getting 158,986; the All-Ukrainian Environmental NGO Mama-86, getting 194,942; the All-Ukrainian Non Governmental Organization Committee of Voters of Ukraine (CVU) with 245,350, the Centre for European Initiatives Civic Organisation (CEI) getting 101,180, the Charitable Foundation Democratic Initiatives (DIF) walking away with 54,918 and the All-Crimean Association of Voters for Civil Peace and Interethnic Harmony (CRPO) getting 20,304.

These and hundreds of other organisations have their noses in the EU trough, all dedicated, as the Civil Society Forum website openly admits, to bringing Ukraine "closer to the EU both politically and economically".

As with Bill Cash, we do not have to be enthusiastic advocates of Vladimir Putin's policies to note that this degree of intervention, to such an invasive level within Ukrainian society, cannot have calmed the Kremlin fears of an EU take-over, especially with the EU emphasis on NGOs.

The EU was blundering into a situation with all the fineness of a ballet dancer in size 12 boots. It was unsurprising that Russia reacted.  Regardless of the intentions - many of them entirely honourable - it would have seen direct assistance to non-state groups as subversive, and feared the worst.

The warning signs were there in August 2013, yet the EU continued regardless. A more sensitive approach could hardly have lost anything and may have averted this current crisis.