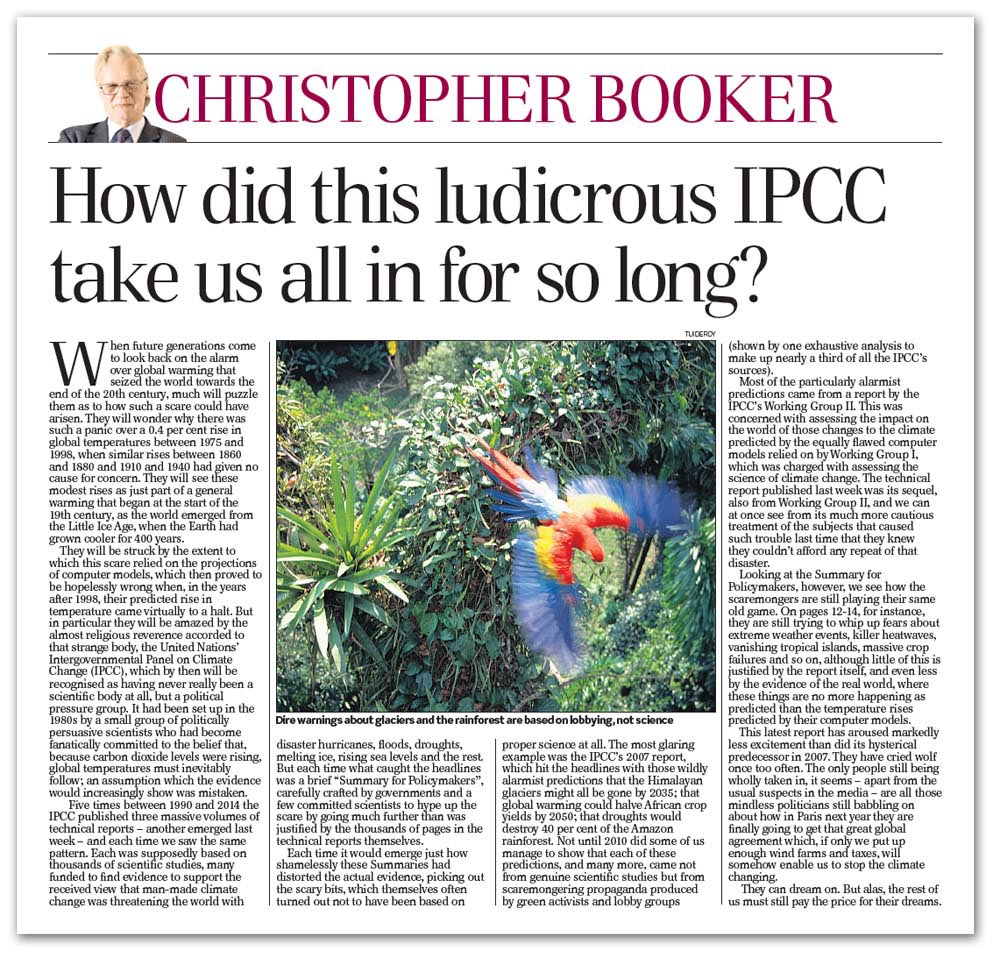 The one thing about climate warmists is that their messages (and arguments) are so repetitive, so over-the-top and (especially) so tedious that most ordinary people have switched off. The warmists are pushing a huge boulder up a hill, the boulder is getting bigger and the hill is getting steeper – and Booker is spreading some grease in their paths.

When future generations come to look back on the alarm over global warming that seized the world towards the end of the 20th century, he writes much will puzzle them as to how such a scare could have arisen.

They will wonder why there was such a panic over a 0.4 percent rise in global temperatures between 1975 and 1998, when similar rises between 1860 and 1880 and 1910 and 1940 had given no cause for concern. They will see these modest rises as just part of a general warming that began at the start of the 19th century, as the world emerged from the Little Ice Age, when the Earth had grown cooler for 400 years.

They will be struck by the extent to which this scare relied on the projections of computer models, which then proved to be hopelessly wrong when, in the years after 1998, their predicted rise in temperature came virtually to a halt.

But in particular, Booker adds, they will be amazed by the almost religious reverence accorded to that strange body, the United Nations’ Intergovernmental Panel on Climate Change (IPCC), which by then will be recognised as having never really been a scientific body at all, but a political pressure group.

It had been set up in the 1980s by a small band of politically persuasive scientists who had become fanatically committed to the belief that, because carbon dioxide levels were rising, global temperatures must inevitably follow; an assumption that the evidence would increasingly show was mistaken.

Five times between 1990 and 2014 the IPCC published three massive volumes of technical reports – another emerged last week – and each time we saw the same pattern.

Each was supposedly based on thousands of scientific studies, many funded to find evidence to support the received view that man-made climate change was threatening the world with disaster – hurricanes, floods, droughts, melting ice, rising sea levels and the rest.

But each time what caught the headlines was a brief "Summary for Policymakers", carefully crafted by governments and a few committed scientists to hype up the scare by going much further than was justified by the thousands of pages in the technical reports themselves.

Each time it would emerge just how shamelessly these Summaries had distorted the actual evidence, picking out the scary bits, which themselves often turned out not to have been based on proper science at all.

The most glaring example was the IPCC's 2007 report, which hit the headlines with those wildly alarmist predictions that the Himalayan glaciers might all be gone by 2035; that global warming could halve African crop yields by 2050; that droughts would destroy 40 per cent of the Amazon rainforest.

Not until 2010 did some of us manage to show that each of these predictions, and many more, came not from genuine scientific studies but from scaremongering propaganda produced by green activists and lobby groups (shown by one exhaustive analysis to make up nearly a third of all the IPCC's sources).

The technical report published last week was its sequel, also from Working Group II, and we can at once see, from its much more cautious treatment of the subjects that caused such trouble last time, that they knew they couldn’t afford any repeat of that disaster.

Looking at the Summary for Policymakers, however, we see how the scaremongers are still playing their same old game.

On pages 12-14, for instance, they are still trying to whip up fears about extreme weather events, killer heatwaves, vanishing tropical islands, massive crop failures and so on, although little of this is justified by the report itself, and even less by the evidence of the real world, where these things are no more happening as predicted than the temperature rises predicted by their computer models.

This latest report has aroused markedly less excitement than did its hysterical predecessor in 2007. They have cried wolf once too often.
The only people still being wholly taken in, it seems – apart from the usual suspects in the media – are all those mindless politicians still babbling on about how in Paris next year they are finally going to get that great global agreement which, if only we put up enough wind farms and taxes, will somehow enable us to stop the climate changing.

They can dream on, concludes Booker. But alas, he says, the rest of us must still pay the price for their dreams. Until, of course, that boulder gets too big and starts sliding down the hill.