Brexit: this is why it matters 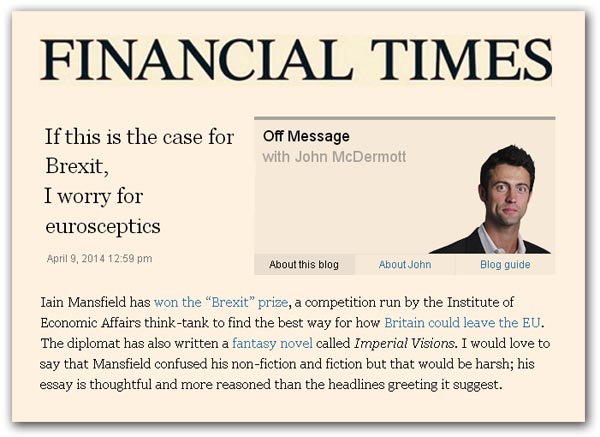 We were expecting this, or something like it. With the IEA judging panel throwing the door wide open, the Europhiles were always going to pile in and make hay. This one is John McDermott, one of the first to exploit the IEA stupidity in awarding the Brexit prize to Iain Mansfield. Never one to look a gift horse in the mouth, he observes: "If this is the case for Brexit, I worry for eurosceptics".

I worry too, a great deal, perhaps too much. But with the IEA "on side", we've got a lot to worry about. Nevertheless, McDermott starts in with an easy lob, noting that Mansfield has also written a fantasy novel called Imperial Visions. With a little restraint and a dash of irony, he says, "I would love to say that Mansfield confused his non-fiction and fiction". That would be "harsh", he adds. His essay "is thoughtful and more reasoned than the headlines greeting it suggest".

Mansfield is suggesting that we have a mix of bilateral and other multilateral trade deals, and this lets McDermott in to pick up his conclusions that, "overall, the UK would probably be neither significantly richer nor poorer".  That leaves us, separately, to observe that if this wondrous state was actually possible, with what amounts to a fantasy world, half-in, half-out Single Market option - in the Single Market but not ruled by the Single Market, so to speak - then that would be the case.

Fortunately, McDermott hasn't cottoned on to the fact that what Mansfield is proposing is impossible. But then he is only a Europhile and the breed doesn't tend to be very bright, even youth officers. They do, after all, support the European Union.  We're actually ahead of the game, with a better appreciation of the situation than, at least, this Europhile. The gifted Mansfield has indeed confused his fiction with his non-fiction.

But what McDermott says is that, if this is meant to encourage advocates of Brexit, then he would hate to read the opposing case. This is what passes for rhetoric in the land of Europhilia, one assumes, but it's good enough for the moment.
The point McDermott wishes to make shines through: if the UK is to go to the huge and unremitting effort of unravelling and retying its economic ties, then it should at least do so on the basis that these negotiations were likely to be successful and the outcome beneficial. What is dismissively terms as Mansfield's "essay" - for it is little more than that - does not convincingly suggest that either or these will be the case.

Being a Europhile, he misses the point of course. But that is what Europhiles do.  That is, presumably, why they are Europhiles. The purpose of leaving the EU isn't economic, even if the lame hearts in the IEA can only manage that idea, having long since been able to cope with two ideas simultaneously. It is, or so we are led to believe.to re-assert [some] some control over our governance.
If we step back from this and look at our Flexcit plan, the thing that the IEA had in the toilet to provide relief for its gilded guests, you will find that we sought to make that economically neutral. There isn't a best case. There isn't a worst case. There is simply neutrality.
If neutrality is possible in the short term, then that objective is good enough. The only thing is, Mansfield can't deliver that. In fact, he can't deliver anything, which is possibly why his "essay" was so attractive to the IEA and the former youth officer. His ideas of separation wouldn't work, can't work. So we would end up with the Europhiles's wet dream – a disaster.
To help him make his case, though, McDermott seeks support the FT's trade correspondent, Shawn Donnan. Shawn says that that successful separation would not happen. We agree. Of course we agree. The Mansfield idea is advanced Muppetry. You have to go for EFTA/EEA. There is no other realistic option.

The idea that Britain could replace the single market by "forging", "deepening" or "cultivating" trade links elsewhere is a core belief of those advocating Brexit, says McDermott. Even he can work it out, and he's a Europhile. Do the Americans call them Eurofiles?
Mansfield is prepared to lose some trade from Europe and gain it elsewhere. Already, I've fallen off my trolley, because that plan will lose us the referendum. It'll never happen.  But it was good enough for Lawson, father of Nigella - and Black Wedenesday, the man who thought ERM was returning to the gold standard.

What McDermott says, though, assuming Mansfield's fantasy nightmare starts to happen, is that it constitutes a policy in the same way that eliminating poverty" constitutes a policy. It confuses outcome and input. Actually, civil servants are very good at doing that. This is because they work for stupid politicians who are easily confused and can be palmed off, one with the other.
With that, we are supposed to accept from McDermott that belonging to the EU is not the opposite of making trade links with the rest of the world. It is, but never mind, even if we are told to believe that the UK's coalition government has been busy pursuing its new mercantilism while being a member of the EU.

Nevertheless, I go with MeDermott asserting (in effect) that. Mansfield is very short on detail. He is. He makes the most wonderful sweeping statements and assumptions. He assumes, for instance, that as we lose trade from the EU - because we will - we will also forge new free trade agreements with non-European countries. The wish becomes the promise. We will get extra trade because we must, otherwise the plan doesn't work.  That is as far as it goes.
With that, Mansfield cements in his fantasy with the usual magician's sleight of hand - economic models. With these, he attempt three economic scenarios: best, worst and middle. With this magic puffery, he concluded that the possible long-term outcomes range from between -2.6 and +1.1 percent of GDP. His best estimate is of a gain of +0.1 percent.

Says McDermott in response: "Leave Europe and we might be 0.1 per cent richer by 2027!". That, he observes, is hardly a convincing slogan. Indeed it isn't, but that's only what you'll get if you're lucky. On the other hand, in my book, if we leave the EU for other reasons, and offer economic stability, that should be alright. But Mansfield can't even offer that.

This is where the trouble really starts. Unpacking Mansfield's modelling, McDermott plays around with the figures and comes up with totally different solutions. By the time your head is spinning, and you are trying to catch up with the whir of percentages, any financial advantages start to melt away. Under McDermott's fingers, doubt is sown, assumption change and figures are proved unreliable.

I don't even want to go there. Once you get stuck into the detail of figures, you've lost it. That's the political equivalent of opening Pandora's box. What we find, though, is that Mansfield has opened the box, and assumptions start peeling away.

Our FCO civil servant assumes, for instance, Ł3.75bn savings from repealing (unspecified) EU legislation, yet the domestic legislation to replace it also has a cost burden, which he does not take into account. How can he? He doesn't set out in detail what legislation will be replaced.

Then, in terms of outcomes, Mansfield offers a best case of undiminished trade access to the EU – which he knows can't happen, halving of the regulatory burden imposed by the EU on business, which he is unable to qualify, and "new agreements with major and mid-sized external trading partners including China, Brazil, Russia, Australia and India", most of which are unlikely to happen within a decade, if at all, remaining highly uncertain.

The best case, therefore, is fantasy. In the worst case, we lose all access to the single market, and the UK exporters must pay the full "most favoured nation" tariffs paid by other developed nations. Actually, the rules changed. MFN status no longer applies to developed countries. Without a trade deal, we would pay full third country tariffs - ten percent on cars, and all that. And the UK might not be able to sign new trade deals. There is nothing in the book that says other countries must sign.

Despite this, McDermott doesn't put the boot in. He doesn't need to. Rather gently, he points out how easy it is to make the case for the worst to happen, rather than the best. Furthermore, the worst would be far worse that Mansfield has estimated. He has been too generous in his estimates, says McDermott.

After reading his essay, the FT hack concludes that, if this Mansfield's paper is meant to outline the best course for UK withdrawal from the EU, the burden of proof remains with those proposing Brexit, to show that it is worth the risk.

And if it is that easy to unpick in a short newspaper article, then we really are in trouble. In Flexcit, we get economic stability, using the EFTA/EEA base then as a platform to develop a new free trade area that would have a trading performance greater than Japan.

We then have the possibility of redesigning the entire European Single Market structure, opening it out to the whole of continental Europe, talking the politics of integration out of trade – the dynamic that did so much damage in Ukraine. And then we offer an eight-point plan for the re-ordering world trade.

For instance, we deal with cross-border crime and look at "unbundling" which allows us to agree sector-specific regulatory convergence on a global scale, potentially worth hundreds of billions to the global economy, with none of the political downsides that we are getting with free trade areas such as TTIP.

And there it suddenly occurred to me what is really wrong with the Mansfield "essay".. It has no breadth, no vision. It is a leaden, pedestrian stodge of prose, proposing large risk for very little reward, with the real possibility of catastrophic failure. And that is even allowing that his plan could deliver a best case, when it can't.

Sadly, with that, what we see from McDermott is only the start. Over the next few weeks – and it's not going to take much longer than that - Mansfield's plan is going to unravel. It's so shallow you don't even have to take your shoes and socks off to paddle in it. In months, it's going to be completely demolished. There will only be scattered wreckage - nothing of any salvageable value.

That's what the IEA and the Lord Lawson and his panel have got for their 100,000 euros: the price of selling out the eurosceptic community.  Fortunately, there are still some oiks left in the engine room. They are shovelling in coal - smokeless, of course - while their betters party on deck. But for them, we would be back where we started.