Brexit: the march of the obsessives 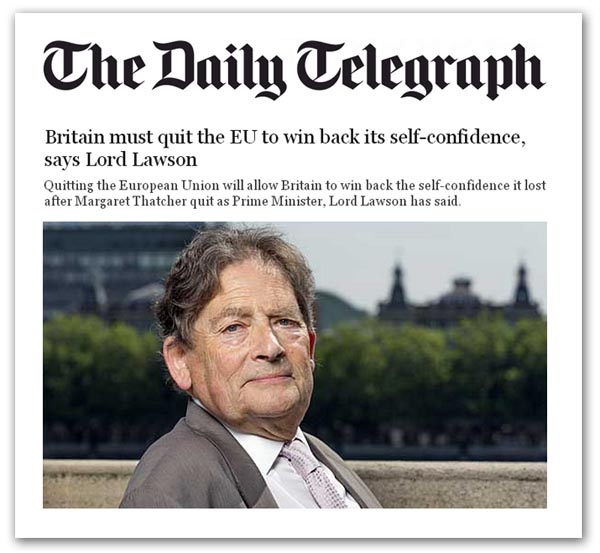 Yesterday, the lead news on most of the legacy media was about the sacking of a football club manager, marking probably a new low in the trivialisation of the media agenda. There is no way that I will accept that this item was more important than any other event, anywhere in the world.

For some though, the second item was UKIP, with its "racist posters", branded by one commentator as "worse than the BNP" but, in other respects lacking even the conviction and intellectual honesty of BNP.

In that vein, the glaring omission in the UKIP portfolio remains any serious (or any) attempt to chart our way out of the EU, leaving the only comment of the day to Lord Lawson, with the vacuous observation that leaving the EU "will allow Britain to win back the self-confidence it lost after Margaret Thatcher quit as Prime Minister".

What is so empty about this claim is that it portrays the exact reversal of the reality. In effect it is only when Britain regains its self-confidence will it have the determination to chart the complex and arduous task of withdrawing from the EU.

But then, this was the man who presided over the shambles of the rigged IEA "Brexit prize", which manifestly failed to deliver a workable or even halfway credible plan. That, perhaps illustrates precisely the problem, in that the establishment is not yet ready to entertain a serious exit plan and is content instead to play fantasy politics.

The greater irony is that UKIP, supposedly dedicated to withdrawal from the EU, has also failed to step up to the plate. But, while some of my regular ex-readers would accuse me of "obsessing" about UKIP's lacklustre performance, they fail to understand that my real obsession is with the preparation of a credible plan.

Having been working flat out, I was able to post version 05 late yesterday, some 6,000 words longer than my original IEA submission, with version six to follow in a few days. I will keep at it until we have the thing complete.

From my observations, though, the real obsessions is over the electoral fate of the Faragista cult, and the march of what we are beginning to call Ewe-kip. But, when the dust settles, our prospects for leaving the EU will depend on our ability to develop a credible plan for EU withdrawal. Yet  I see no evidence of any widespread interest in the mechanics of leaving, despite the vital nature of the issue.

And, for a population that shows such little concern for this, one wonders whether the legacy media, in making the fate of a football manager its number one story, is a far better judge of the mood of the country. But, if the nation is content to allow the media to dwell on the trivia and the superficial, it is never going to make any progress on matters of substance.

We, the obsessives, can do our stuff, but without the interest and involvement of a wider constituency, the lacklustre performance of a BNP-lite is all you're going to get. If there is no real demand for a coherent plan, the party is not going to deliver.