EU politics: he really is that ignorant 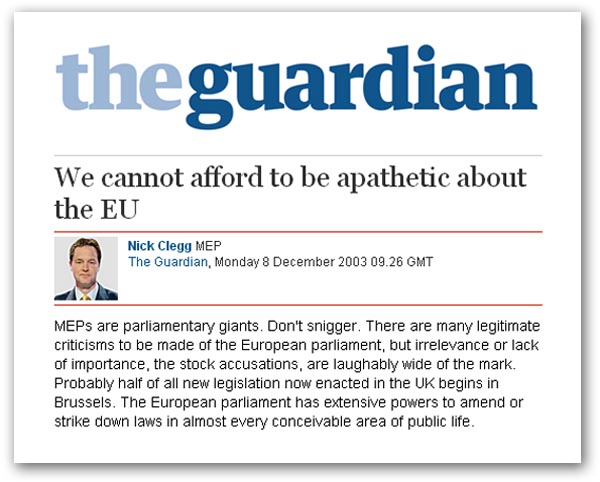 When it suited him, Clegg wanted us to believe that the EU was only responsible for seven percent of UK law. But, when he wanted to talk up the importance of the European Parliament, he told us: "Probably half of all new legislation now enacted in the UK begins in Brussels".

Definitely over-egging the pudding, he goes on to tell us: "It is no exaggeration to say that MEPs are now Europe's most influential lawmakers". Individual MEPs, he says, "exercise a degree of direct leverage over legislation unheard of in national parliamentary systems".

As to the amount of law, it looks as if Clegg was relying on the same source as the House of Commons paper which told us the British Government had estimated that "around 50 percent of UK legislation with a significant economic impact originates from EU legislation".

But even if that is an authoritative source, Mr Clegg was misleading himself and us if he believed that anything like half of all new legislation "begins in Brussels".
As regular ex-readers of this blog know, much of the law coming from Brussels does not originate there. Whether ISO standards, Codex, OIE, IPPC standards, or much else, a huge amount of law actually starts its life in Geneva, Rome or other points around the globe.

As to the "direct leverage over legislation" that the MEPs are supposed to exercise, Mr Clegg should now be aware of Art. 11 of Regulation (EU) No 182/2011. This effectively abolishes any veto the Parliament previously had over Comitology decisions – which implement law from global institutions.

The hidden march of globalisation, therefore, is effectively robbing the European Parliament of what little power the MEPs ever had. But it is a process of which Mr Clegg is almost completely oblivious.

But then, even if MEPs as a group had any power, this can hardly apply to the UK contingent. In the next parliament, there will be 73 UK MEPs. These will represent a mere 9.7 percent of the 751 elected MEPs. Given the party splits, this level of representation is notional. UK MEPs rarely vote together as a single bloc. But even if they did, they could never muster the 376 votes needed for a majority.

The irony is, of course, that even if UKIP swept the board at the euros, they would still only hold 9.7 percent of the votes. And then, with anything of importance coming through, the Commission could exercise its powers under Article 11 to overrule the Parliament, in the unlikely event that anything happened that it didn't like.

But there is a double irony here. As we also know, the Commission is undergoing a process under its "REFIT" programme, of scrapping huge tranches of EU law in order to replace it with international law, mandated by Art 2.4 of the WTO TBT. In effect, the Commission isn't in control of the legislative agenda either.

All of this, though, simply passes by the likes of Clegg. Ignorance, it seems, is almost a pre-requisite for government. Only if you really know nothing about the way government works can you possibly survive in the modern environment. Clegg was obviously ideally suited for his job in 2003 and is even better suited for it now.