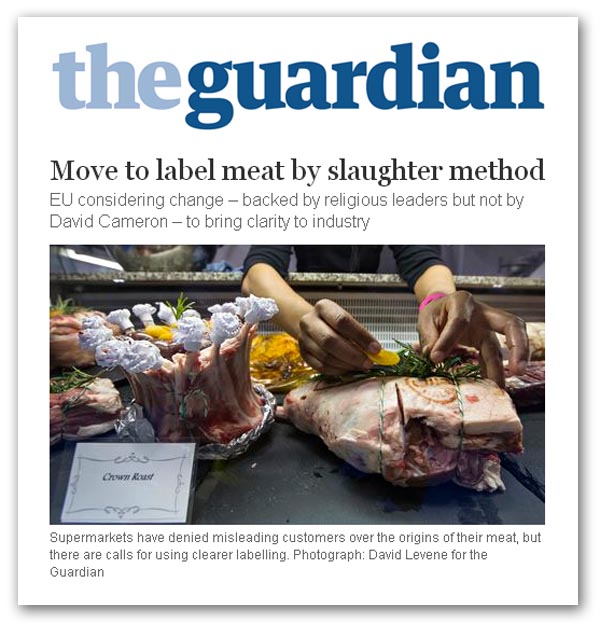 In the midst of the ongoing controversy about the labelling of halal meat, only the Guardian seems to have noticed that "Europe" is considering whether meat should be labelled with information about how the animal was slaughtered.
Labelling has become a high profile issue after it had been revealed that Pizza Express, KFC and Subway were selling halal meat without telling their customers. But the idea that meat should be labelled in this manner has been rejected by supermarkets, while the prime minister has told the industry to sort itself out, stating that he will order a review unless the industry delivers greater transparency.

What no one seems to have realised, however, is that food labelling is an exclusive EU competence, controlled by Regulation (EU) No 1169/2011. And, as per Recital 50, the European Commission has for some time been planning a study "on the opportunity to provide consumers with the relevant information on the stunning of animals". This is in "the context of a future Union strategy for the protection and welfare of animals".

As of May last year, the Commission acknowledged that that there was an "upcoming study", investigating the possibility of "harmonised labelling of the stunning of animals". So far, though, there has been no report published (see pages 30-31).

Until the Commission has reported, and decided whether to legislate, making regulation on this form of labelling an "occupied field", the UK government is not in a position to take any formal action without explicit permission from the Commission.

One of these days, we might possibly get to the point where MPs actually start earning their salaries and expenses, learning something about the way their government works. That way, they might stop making complete fools of themselves, calling for something that Parliament has no powers to require.

As to the appearance of the Commission report, presumably Mr Cameron is hoping that, by the time he is forced to order his own review - if that becomes necessary - the Commission will have reported. By then, I should imagine, he will be banking on the controversy having died down, getting him off the hook.
The irony is that, the more this subject is explored, the more anomalies that are going to show up, making the situation even worse. For instance, while halal is in the frame, animals for kosher meat are also killed without stunning, and the trade here could show up some problems.

For instance, for religious reasons, only forequarter beef is sold on the kosher market. Hinds are released for gentiles to consume. Thus, for many years, supermarkets have been selling tons of steak from animals that have been killed according to Jewish ritual - without, our course, informing unwitting consumers.

Ritual slaughter, therefore, is a can of worms that no one really wants to open. There are issues here that do not stand up to close examination. One can see why the Commission is being so slow to report, but Mr Cameron won't want to be any faster to the draw.