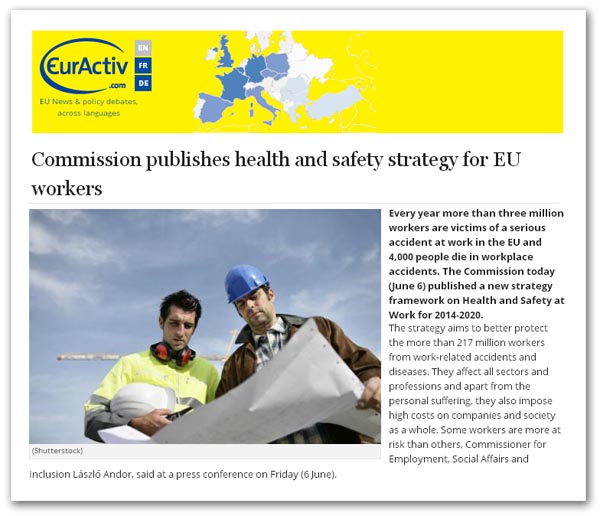 Delving deep into the realms of advanced nerdery, we saw yesterday the ever-useful EurActiv tell us of the launch of the Commission's "Strategic Framework on Health and Safety at Work" for 2014-2020.

For that vanishingly small group of individuals interested in such things, the full document is here. And while, in the normal course of events, this is not the sort of thing that would have us rushing to the barricades, perhaps it should. In this document, a very major line is in the process of being crossed.

Fully to understand this, we need to go back to the very basics of what the "common market" was supposed to be about – the harmonisation of disparate sets of legislation to produce a common body of law. That way, as it stands now, exporters and importers just have one set of rules to deal with, instead of – potentially – 28 sets of rules from as many countries.

This, however, is not just a question of administrative simplicity. It also encompasses the principle of "equality of misery", whereby each member state suffers the same regulatory burden and no one country enjoys a competitive advantage over the other, by taking short-cuts in regulatory standards. Therein lies the philosophy of the "level playing field".

There are, as one might imagine, a number of flaws in this, not least that it rules out the idea of regulatory competition, whereby one member state gains an advantage through the implementation of more efficient or effective regulation, delivering results at lower costs that its trading partners.

But, what must not be forgotten about regulation is it requires enforcement and, as we have observed previously, the overall effect of the law depends as much, if not more, on the resources afforded to enforcement, and the skill and tenacity of the enforcers. With no enforcement, many laws might just as well not exist.

If many legislators have difficulty in understanding this, not so the European Commission – and its partner in crime, the European Agency for Safety and Health at Work (EU-OSHA). In this current strategy, they recognise that one of the "key challenges" in making the law work is "improving the implementation record of Member States".

The importance of this can hardly be over-emphasised. While there is some limited loss of sovereignty involved in harmonising laws, as we begin to see the process of global convergence, with standardisation of technical laws at a global level, there is no great drama. Mostly (although not always), we end up with very similar law to that which we would have adopted anyway.

But once the law-making body steps over the line, we move from co-ordination and co-operation into governance, the implementing body taking on more and more characteristics of a hand-on governmental body. And this really is something we cannot live with.

Furthermore, this is especially the case with health and safety at work. In the UK, we went through the transformative process of the Robens Committee, which sought to change the regulatory philosophy from one of extensive lists of proscriptive regulations, to one of imposing general duties on employers (and employees) to maintain a safe environment. At a stroke, thousands of laws – in theory – could be replaced by a few sections of the new Health and Safety at Work Act 1974.

Unfortunately, this liberal and far-sighted approach foundered on the altar of proscriptive EU regulation, bringing us such delights as RIDDOR, REACH and the infamous "six pack". Not for nothing when Booker and I started writing about "red-tape follies" and "mad officials", health and safety featured prominently in our narrative.

But now, without the British legacy media even noticing, we are about to cede even greater sovereignty, as we get further and further enmeshed in the EU's regulatory system. Interestingly, as EurActiv indicates from its report, which has Józef Niemiec, deputy general secretary of the European Trade Union Confederation (ETUC), complaining of the absence of new laws in the framework strategy, even people at the coal face don't really understand what is going on.

There is, however, nothing which so quintessentially represents the face of government than in having "the inspector call". When the "inspector" answers to Brussels rather than Westminster, we have lost more power than we can begin to imagine.

Never has it been more urgent that we should arrange our departure from the European Union, before we are so enmeshed that it becomes virtually impossible to extract ourselves.