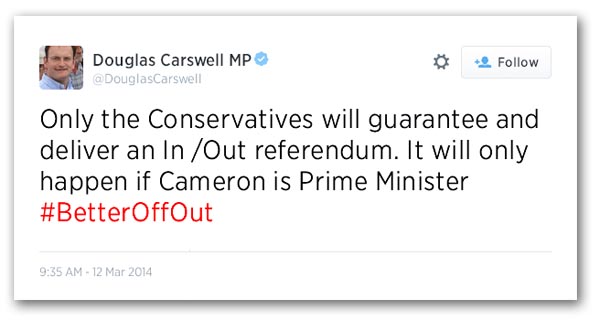 While the Mail is celebrating Douglas Carswell's defection as "brilliantly stage-managed political theatre", an alternative scenario is beginning to do the rounds.

Far from his "defection" being a principled stand of a eurosceptic MP, frustrated by David Cameron's lack of commitment to his cause, Conservative sources are claiming that he resigned in a fit of pique after being slighted by Conservative Central Office over hotel accommodation during the annual conference.

If this sounds all too trivial, those close to Carswell acknowledge that he is something of a drama queen, prone to storming out of meetings when he feels he is not getting his way. For him to decide to resign on the spur of the moment is entirely in character.

This would also explain the unlikely success of the publicity coup, in keeping it secret right up to the moment his defection was announced. So spur-of-the moment was his resignation, that not even Carswell himself knew of it shortly before the hastily arranged press conference. There had been no time for leakage.

Why this has slightly more plausibilty than anything we have be told so far, is that Carswell's reasons for defecting still doesn't stack up. As we see from his Twitter account, on 12 March (above), he was telling us: "Only the Conservatives will guarantee and deliver an In /Out referendum. It will only happen if Cameron is Prime Minister".

And for those who might have missed this happy thought, on 15 April Mr Carswell was articulating the same idea, writing in his Telegraph blog: "In order to exit the EU, we need David Cameron to be Prime Minister in 2017 – the year when we will get the In/Out referendum, our chance to vote to leave the EU".

The point is that, four months later, nothing has changed. Mr Cameron's commitment to a referendum is exactly the same now as it was then. If Mr Carswell believed back in March and then April that we need Mr Cameron in 2017 as prime minister in order to get a referendum then, at this particular juncture, he has no reason to believe otherwise.

At least, Carswell is no longer an MP. Today, the Chancellor of the Exchequer appointed him to be Steward and Bailiff of the Manor of Northstead, one of the formal mechanisms by which MPs are removed from office.

Traditionally, a by-election is held within three months of a seat becoming vacant, although there is nothing in the rules that requires this to be the case. The seat could be left vacant until the general election. Senior Conservatives, however, believe that Mr Cameron would be unwise to duck a contest, for fear of being accused of running scared.

With a short, sharp but costly election campaign in prospect, Carswell is expecting his expenses to be defrayed by former Tory donor, Stuart Wheeler, which makes a change from the taxpayer having to pick up the tab, although the cost of a by-election is variously estimated to cost between Ł80,000-200,000.

Meanwhile, there has been speculation in the Mail and the Mirror as to whether other Conservative MPs will follow Carswell. Named suspects (mostly) have denied any intention to defect.

Former political colleague, Daniel Hannan, has his own "take", writing an enigmatic blogpost. He predicts that the constituency will be Carswell's "for as long as he wants it", asserting that "his brand of optimistic, localist, forward-looking euroscepticism is hugely popular".

Says Hannan: "It could sweep the country at a general election, and propel Britain to global prosperity – if only the Conservatives and UKIP could overcome their animosities", to which he adds "No further comment". He might instead have written: "no chance".

In his reference to overcoming animosities, there is a hint of a possible rapprochement, but one which is entirely unrealistic. Carswell is not likely to become a bridge between the two parties, nor any sort of ambassador. In fact, he has set his bridges ablaze.