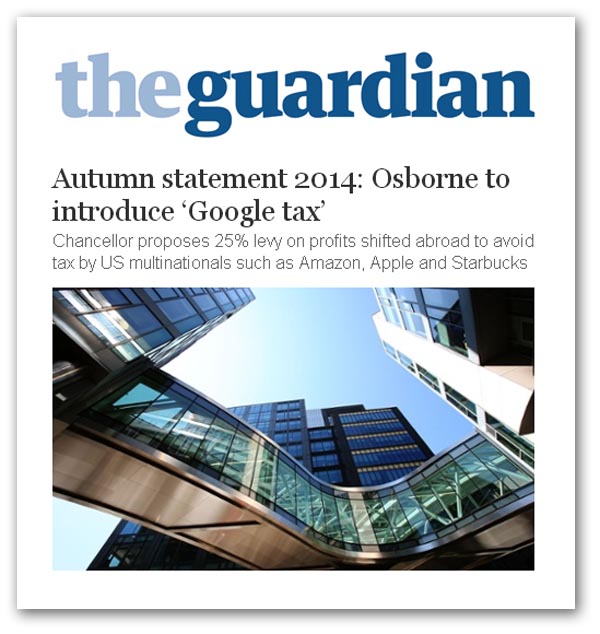 The "stand-out surprise measure" in the autumn statement yesterday was the so-called "Diverted Profits Tax", a new 25 percent levy on tax-avoiding multinationals, which was immediately dubbed the "Google Tax".

The issue of multinational tax evasion came top a head last year when the Public Accounts Committee hammered the "deeply unconvincing" argument that Google's UK sales took place in Ireland, where they were actually submitted for taxation.

It was then, in June, that the PAC declared that, "HM Treasury needs to take a leading role in driving international action to update tax laws and combat tax avoidance", giving a clue to what was really going on.

One certainly didn't get any clues the Chancellor, who spoke of the evasion and proudly told the House, "Today we're putting a stop to it", as if somehow he was in control. "We will make sure that big multinational businesses pay their fair share".

On the face of it, George Osborne had limited options, as any clampdown potentially contravenes the fundamental treaty provisions of free movement of capital. Thus, we are not talking of independent decision-making.

In fact, though, the EU is not in the frame. The key players, as we remarked in November last year are G20 and UNCTAD (United Nations Conference on Trade and Development) which, in July last year, led to the publication of an "Action Plan on Base Erosion and Profit Shifting " and then to the 2014 statement on "deliverables".

This had the European Commission publishing COM(2014) 315 in June, which has it recognising the role of the global institutions, but such is global dimension of this that even the BBC has picked up the OECD involvement. Said the BBC, the OECD group of leading economies, including the UK and Germany, were heading the drive for a global deal on the taxation of multinationals.

What is so interesting though is when the G20 met to agree the OECD plan, the November communiqué effectively has the European Council ceding authority to G20/OECD, a recognition that, when it comes to dealing with multinational businesses, global solutions are required. Even the Commission sung the praises of the OECD.

EU Tax Commissioner Algirdas emeta thought the initiatives were "an important advance in creating a fairer, more appropriate corporate tax environment worldwide". They would, he said, "thwart many of the aggressive tax practices that companies engage in today, and ensure a more level playing-field for businesses internationally".

OECD itself believes its recommendations constitute the "building blocks for an international agreed and co-ordinated response" to corporate tax planning strategies that exploit the gaps and loopholes of the current system. The aim is to stop multinationals artificially shifting profits to locations where they are subject to more favourable tax treatment.

The mechanism for this is a "single set of consensus-based international tax rules", which far transcend the EU and will be adopted at a global level. And in the House of Commons, yesterday, we saw a tiny, unacknowledged glimpse of that globalisation process. "Little Europe" just got a bit smaller.