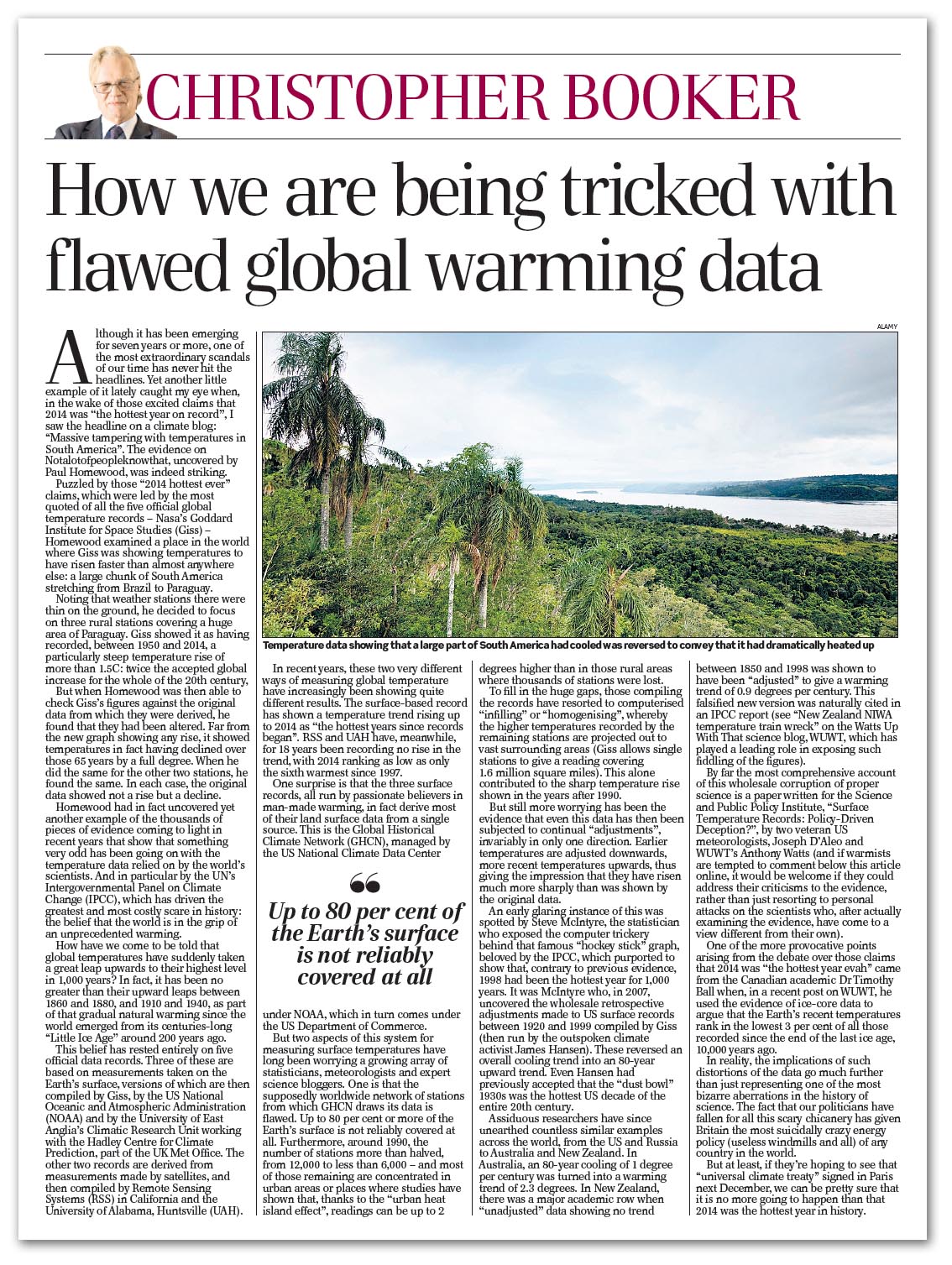 Although it has been emerging for seven years or more, one of the most extraordinary scandals of our time has never hit the headlines, writes Booker.

Yet another little example of it lately caught his eye when, in the wake of those excited claims that 2014 was "the hottest year on record", he saw the headline on a climate blog: "Massive tampering with temperatures in South America". The evidence on Notalotofpeopleknowthat, uncovered by Paul Homewood, was indeed striking.

Puzzled by those "2014 hottest ever" claims, which were led by the most quoted of all the five official global temperature records – Nasa's Goddard Institute for Space Studies (Giss) – Homewood examined a place in the world where Giss was showing temperatures to have risen faster than almost anywhere else: a large chunk of South America stretching from Brazil to Paraguay.

Noting that weather stations there were thin on the ground, he decided to focus on three rural stations covering a huge area of Paraguay. Giss showed it as having recorded, between 1950 and 2014, a particularly steep temperature rise of more than 1.5şC: twice the accepted global increase for the whole of the 20th century.

But when Homewood was then able to check Giss's figures against the original data from which they were derived, he found that they had been altered. Far from the new graph showing any rise, it showed temperatures in fact having declined over those 65 years by a full degree. When he did the same for the other two stations, he found the same. In each case, the original data showed not a rise but a decline.

Homewood had in fact uncovered yet another example of the thousands of pieces of evidence coming to light in recent years that show that something very odd has been going on with the temperature data relied on by the world's scientists. And in particular by the IPCC, which has driven the greatest and most costly scare in history: the belief that the world is in the grip of an unprecedented warming.

How have we come to be told that global temperatures have suddenly taken a great leap upwards to their highest level in 1,000 years? In fact, it has been no greater than their upward leaps between 1860 and 1880, and 1910 and 1940, as part of that gradual natural warming since the world emerged from its centuries-long "Little Ice Age" around 200 years ago.

This belief has rested entirely on five official data records. Three of these are based on measurements taken on the Earth's surface, versions of which are then compiled by Giss, by the US National Oceanic and Atmospheric Administration (NOAA) and by the University of East Anglia's Climatic Research Unit working with the Hadley Centre for Climate Prediction, part of the UK Met Office.

The other two records are derived from measurements made by satellites, and then compiled by Remote Sensing Systems (RSS) in California and the University of Alabama, Huntsville (UAH).

In recent years, these two very different ways of measuring global temperature have increasingly been showing quite different results. The surface-based record has shown a temperature trend rising up to 2014 as "the hottest years since records began". RSS and UAH have, meanwhile, for 18 years been recording no rise in the trend, with 2014 ranking as low as only the sixth warmest since 1997.

One surprise is that the three surface records, all run by passionate believers in man-made warming, in fact derive most of their land surface data from a single source. This is the Global Historical Climate Network (GHCN), managed by the US National Climate Data Center under NOAA, which in turn comes under the US Department of Commerce.

But two aspects of this system for measuring surface temperatures have long been worrying a growing array of statisticians, meteorologists and expert science bloggers. One is that the supposedly worldwide network of stations from which GHCN draws its data is flawed.

Up to 80 percent or more of the Earth's surface is not reliably covered at all. Furthermore, around 1990, the number of stations more than halved, from 12,000 to less than 6,000 – and most of those remaining are concentrated in urban areas or places where studies have shown that, thanks to the "urban heat island effect", readings can be up to two degrees higher than in those rural areas where thousands of stations were lost.

To fill in the huge gaps, those compiling the records have resorted to computerised "infilling" or "homogenising", whereby the higher temperatures recorded by the remaining stations are projected out to vast surrounding areas (Giss allows single stations to give a reading covering 1.6 million square miles). This alone contributed to the sharp temperature rise shown in the years after 1990.

But still more worrying has been the evidence that even this data has then been subjected to continual "adjustments", invariably in only one direction. Earlier temperatures are adjusted downwards, more recent temperatures upwards, thus giving the impression that they have risen much more sharply than was shown by the original data.

An early glaring instance of this was spotted by Steve McIntyre, the statistician who exposed the computer trickery behind that famous "hockey stick" graph, beloved by the IPCC, which purported to show that, contrary to previous evidence, 1998 had been the hottest year for 1,000 years.

It was McIntyre who, in 2007, uncovered the wholesale retrospective adjustments made to US surface records between 1920 and 1999 compiled by Giss (then run by the outspoken climate activist James Hansen). These reversed an overall cooling trend into an 80-year upward trend. Even Hansen had previously accepted that the "dust bowl" 1930s was the hottest US decade of the entire 20th century.

Assiduous researchers have since unearthed countless similar examples across the world, from the US and Russia to Australia and New Zealand. In Australia, an 80-year cooling of one degree per century was turned into a warming trend of 2.3 degrees.
,br> In New Zealand, there was a major academic row when "unadjusted" data showing no trend between 1850 and 1998 was shown to have been "adjusted" to give a warming trend of 0.9 degrees per century. This falsified new version was naturally cited in an IPCC report.

By far the most comprehensive account of this wholesale corruption of proper science is a paper written for the Science and Public Policy Institute, " Surface Temperature Records: Policy-Driven Deception?", by two veteran US meteorologists, Joseph D'Aleo and WUWT's Anthony Watts.

One of the more provocative points arising from the debate over those claims that 2014 was "the hottest year evah" came from the Canadian academic Dr Timothy Ball when, in a recent post on WUWT, he used the evidence of ice-core data to argue that the Earth's recent temperatures rank in the lowest three percent of all those recorded since the end of the last ice age, 10,000 years ago.

In reality, the implications of such distortions of the data go much further than just representing one of the most bizarre aberrations in the history of science. The fact that our politicians have fallen for all this scary chicanery has given Britain the most suicidally crazy energy policy (useless windmills and all) of any country in the world.

But at least, if they're hoping to see that "universal climate treaty" signed in Paris next December, we can be pretty sure that it is no more going to happen than that 2014 was the hottest year in history.