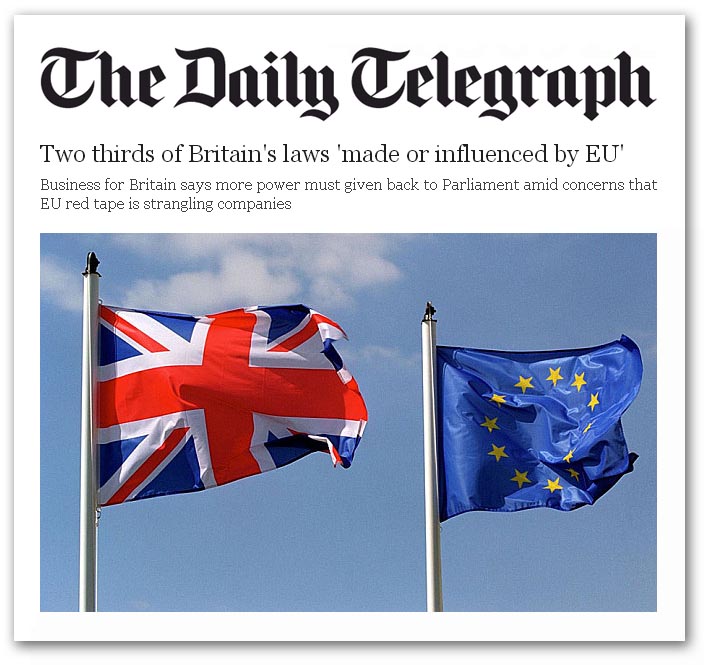 Published yesterday by Business for Britain is a piece of work that purports to settle the question of how much UK law is "made in Brussels"  and which gets it spectacularly wrong.

In the first of its many errors, the think-tank selects the arbitrary period of 1993 to 2014, a total of 22 years, as the basis for its comparison. But the UK has been making laws for centuries, and the EU (in all its previous forms, including the Coal and Steel Community) has been making laws for over 60 years. This means that BfB is providing only a limited and partial snapshot, not a complete picture.

Secondly, it makes the mistake of taking the number of EU regulations and directives promulgated, year-by-year, and adding them together to furnish a total of 49,699 for the 22-year period. What is not realised is that much EU regulation is short-lived. A huge amount  for instance most of that relating to the CAP  applies only for the year to which it relates. These regulations then lapse and are replaced by the next tranche.

The measure, therefore, cannot use the total number of regulations promulgated. It has to use the number in force at any one time. The basis of BfB's estimation is fundamentally and irrevocably flawed.

In fact, many of the regulations are transposed into UK law. They have to be in order to build them into an enforcement and penalty framework, and sometimes in order to link provisions to other instruments, some UK generated. Some even implement non-EU treaty or technical packages.

Thus, at two levels the Elliott figure is wrong. It vastly over-estimates the amount of regulation and then it double counts some (an unknown) number of regulations. These errors further invalidate any calculations.

Fourthly, for some unknown reason, the think tank under-records the amount of UK legislation passed. In 2013, for instance, Business for Britain records 1,234 Acts and Statutory Instrument, yet the government website gives us 3,004. For 2012, BfE has 1,146. The official figure is 3,025.

Thus, given the massive errors, the headline figure of 64.7 percent (including directives) offered by Business for Britain as the proportion of UK law "made or influenced" by the EU is worthless. It has no merit whatsoever.

Furthermore, even attempting to assess the degree of penetration of EU law is futile. Making numerical assessments is comparing chalk and cheese. For instance, of the UK Statutory Instruments produced in a typical year, a huge majority are road traffic orders or administrative instruments of a purely technical nature, with no equivalents in EU law. By way of illustration, the UK legislative database reveals the:
Illustrative of the type of traffic orders issued, there are the:
On the EU front, there can hardly be any equivalence with, for instance:
All that can basically stand are the raw figures. Roughly, there are 3,969 General Acts and 71,851 Statutory Instruments on the UK legal database, making 75,820 legislative instruments in all (2013 figures). This compares with 22,390 EU acts (directives, regulations and decisions) currently in force as of February 2015.
It is not possible to come up with an accurate percentage, one with another. For the reasons discussed, it cannot be said that EU acts represent "x percent" of the 75,820 UK laws and, even if it could, the point is meaningless. All we can say, with any validity, is that a great deal of law comes to us via the EU.

Yet even that careful phrasing tells a story. A very substantial amount of that law originates with higher bodies, from UNECE to Codex and points south. Of the 6,000 or so laws in the Single Market acquis, potentially 80 percent are of international origin. The rest of the acquis also has international input, which means that a substantial proportion of the so-called "EU laws" would remain in force even if we left the EU.

All of this, as you would imagine, is in Flexcit. Perhaps if a few more people read it, they might learn something, which means they could no longer exploit their ignorance in support of an equally ignorant media. But it might also mean that they would stop issuing distorting propaganda and get down to exploring more relevant issues.