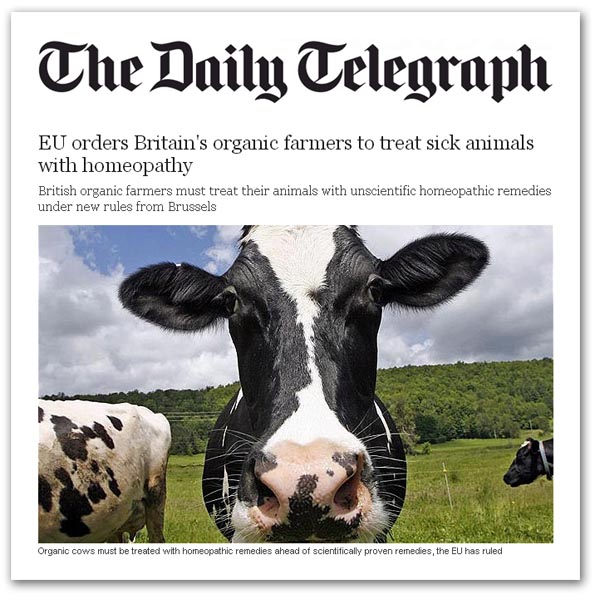 In my previous post, I pointed out that journalists lacked the intellectual architecture to understand the EU, and thus report it properly. Right on cue, in the Daily Telegraph, we get a graphic example of this from Sarah Knapton, science editor, and Richard Orange.

They offer a bizarre story which claims that British organic farmers "are being forced to treat their livestock with homeopathic remedies under new European Commission rules branded 'scientifically illiterate' by vets", with the journalist duo telling us that: "The directive states that: 'it is a general requirement…for production of all organic livestock that (herbal) and homeopathic products… shall be used in preference to chemically-synthesised allopathic veterinary treatment or antibiotics'".

This is classic "Red Tape Folly" stuff, the like of which Booker and I used to be writing for the Telegraph and the Mail more twenty years ago – with the added proviso that we used to check the facts before committing ourselves to print.

Knapton and Orange, however, have got themselves into a little bit of difficulty with this story: the "directive" doesn't actually exist. They tell us that it came into force on 1 January 2015, but it didn't. It really does not exist. There reference to it is a complete invention.

This is pointed out on the Commission website, and even then the regulation does not state what the article claims it to say. What it does say is this:

[D]isease shall be treated immediately to avoid suffering to the animal; chemically synthesised allopathic veterinary medicinal products including antibiotics may be used where necessary and under strict conditions, when the use of phytotherapeutic, homeopathic and other products is inappropriate.

This, of course, is very far from requiring homeopathy. In fact, it permits the use of conventional therapy, something which many local rules do not.

The use of veterinary medicinal products in organic farming shall comply with the following principles:

(a) Phytotherapeutic (e.g. plant extracts (excluding antibiotics), essences, etc.), homeopathic products (e.g. plant, animal or mineral substances) and trace elements and products listed in Part C, section 3 of Annex II, shall be used in preference to chemically-synthesised allopathic veterinary medicinal products or antibiotics, provided that their therapeutic effect is effective for the species of animal, and the condition for which the treatment is intended;

(b) If the use of the above products should not prove, or is unlikely to be, effective in combating illness or injury, and treatment is essential to avoid suffering or distress to the animal, chemically-synthesised allopathic veterinary medicinal products or antibiotics may be used under the responsibility of a veterinarian …

Once again, this does not force farmers to use homeopathic medicines. Merely, it lists (in Annex II) the products that should be used provided that their therapeutic effect is effective, and then goes on to say that, if they do not prove, or are unlikely to be, effective in combating illness or injury, conventional medicines may be used.

Only by taking the first part, out of context, can it be argued that there is any compulsion to use homeopathic medicines. And, if that was not bad enough, the 1991 regulations are no longer in force, having been replaced by the 2007 version.

1. Where despite preventive measures to ensure animal health as laid down in Article 14(1)(e)(i) of Regulation (EC) No 834/ 2007 animals become sick or injured they shall be treated immediately, if necessary in isolation and in suitable housing.

2. Phytotherapeutic, homoepathic products, trace elements and products listed in Annex V, part 3 and in Annex VI, part 1.1. shall be used in preference to chemically-synthesized allopathic veterinary treatment or antibiotics, provided that their therapeutic effect is effective for the species of animal, and the condition for which the treatment is intended.

3. If the use of measures referred to in paragraph 1 and 2 is not effective in combating illness or injury, and if treatment is essential to avoid suffering or distress of the animal, chemically synthesised allopathic veterinary medicinal products or antibiotics may be used under the responsibility of a veterinarian.

Seen in the context of national rules which often prohibit conventional treatment, the (intended) effect of this regulation is to permit treatment using normal veterinary medicines. Far from requiring homeopathic treatment, it actually provides the farmer with the legal justification for reverting to more effective treatment.

disease shall be treated immediately to avoid suffering to the animal; chemically synthesised allopathic veterinary medicinal products including antibiotics may be used where necessary, under strict conditions and under the responsibility of a veterinarian, when the use of phytotherapeutic, homeopathic and other products is inappropriate.

While the progress of this is stalled, it does demonstrate that, not only does the EU not require organic farmers to use homeopathic treatment, it has no intention of so doing.

The question thus arises as to why two Telegraph journalists have got it so spectacularly wrong. A clue may lie in the Mail on Sunday which last week did a story about the application of the EU organic aquaculture regulations to Norway, a story run the previous day in Dagbladet and in the Norwegian edition of The Local.

The Norwegian story itself is flawed. Apart from the fact that Norway has conformed with EU standards since the 1991 Regulations, the paper is turning a permissory provision into a mandatory requirement. All the regulations do is allow specified homeopathic treatments to be tried, prior to conventional treatment.

This narrative in no way supports the Telegraph story, although it has been copied out by The Express and now in The Sun as well, in classic examples of media coprophagia.

The real explanation for the Telegraph's fiction most likely lies in the very simple premise is that it met the journalists' expectations of what an EU story should look like. It reinforced their prejudices and kept them within their comfort zone. In effect, they believed it because they wanted to, and then sold it to their gullible readers.

They believe what they want to believe, but when it comes to trying to understand how the world really works, they're out to lunch.