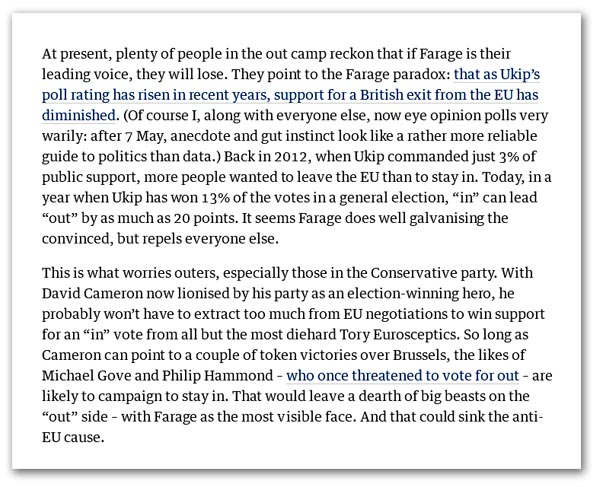 From the mouth of our enemy, Jonathan Freedland, comes a devastating analysis which is all too accurate – far too accurate for comfort. He writes:

At present, plenty of people in the out camp reckon that if Farage is their leading voice, they will lose. They point to the Farage paradox: that as Ukip's poll rating has risen in recent years, support for a British exit from the EU has diminished. Back in 2012, when Ukip commanded just 3 percent of public support, more people wanted to leave the EU than to stay in. Today, in a year when Ukip has won 13 percent of the votes in a general election, "in" can lead "out" by as much as 20 points. It seems Farage does well galvanising the convinced, but repels everyone else.

This is what worries outers, especially those in the Conservative party. With David Cameron now lionised by his party as an election-winning hero, he probably won't have to extract too much from EU negotiations to win support for an "in" vote from all but the most diehard Tory Eurosceptics. So long as Cameron can point to a couple of token victories over Brussels, the likes of Michael Gove and Philip Hammond – who once threatened to vote for out – are likely to campaign to stay in. That would leave a dearth of big beasts on the "out" side – with Farage as the most visible face. And that could sink the anti-EU cause.

The point is well-made about Farage: "It seems Farage does well galvanising the convinced, but repels everyone else". And that's the point. People either love him or hate him – the trouble is most hate him, and to win the referendum we need 51 percent of the voters.

The next point is well-made as well: David Cameron probably won't have to extract too much from EU negotiations to win support for an "in" vote.

Too many people are being far too complacent about the deal Mr Cameron can bring back from Brussels. This is the man who "vetoed" a treaty and was applauded by the media and his party. Even to this day, the legend survives.

All the signs are that the newly-anointed Prime Minister, in cahoots with the "colleagues" is capable of pulling off a theatrical "spectacular" – more than enough to unite the majority of his party, and to bring the media on-side.

This indeed will leave Farage as the lead political figure in the campaign. The few Tory "big beasts" who are still prepared to back the outers will then be linked with Farage and their continued campaigning will be political suicide – they will be isolated and marginalised – the rump of the Tory "right wing". Very few others will want to take the risk.

Freedland's analysis, therefore, points to failure – he paints a scenario that really is all too real. Farage taking a prominent part in the campaign will guarantee we lose. As Complete Bastard points out, he is a disaster - the one man who, single-handedly can lose us the referendum.

But winning the referendum must come first. Farage should stand down and we should make this a people's campaign, capitalising on the anti-politics mood. A vote for "out" then becomes a vote against all politicians – Farage included. Tragically, it was never meant to be like this. But Farage has toxified the eurosceptic brand and this is the result. Even the Guardian can see it – our enemies understand us better than we do ourselves. 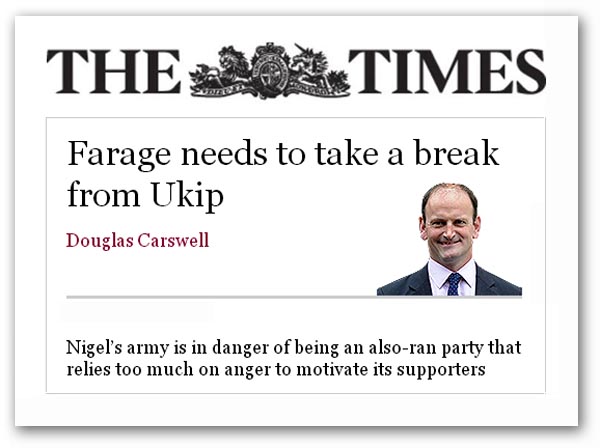 On the bright side, though, we have a late intervention from Douglas Carswell, who is telling Farage to take a break from Ukip. Politics is about persuasion, he says:

And getting noticed isn't enough to win over people. You need the right tone. At times, Ukip has failed to strike the right tone. By all means we should highlight the problem of health tourism. But we need to admit that using the example of HIV patients to make the point was ill-advised.

Ukip, Carswell observes, has been at its most persuasive when we have been most optimistic. Anger is never a great way to motivate people — at least not for very long.

"The party", he notes, "was founded to oppose Britain's membership of the European Union. Getting us out is one of the reasons for our existence. For the first time in a generation, we now have a majority of MPs in the House of Commons in favour of a referendum on our membership. Instead of sniping at the government as they prepare the legislation for the referendum, we should take heart".

Sternly, he tells his readers that, rather than automatically dismissing every idea for EU reform as necessarily bad, we should explain why we think we could do even better outside the EU.

Instead of feeding the idea that EU membership is synonymous with immigration, Ukip should help draw attention to the myriad of ways in which being run by Brussels makes us worse off. As a vital part of the coalition campaigning for "out", Ukip needs to strike the right tone. We must be part of a movement, but not seek to dominate it, he says.

Rather than focusing on the 13 percent of people who voted Ukip at the last election, the "out" campaign needs to find ways of winning the argument among the 87 percent of people who did not. Strident euroscepticism won't do it, he says. The clue is in the name. Ukip was founded to make the UK independent of the EU. That's what brought us into politics. We mustn't get distracted. We mustn't confuse ends and means. We should be prepared to work with people across the spectrum who want ultimate power to reside with people answerable to the rest of us rather than Eurocrats.

"There are many decent Green, SNP, Labour, Lib Dem and Conservative voters who share this aim. Are we going to work with them or talk over them?" Asks Carswell, "Are we going to play our part in a positive coalition, making the case for a better future or are we going to drown out messages other than our own?"

The case is there to be made: a global Britain, trading with friends and allies on every continent including Europe. A democratic Britain, able to hire and fire its lawmakers. A free Britain, living under its own institutions. Every action we take over the next 12 months should be to promote that goal.

Concludes the one and only Ukip MP: "All of us Ukip supporters should ask one question. Is what I'm doing at this moment making an 'out' vote more likely? If it isn't, stop it and do something else".

If Ukip can take on board that message, then there is some hope and some room for accommodation. But it has to be a Ukip without Farage.