Booker: united to keep us in the EU 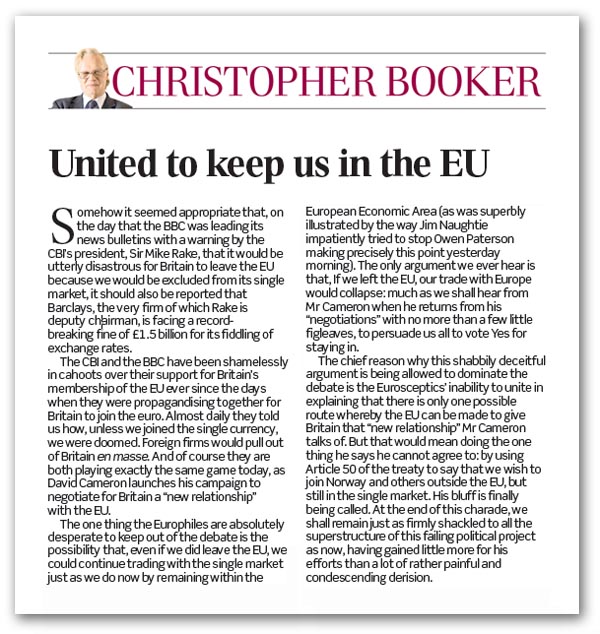 In this week's column, Booker picks up on CBI president Mike Rake, and this thoroughly disreputable bank, Barclays, the very firm of which Rake is deputy chairman. It is, is facing a record-breaking fine of Ł1.5 billion for its fiddling of exchange rates, yet Rake feels he is entitled to tell us how we should be governed.

Booker notes that the CBI and the BBC have been shamelessly in cahoots over their support for Britain's membership of the EU ever since the days when they were propagandising together for Britain to join the euro.

Almost daily they told us how, unless we joined the single currency, we were doomed. Foreign firms would pull out of Britain en masse. And of course they are both playing exactly the same game today, as David Cameron launches his campaign to negotiate for Britain a "new relationship" with the EU.

The one thing the Europhiles are absolutely desperate to keep out of the debate is the possibility that, even if we did leave the EU, we could continue trading with the single market just as we do now by remaining within the European Economic Area (as was superbly illustrated by the way Jim Naughtie impatiently tried to stop Owen Paterson making precisely this point yesterday morning).

The only argument we ever hear is that, if we left the EU, our trade with Europe would collapse: much as we shall hear from Mr Cameron when he returns from his "negotiations" with no more than a few little fig-leaves, to persuade us all to vote "yes" for staying in.

One considerable danger, however, is that the dressing-up of these "fig-leaves" will be so intense that a gullible media will fall for it, and present the Cameron deal as if it was something substantial, just like the treaty that he supposedly vetoed.

But the chief reason why this shabbily deceitful argument is being allowed to dominate the debate, says Booker, is the Eurosceptics' inability to unite in explaining that there is only one possible route whereby the EU can be made to give Britain that "new relationship" Mr Cameron talks of.

Certainly, the likes of Rake are making a big thing about us not having a "credible alternative future to EU membership", only to have Ruth Lea pop up with her utterly mad idea that the post-exit UK could rely on WTO rules, by which – she says - many countries, "including China, very successfully conduct much of their trade".

I wouldn't mind so much if this arrogant woman took the time out to keep herself informed but, as we pointed out, China has a substantial number of agreements with the EU, which transcend WTO rules and are vital for the conduct of trade. Not least is the raft of Mutual Recognition Agreements on conformity assessment, without which the flow of goods would be seriously hampered.

Fortunately – for the moment – many of the "inners" seem as ignorant as to the realities of international trade as is Ruth Lea, but if any of them had to wit to call her out, Mike Rake's claim about the absence of a "credible alternative future to EU membership" would certainly stand if all we had to rely on was this woman's dogma.

For us, though, this is a real problem, where our supposed allies are all over the place, doing – as Autonomous Mind asserts, more harm than good. Nevertheless, Booker wants Cameron to do the one thing he says he cannot agree to: by using Article 50 of the treaty to say that we wish to join Norway and others outside the EU, but still in the Single Market.

Booker also asserts that his bluff is finally being called, although that is not always the case. What we are getting is the likes of Prof Mark Taylor, of Warwick University Business School – who was on the Today programme yesterday, just before Owen Paterson. He told us: "We would be worse off outside the EU because we wouldn't have access to the Single Market".

However, money-grubbing euroids are only part of the problem. With Ruth Lea and many others who regard themselves as the Eurosceptic "aristocracy", strutting their stuff, we stand at risk of remaining firmly shackled to all the superstructure of this failing political project.

As we point out elsewhere, those who are serious about winning this referendum are having to fight on three fronts. We have to deal with the underhanded lies of the pro-EU camp and also the brain-capsizing ineptitude of the Ukip. But there is also the selfish, self-absorbed right-wing think tank "aristocracy" who are neither use nor ornament.

We can only win if the anti-EU movement ups its game and starts doing its homework. But there is also the danger of the campaign being hijacked by Westminster careerist campaigners who get paid either way. Against that, we will have our "credible alternative future to EU membership", but it is pointless doing all that work if it is lost in the noise created by our own side.