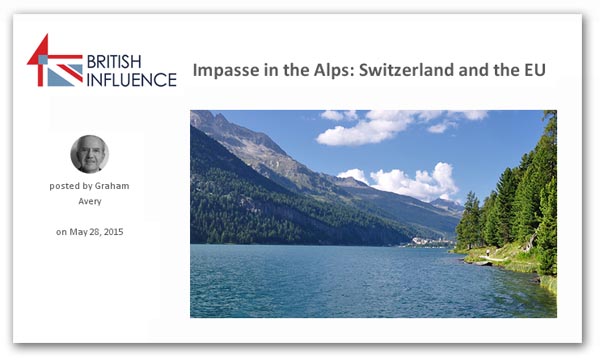 As neat a demolition of the so-called Swiss "model" as you are going to get comes from Graham Avery over on the Europhile British Influence website.
Switzerland's bumpy ride with the EU began in 1992, when its people voted against the European Economic Area, Avery writes. Unlike other EFTA countries, it followed a "bilateral" path, negotiating a series of agreements with the EU, sector by sector, so that it obtained access to the European market by accepting the corresponding EU rules.

Under these agreements, much of EU law now applies to Switzerland. But unlike the EEA, says Avery (not altogether accurately) "which makes EU rules automatically applicable to Norway, Iceland and Liechtenstein", the Swiss model requires fresh negotiations every time that EU policies change.

This situation, Avery claims, has proved frustrating for Swiss business, which has no certainty of access to the EU. But he is correct in saying that it has irritated the EU - to such an extent that last year the EU (including Britain) resolved to make no more agreements with Switzerland unless it accepts a "new institutional approach". This means that the Swiss model must become more like the EEA.

On top of this, Avery continues:

… came last year's referendum on "mass immigration" in which the Swiss people by a small majority (50.3%) instructed their government to impose quotas on workers from the EU. If that is implemented – as it must be by February 2017 – a crisis is inevitable. It contravenes the bilateral agreement on free movement of workers, and if that falls, the other agreements giving Switzerland access to European markets automatically fall.

Faced with this prospect, opinion in Switzerland is deeply divided. Some argue that the bilateral agreements must be preserved. Others say that the country should move forward and join the EU, or at least the EEA. Others are in favour of pulling back from the EU altogether. Signatures are being collected for a referendum to cancel the earlier referendum.

Meanwhile, the Swiss government is playing for time, with national elections due in October, and no compulsion to act until February 2017. Uncertainty about access to the EU is troubling for Swiss business, which fears an economic slowdown. Most commentators agree that relations with the EU have reached an impasse. "The whole relationship between Switzerland and the EU is now in complete uncertainty", says Professor René Schwok of Geneva University.

Essentially, there is no merit in the so-called Swiss "model" as an alternative to UK membership of the EU. It was never really a conscious "model" as such - more of a ramshackle series of arrangements, cobbled together by the Swiss Government after the people rejected membership of the EEA in their 1992 referendum.

And now, with the rejection of the "free movement" provisions, EU-Swiss relations are in crisis, with a deadline for resolution in February 2017. And that timeline puts Switzerland in the frame during the run-up to our own referendum, when the stresses and failings of the model will be high profile.

Yet this failing "bilateral" model is precisely what is being championed by the likes of Daniel Hannan, and formed the basis of all six winning entries for the shambolic IEA "Brexit" competition, judged by the Lord Lawson who understood the concept about as well as he did once the ERM.

This leaves a huge hole in the "eurosceptic" armoury, where many of the campaigners still fail to understand the importance of having a credible exit plan, based on a sound alternative to EU membership.

The Europhiles of British Influence have so far have shown themselves not to be the sharpest knives in the draw, and if they can rip to shreds the Hannan-preferred model already, they will have a field day when the EU insists that Switzerland adopts something closer to the EEA – the very option that the Hannanites have turned their back on.

What we will find though is that, as the EEA option is further strengthened, the options set out in Flexcit will come into their own – which is hardly surprising as so many people have contributed to its development.

That at least is some comfort for, as one corner of the "eurosceptic" argument collapses, there will be a rock of stability that can hold the campaign together. British Influence will not find any easy pickings there. We will eat them alive.