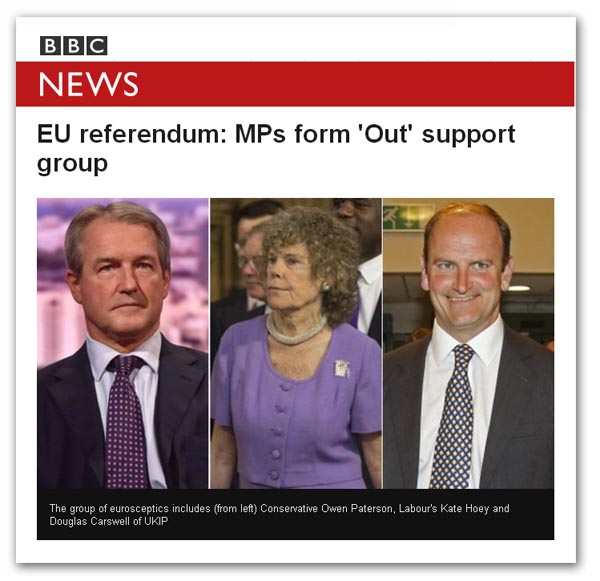 The MPs are listed in alphabetical order and media enquiries are being directed to Kate Hoey, (Chair, Labour for Britain) and Steve Baker (Chair of Conservatives for Britain). However, as senior MP for the committee, Owen Paterson is chairing meetings and is coordinating much of the day-to-day activity.

A report in The Times suggests that Dominic Cummings, former adviser to the Michael Gove, has been recruited to oversee the committee. However, at this stage, the committee has no formal secretariat. It would be quite wrong to suggest that Cummings is in charge. His future role (if he chooses to accept one) has yet to be defined, and he comments on his current role here.

The task of the committee is urgently to seek "to provide resources for crucial thinking and to promote cooperation amongst those who might contribute to a 'no' campaign". In other words, it is exactly as described on the tin. It is exploring the terrain. It is not the "no" campaign, and is not taking an active campaigning role.

Underpinning the committee is a belief that, without fundamental change in our relationship with the EU, it is the best interests of the UK, Europe, the wider world, and the cause of peaceful international cooperation, to the UK to leave the EU and pursuing a different relationship with our EU partners.

However, the committee notes that "there is little if any indication that the government is even asking for significant reform or fundamental change". In anticipation of there being no significant (or any) movement in the June European Council, therefore, the committee is taking certain preparatory steps.

It is conscious that both sides of the referendum campaign will require the creation of substantial organisations to provide voters with a real choice. And in this context, it will be looking at the legal issues arising from the Referendum Bill (eg. rules for "purdah", the impartiality of EU and government institutions and broadcasters, funding limits, designation of "yes" and "no" campaigns, etc).

Specifically, the committee is also looking as how an "no” campaign might best be formed, and how it might be run to inform the public about the issues.

It has been stressed that there is no intention to impose a "top down" structure on the campaign or appoint a grand supremo over the heads of campaigners. This is a genuine attempt to resolve the many complex issues involved in setting up and effective campaign.

Our Referendum Planning Group (RPG) has been kept fully informed of developments, and we are in touch with key players. Our own group will be meeting in London on 30 June and we would welcome contacts from other interested groups.

Alongside the Bruges Group and other component groups, we anticipate that the long-standing Campaign for an Independent Britain (CIB) will play a significant role in recruiting and marshalling "grass roots" activists. We encourage potential activists to contact the CIB or to watch this blog for further announcements – not least for details of a number of "recruitment fairs", where we will be seeking activists to fill specific positions.
Another thing we have in mind is a series of stand-alone functional "cells" to take over specific tasks, such as the social media "rebuttal group" that is in the process of formation. There will also be a number of covert groups, tasked with some other serious activities.

We are encouraged that, within the Exploratory Committee, there is recognition of the need for a comprehensive, and common, exit plan – and the urgency behind the task of producing one is understood. All and any support in this respect that the Committee needs will be made available to it by the RPG.

With it firmly established that this campaign is about free people cooperating freely in a common cause, we see this emergence of the Exploratory Committee (EC!) as a healthy and important step in the development of a formal "no" campaign. There has been much progress in the weeks since the election, and I am confident that we are beginning to work in the right lines.